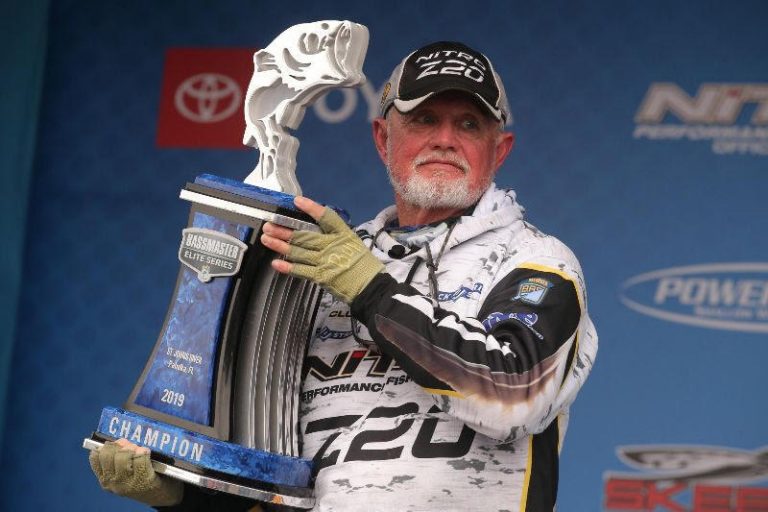 After becoming the oldest angler ever to win a Bassmaster Elite Series event in 2016 on the St. Johns River, Rick Clunn provided what has become one of the most famous quotes in professional bass fishing history when he said, “Never accept that all of your best moments are in your past.”

On Sunday, he walked it like he talks it.

Clunn, who turned 72 in July, broke his own record for agelessness, winning the Power-Pole Bassmaster Elite at St. Johns River with a four-day total of 98 pounds, 14 ounces. His amazing week was punctuated on Championship Sunday with a tournament-best limit of five bass that weighed 34-14.

“I think this just reinforces what I said after I won here in 2016,” Clunn said. “A long time ago, I stopped paying attention to timelines. The terrible twos, the ugly teens, the midlife crisis, retirement time” I don’t pay any attention to any of that.

“If you listen to everybody else, you’ll get premature notions about who you really are.”

This week, there was no doubt about it. He was “Rick Clunn: Legend.”

He joked after Saturday’s semifinal weigh-in that he might need a 10-pounder and a 12-pounder on Sunday to have any chance of winning. While he didn’t quite make those marks, he came close by weighing in two fish over 9 pounds, including a 9-14 that ranked as the biggest bass of the day.

His three key baits all week were a big lipless crankbait from Luck-E-Strike called a Hail Mary, a 3/4-ounce Luck-E-Strike Trickster Spinnerbait with a shellcracker-colored skirt and a Texas-rigged gatortail worm.

“I thought the bream pattern was important for the spinnerbait this week,” Clunn said. “The bass are bedding here, and I know how much the bass really don’t like the bream around their beds.”

The spinnerbait bite improved steadily throughout the week, thanks to a cold front that brought wind and cloud cover to the region. After catching bass on the deeper ends of boat docks in practice, Clunn said the fish had moved so shallow they were under the walkways of the docks by the weekend” and that made for a perfect spinnerbait situation.

In the event that he missed a strike on the spinnerbait, he would follow up quickly with the worm. That was the key to landing his biggest bass Sunday.

“That’s what won it for me today,” he said. “Early in the day, they were eating that spinnerbait really well. I caught a 6 1/2 on it and another one about 4. But then in the middle of the day, I missed three fish on it” and I could tell the third one was a really nice fish.

Even with all that he’s accomplished, Clunn admitted the two giant bass on Sunday got his blood pumping.

“I swung every fish into the boat today except those two 9s,” he said. “When you have to sit there and think about all of the possibilities and it takes forever to get them in the boat it gets your heart moving.”

The two anglers closest in the standings to Clunn were first-year Canadian pro Chris Johnston with 95-2 and veteran Kentucky pro Mark Menendez with 95-1. Johnston said it was an honor to share the stage with Clunn.

“To lose to somebody that you watched fishing for the past 20 years” just to be on the same stage with him” it’s a privilege,” Johnston said. “If I was gonna see anyone else win, I would want it would be Rick. He earned it. He deserves it. He put his time in.

“I can’t complain about second place at my first event.”

Clunn said the question of when he’ll finally give up fishing is “a dirty question.” He’s looking forward to next week’s Toyota Bassmaster Elite at Lake Lanier in Georgia and has no plans of slowing down anytime soon.

“A lot of stuff off the water is old to me,” Clunn said. “But when I go on the water, it’s brand new, just like it was when I started. I love it just as much as I ever have.

“It’s an incredible thing to go out every single day and know that you’ve gotta figure them out. This amazing study of natural rhythms and how all things are connected” I can’t see myself ever getting tired of that.”

During a tournament when giant fish were weighed in all four days, the Phoenix Boats Big Bass of the week was caught during Thursday’s opening round. The honor went to Virginia pro John Crews for the 11-2 largemouth he caught on Day 1.

Rookie pro and former college fishing champion Patrick Walters of South Carolina was fourth with 91-14, and Crews was fifth with  89-11.

The Elite anglers hit the St. Johns River fishery at its peak. The 75 anglers caught 158 five-bass limits and weighed in 893 bass totaling 2,927 pounds, 8 ounces of bass. With an average weight of 3 1/4 pounds and the largest weigh-in crowds in the history of St. Johns Bassmaster tournaments, the event more than lived up to the theme of the 2019 Elite Series: “Big Bass. Big Stage. Big Dreams.”