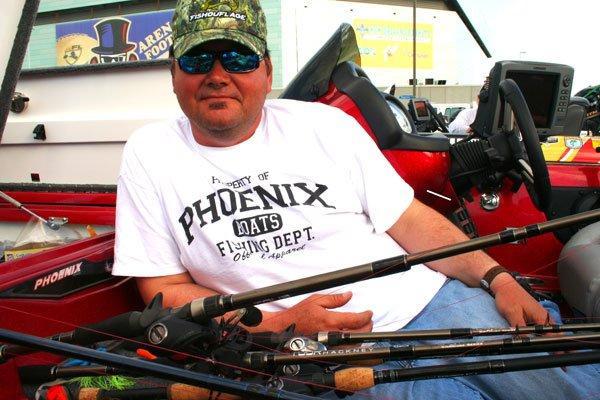 Greg Hackney grew up in southeastern Arkansas, but for the past eight years, the New Orleans Delta region has been his home.   â€œI live in Gonzales, it’s 47-minutes from my driveway to the boat yard here at the Classic in downtown New Orleans,â€ said Hackney.

While the rest of the Bassmaster Classic competitors have bedded-down in a high-rise hotel this week, Hackney has slept at home. You see, Hackney is a family man. And like a lot of us, the more time he spends with his wife and three kids under their own roof   — the better his soul feels.

Hackney’s soul also knows what urgency, stress and gallons of adrenaline feel like in relation to New Orleans. Don’t forget, it was Hackney that conducted a heroic and dangerous rescue mission of his father-in-law Andy Hillery from a flooded mess during Hurricane Katrina.

â€œI really haven’t thought much about that this week, really, I’m caught up in the Classic. I’m refreshed by how nice the city looks compared to what I saw then.   It’s not that I forgot about it though,â€ said Hackney.

Hackney also hasn’t forgot about the fact that bigger than the hype that surrounds this week’s Bassmaster Classic are long-term issues such as the erosion and unhealthy change that is eating away at the ecological goodness of his beloved backyard fishery.

Sure, we talked fishing. We talked about how fans can count on him to spool 50 to 65-pound Cajun Red braided fishing line on to a Quantum Smoke reel, mounted to a nearly 8-foot long Tour Hackney flipping stick, and attempt to swing a fat limit into the boat.

But then he shifted quickly to concern about the future of that fat limit. Not next week â€“ concern about five or 30 years from now. â€œErosion and saltwater influx threaten to vanish this paradise. If it weren’t for the Davis Pond Freshwater Diversion project we’d all be fishing in Venice this week, because I don’t think any of these other areas would be ecologically healthy enough to count on catching a bass in them,â€ said the long time Quantum pro, with an intense look of concern in his eyes.

For Hackney, it’s good to be here. He’d love to win on his home-field, but he also wants the home-field to be taken care of too. Not just this week, but well into the future. This is home.