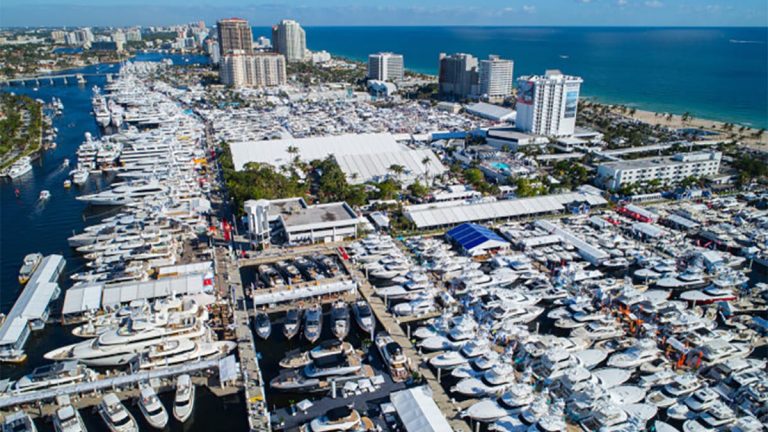 Brunswick Corporation (NYSE: BC) has announced that its Sea Ray, Boston Whaler and Mercury Marine brands have set multiple records during the 2019 Ft. Lauderdale International Boat Show. Sea Ray, which launched an all-new 320 Sundancer Coupe at Ft. Lauderdale, saw a massive 80 percent increase in show sales from a year ago, demonstrating the success of its reinvention strategy. Boston Whaler continues to benefit from significant year-over-year sales growth in September and October, leading to a very successful Ft. Lauderdale boat show which saw the launch of the flagship 405 Conquest and the 325 Conquest and increased show sales on boats 33′ and above.

For the third consecutive year, Mercury Marine substantially grew unit share at the show and had more engines on display than any other manufacturer. In addition, for the first time, more than half of the engines in the on-water portion of the show at the Bahia Mar were Mercurys. Several OEM’s showcased new partnerships with Mercury, while others increased the percentage of Mercury outboards and sterndrives on their boats.

“Ft. Lauderdale is one of the largest and most important boat shows in the world and an opportunity for Brunswick to showcase new products and new technologies from our premium boat brands and Mercury Marine,” said Dave Foulkes, Brunswick Corporation Chief Executive Officer. “The tremendous success we had this year at the Ft. Lauderdale Show is a great confidence builder for the 2020 Season. Sea Ray and Boston Whaler continue to execute on their strategic initiatives, resulting in outstanding new products with leading-edge technology, along with increased sales and brand recognition around the world. Mercury continues to gain market share with its industry-leading high-horsepower outboards and commitment to creating a unique ecosystem of innovation.”

“Beyond great new products, in order to maintain our leadership position and continue to grow our business, we need to have the most advanced innovation capabilities, and a leading portfolio of service and shared-access businesses,” said Foulkes. “We don’t take our position in the industry for granted; we wake up every morning thinking about how we can provide more access to boating and a better boating experience.”

During a Brunswick press event at the Ft. Lauderdale show, Foulkes also announced that the Company will make its debut as an exhibitor at the 2020 Consumer Electronics Show (CES) in Las Vegas, January 7-10, 2020. Brunswick will highlight its marine technology leadership and illustrate how its ACES strategy which provides an umbrella for its initiatives in autonomy, connectivity, electrification and shared-access will help define the future of the marine industry.

“With our leadership position in marine technology, it is the right time for Brunswick to actively participate in the largest electronics and technology showcase in the world,” said Foulkes. “Participating at CES will demonstrate that the latest generation of marine technology is absolutely worthy of a place alongside other transportation and consumer technologies.”