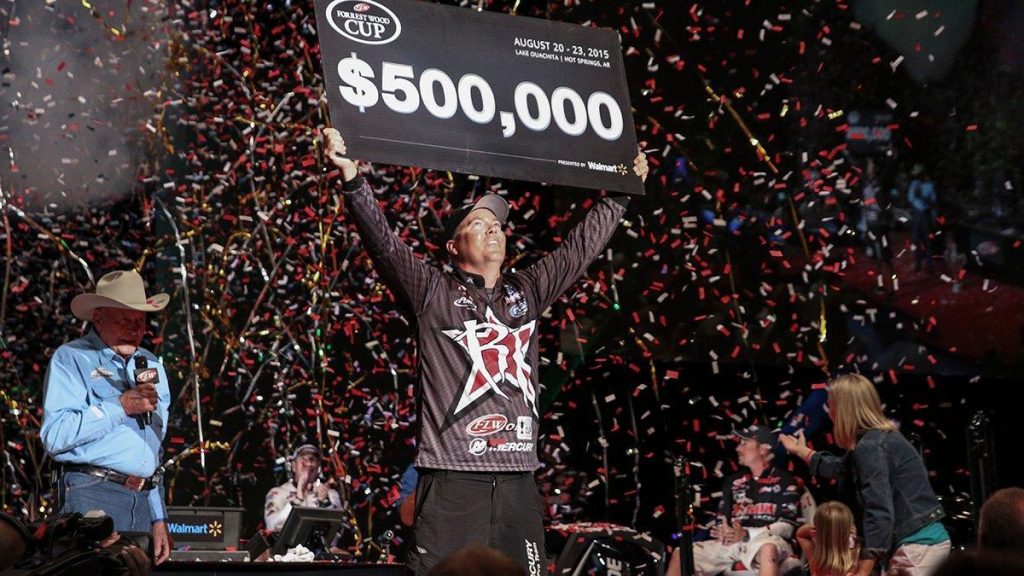 Brad Knight won the 2015 Forrest Wood Cup title on Lake Ouachita near Hot Springs and the $500,000 first place prize with 20 bass weighing 51 pounds, 12 ounces. This was just his second Forrest Wood Cup, and he bested the Rookie of the Year, a Bassmaster Classic champion and two former Forrest Wood Cup champions.

“It’s so humbling to be able to have my name up there next to Scott Martin, Jacob Wheeler as Forrest Wood Cup champions,” Knight said. “This is a life changing event for me. I might not ever catch another bass from here on out, but no one can ever take this experience and this title away from me.”

Brad Knight fished one primary area all week on the lower end of the lake. He was physically and emotionally drained at the weigh-in. He felt like not catching a big one on the final day was going to keep him from winning. Each day was a little different but he kept make adjustments in his area. He felt confident that his area was the right area. He fished in the Blakely arms on the lower end of the lake.

The crazy thing this week was he got two keeper bites the first morning of practice. The next two days he never caught a keeper anywhere else on the lake. So to start the tournament, all he had was the one place where he got two bites. He got on a little buzzbait deal catching them out of 3 feet of water in the back of the creek where he had some bites in practice. The back of the creeks in his area had a little cooler water.

Brandon Cobb and Mark Daniels Jr also fished the same area. Daniels Jr. left most of the area to Knight on the final day to close it out.

The key was his creek had creek run ins that had fish that had not been messed with for months. The tornado had put a lot of trees back in the back of the creek. He fished some visible laydowns flipping the first day of practice, caught some on a crankbait and didn’t think the spot was that special.

He started the tournament fishing in the back of Blakely Creek. He flipped a drop-shot rigged straight-tail worm around the laydowns. He started running some of the mud banks in Blakely with a buzzbait. He culled out everything and got confidence in what he was doing.

The second day the drop shot caught 4 of the 5 and only one of the buzzbait. The third day he was fishing the trees under the water and casting a long ways to where the root wads were under the water that you couldn’t see above the water. He would see a dark spot as he fished and would mark a waypoint so he could come back later and cast to it before he would get to it.

He had 8 or 10 laydown logs that were his “prime time” logs. The first hour today he thought it would be prime because it was before boat traffic got in his areas. Today it didn’t happen. The pressure on the third day changed things. He started flipping and pitching a beaver and a drop shot around the trees to fill out his limit.

Today he was able to able to crank a 10-year-old homemade east-Tennessee squarebill that he and Craig Powers made together, and he was able to cull several fish. The drop shot was his most consistent all week but the homemade crankbait saved the win today. He had been wanting to catch them on the logs all week on the crankbait, and today was the only day they bit it.

Ramie Colson Jr. fished the way he liked to fish. He fished Zoom Ol’ Monster worms in Plum Apple and Blue Fleck colors around and through brush piles all week which is what he’s best known for in fishing circles.  He found one creek in practice where he multiple bites in practice and stayed in that creek.

He fished brush piles from 10 to 16 feet deep in the back of a creek. He had a limit spot in the back of the creek where a ditch ran up onto the flat but that spot dried up on the third day. The rain and clouds hurt his brush pile pattern this week on Ouachita. The sunshine positioned the fish on those piles. He had several anglers fishing around him but no one else was in the brush piles like he was.

The Garmin Panoptix enabled Ramie Colson to make the first cast dead on the pile this week and made fishing more efficient.

Brandon Cobb new the tournament would be a grind because he had such a bad practice. He fished the same general area as Brad Knight but the same fish that Brad found. It was the only place he had more than 3 keeper bites on in practice. He caught his fish the first 3 days fishing down his flat banks with the buzzbait and then came back down the bank fishing slower and out a little farther with a Zoom Ol’ Monster.

The second day he fished a Lucky Craft Gunfish and caught them fishing small indentations leading into timber pockets. But fishing was tough.

But today he fished new water and caught 20 bass. He lost three bass to start the day. Then he started catching them and never stopped. Today he tried every topwater he had in his boat as the fish came up schooling for a long time in one area. He finally settled on an old, rusted Sebile Bongo Minnow.

Jacob Wheeler had a good area to start the tournament where he had seen some spotted bass schooling in practice. He rolled in there the first day and some big largemouth started schooling and he caught them quick on an Arashi Top Walker on 17-pound monofilament line and Okuma rod and reels. He caught schoolers the first day and then that pattern became a schooler in the morning and running the bank the rest of the day with the same bait to try to hunt big ones.

He caught fish on an under spin and a swimbait around schoolers when they weren’t busting on the top.

Scott Martin relied heavily on his electronics, namely the new technology from Garmin called Panoptix that is a forward looking sonar where he could see schools of bass when they weren’t on the surface busting shad and cast a swimbait or topwater over them and catch those fish others were missing.

He found a big school of schoolers in practice and never really found anything else in his practice. He caught all his fish on a Fish Head Spin with a Keitech 3.3 Pearl Blue Fat Swing Impact swimbait on 8-pound fluorocarbon. He caught some up the river on a Tightline UV 10-inch worm and Strike King crankbaits.

Later in the tournament he caught some a Tightline UV swimbait on a small jighead. Martin picked up a buzzbait and started running new water on day four. Oddly enough he was throwing Jacob Wheeler’s signature buzzbait to catch his last two fish on the final day.

Bryan Thrift had a limit spot where he has caught 70 bass this week most on a Damiki DC-300 crankbait on 12-pound P-Line fluorocarbon. But a lot of fish were small. He caught a few off it before a big storm hit on the final day on a Damiki Sneak on 15-pound fluorocarbon, then came back and finished out his limit. After that, he went and threw a Damiki Frog and buzzbait and topwater lures for 5 hours to try to catch a big one and never had another bite. The main lake bite was dead for him all week. Everything he caught was way back in the creek.

Larry Nixon was one of a few anglers that fished grass on the lower end of the lake for much of the tournament. The first day I caught them flipping the edges of grass with a Yamamoto Slim Senko. Then he switched to a Biffle Bug and a Yamamoto Flappin Hog on 3/4 ounce weight.  On the end of day two I found some fish on the tip of a point with some grass.

The third day he caught three big ones off that tip. Today he had one little squeaker spotted bass he caught on a shaky head and finally picked up a Yamamoto Shibuki popper and starting working the bank fast and furious and caught 3 fish and two were big ones to stay in the hunt.

Zack Birge caught his fish running two areas on on opposite ends of the lakes but he was running way back to the back of the creeks fishing a 1/4 ounce Santone buzzbait and a soft plastic toad. The rain and cloudy conditions helped his bite and fired them up first thing the final morning. He fished as far back in the creeks as he could go most of the tournament. He had a great tournament practice and was fired up for the event.

Mark Daniels found a spot in the last two hours of practice fan casting a Rat-L-Trap on a flat that ended up being the area he fished all four days of the tournament. He caught all his fish this week on a drop shot Robo Worm in Aaron’s Morning Dawn on 6-pound Seaguar Tatsu line.

He fished the same area all week with Brad Knight. Today he left “the juice” to Knight to start on and Knight cleaned the area out.

Chris Baumgardner was catching his fish on one end of the lake all week, but he knew he couldn’t win in that area, so he made a big gamble and ran to the opposite end of the lake to run new water and look for big ones in new areas. He decided to pick up a bait and cover water and the gamble just didn’t pay off today.

Photos by Jason Sealock and Walker Smith for Wired2fish