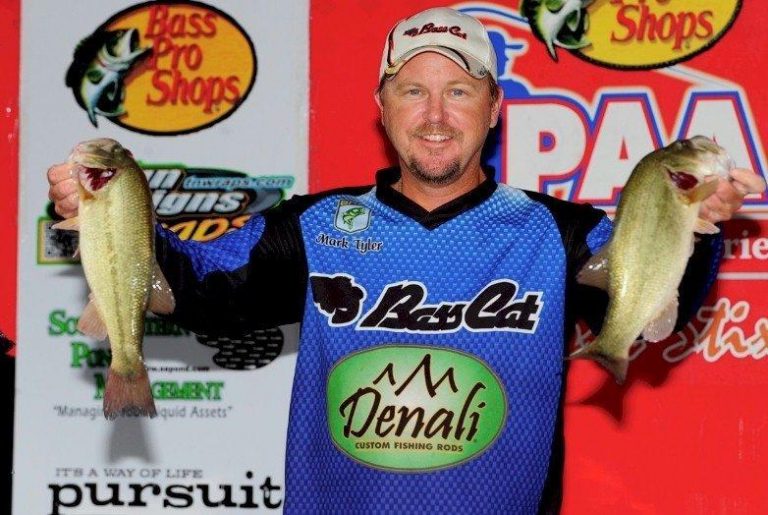 It didnâ€™t take long for Tommy Biffle to establish himself as an angler to watch this week at the final tournament of the season in the Bass Pro Shops PAA Tournament Series presented by Carrot Stix on the Arkansas River out of Muskogee, Oklahoma.

The Wagoner, Oklahoma veteran was one of the pre-tournament favorites, and after finishing the first day of competition in 2nd place, it became apparent that he planned on living up to the expectations.   Biffle took the lead on Friday, toting the tournamentâ€™s heaviest limit the scales weighing 16.37 pounds.

Each day, Biffle made a long run before navigating a shallow backwater area that required an hour-long idle just to reach his primary water.     â€œI knew that I needed to catch them quickly because I didnâ€™t have that long to fish,â€ explained Biffle, who averaged about five hours of actual fishing time each day.   â€œMy plan was to get in an area where I knew the fish hadnâ€™t been bothered by the other competitors.â€

Even though he relied on one primary area, Biffle said that his bite changed each day. â€œThe first day, the fish were holding on stumps because the sun was shining. Yesterday, the water came up a little bit and the fish moved to hanging brush in the water. Today, I caught some good ones off of logs in the water,â€ he explained.

Saturday didnâ€™t start well for Biffle, who lost his first two keeper bites before settling down.   â€œI thought that I might be in a little bit of trouble because I was worried about getting five keeper bites today,â€ he explained.   The lost opportunities didnâ€™t prove to be costly as he ended up culling through 10 keepers.

For the duration of the tournament, Biffle flipped a Gene Larew 4.25â€ Biffle Bug in Blackberry/Sapphire color.   He Texas-rigged the offering on a 4/0 Paycheck Baits Punch Hook with a 5/16 oz. bullet weight.     He used his signature series 7â€™6â€ Quantum rod with a Quantum Exo reel spooled with 25-pound-test Sunline Shooter fluorocarbon.

â€œThis was the only PAA tournament that I was able to fish this year, so I was fishing for the win because I didnâ€™t have to worry about fishing for points to make the TTBC (Toyota Texas Bass Classic),â€ said Biffle.

After recording a Bassmaster Central Open on the Arkansas River out of Muskogee in 2011, Biffle was unable to come up with a reason as to why his is so dominant on the fishery.   â€œThe only time that I ever fish the river is when we have a tournament here,â€ he stated.   â€œIâ€™ve never really just fished it for fun because itâ€™s a place where you can really tear your stuff up or lose a lower unit.   I like river fishing and flipping cover, and thatâ€™s something that works here.â€

Vian, Oklahomaâ€™s Mark Tyler also relied on years of experience on the Arkansas River to post a 2nd place finish.   With a limit on Saturday weighing 12.64 pounds, he finished with a total weight of 38.75 pounds.

â€œI knew that I was fishing for 2nd place today,â€ he candidly stated after Biffle ousted him from the Nitro hot seat in front of the crowd gathered at Bass Pro Shops in Broken Arrow, Oklahoma.   â€œThe only chance that I had was if Biffle stumbled, because I felt confident that I could bring in another 12 to 13 pounds.â€

While Biffle banked on one area, Tyler used a run-and-gun approach throughout the week.   â€œThere are just certain stretches where the fish hang out,â€ he explained.   â€œEverything looks good on the surface, so you have to put in a lot of time on the water to identify the best stretches.â€   He boated around 15 keepers each day of the tournament.

Tyler keyed on shallow water targets that included lily pads, grass, and isolated laydowns.   â€œIt was simple river fishing.   My success this week came down to the sheer number of spots that Iâ€™ve found over my years fishing the river,â€ Tyler stated.

â€œSubtle current was also really key,â€ he continued.   â€œEven when a little rain shower moved through and the wind created a small ripple around a target; Iâ€™d run over and fish it.â€   He relied on a Rapala DT3 crankbait in shad color, 3/8 oz. War Eagle spinnerbait in shad color, and several Texas-rigged soft plastics.

Mark Rose, who entered the final day in 2nd place, finished in 3rd place after weighing a 12.51 pound limit on Saturday to boost his total weight to 38.64 pounds.

Locking down one pool, Rose said that he spent the majority of the tournament in the largest creek that he could find.   â€œI fished grass and just kept looking for one really big bite,â€ he explained.   â€œI had several milk runs where I could catch smaller fish, but I really tried to stay in the areas where I thought that I could get the bigger bites.â€

Keying on water-willow and bank grass in less than three feet of water, Rose relied on a Strike King KVD 1.5 crankbait in Pearl/Black Back and a 4.5â€ Strike King Coffee Tube in Black Neon.   â€œThere were a lot of little targets where there wasnâ€™t any bait, so I sought out the targets that had more shad holding nearby,â€ he concluded.

In the Angler Of the Year race, Gary Clouse took the title.   After finishing in 31st place this week and missing the final day cut, Clouse could only watch and wait as two anglers who made the top 10 cut, Mike McClelland and Greg Vinson, each had a chance of tracking him down. 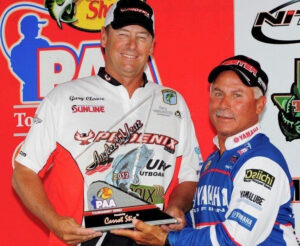 McClelland stumbled, bringing just one bass to the scales to finish in 10th place.   Vinson, who needed to win in order to catch Clouse in the AOY race, finished in 6th place.

Over the course of the PAA Tournament Series season, Clouse recorded finishes of 2nd place at the Tour Team Event on Lake Toho, 26th place at Old Hickory Lake, and 6th place at Neely Henry Lake.

â€œI really thought that I blew it when I finished in 26th on Old Hickory, my home lake,â€ he admitted.

â€œI feel very fortunate to have won this.   My goal at the beginning of the year was to qualify for the Toyota Texas Bass Classic.   I made it last year and I really wanted to get back to that great tournament so I worked really hard to prepare for all of the tournaments this year.â€

Clouse, who is the president and founder of Phoenix Bass Boats, said that the hard work paid off.   â€œThere are a bunch of really good fishermen out here,â€ he explained.   â€œWhen Iâ€™m fishing against this caliber of anglers, I feel like I have to work really hard because Iâ€™m not as good as they are.â€

Along with the AOY trophy, Clouse earned free entry fees for the 2013 PAA Tournament Series season valued at $6,000 and two Minn Kota Talons.