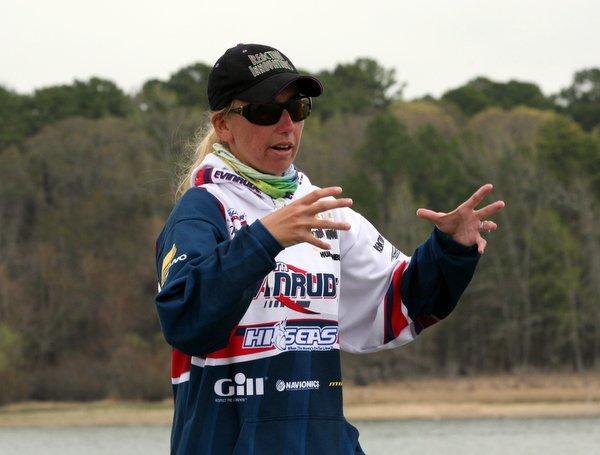 29-year-old Kim Bain-Moore keeps adding to her list of â€œfirstsâ€ as today she won the first ever-regular season Lady Bass Anglers Association tournament on Texas’ Sam Rayburn.   Bain-Moore added 14 pounds even to her day one total of 20.94 pounds to give her 34.94 and the win.

â€œI felt like I could catch a limit, and yesterday, I set my goal around 12-15 pounds,” Bain-Moore said. “I figured that would keep me in it. I caught my five yesterday fairly quickly, and the big ones all bit in about a 30-minute window.

â€œBased on the good fishing I had there yesterday, which was on a Revenge green pumpkin vibrating jig   with a Reactions Innovations Dirty Sanchez Skinny Dipper as a trailer.   Today I went back to the same spot intending to do the same thing and get my fish early before the wind blew.â€

â€œI only caught one keeper and was beginning to get slightly worried. I then watched my co-angler catch three pretty nice fish on a Senko. I then saw a recreational angler catch one up shallow too and finally the light bulb came on.â€

â€œI took my watermelon with red and black flake Senko and drenched it with Smelly Jelly and was able to get my limit and culled two.â€

She took home $7,000 for the win plus the big bass award for the pro angler side.

â€œThis feels really wonderful.   It is a tremendous honor to win this LBAA event and I love coming and seeing all the ladies and hanging out with them again,â€ she added.

Over on the co-angler side of the LBAA Texas ProAm Diana Uebelhack just like Bain-Moore, took the day one lead and never looked back heading on to claim the title of 2011 LBAA Texas ProAm Co-Angler Champion.

“This couldn’t have been any better,” an emotional Uebelhack proclaimed after the event.   â€œI’ve never won something like this so people cannot even have a clue as to how excited I am.   I have to thank everybody that is around me — my family, my daughter Erica, my husband â€“ they all have been so supportive of this and of me.â€