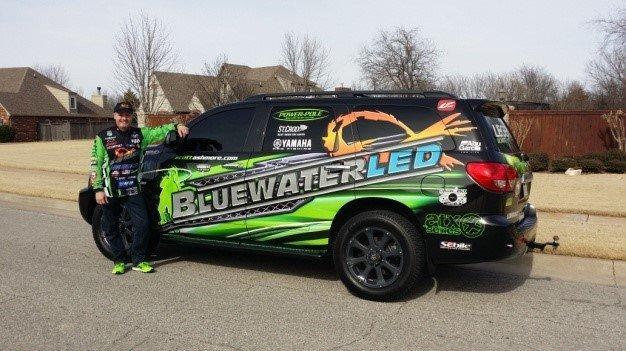 Competing with the world’s best anglers on  the BASS Elite Series tour for several years now, Scott Ashmore takes his full time career as seriously as anyone devoted to their job. To compete at this level requires an enormous level of commitment and dedication, and the best equipment available.

While Scott has been known in recent years as having one of the sharpest and most functional boats on tour, this was not merely by chance. Realizing the advantages  of a high performance LED lighting System, Scott turned to the industry leader Blue Water LED,  and a relationship was formed, which led to  a title endorsement for 2014.

I’m very proud to be a part of Blue Water,” said Scott, “The  products are  designed designed by fishermen, for fishermen. The Deck Lighting Systems are fully  controllable so I have the perfect level of lighting, and the way they light my compartments is incredible! Perfect lighting without being blinded. The trailer lighting makes it easier and safer to load and unload, and I’ll admit, adds some bling while highlighting my sponsors!”

“Most importantly,” Scott adds, “They stand behind their  product and their customers with a Lifetime Warranty. How many companies do that nowadays?”

“Scott’s passion for the product and commitment to the sport make him a great addition to the Blue Water Team,â€ states Jeff Hillard, Co-Owner of Blue Water. “Scott’s very focused and has strong Christian faith and family values. He’s a great asset to our team.â€

â€œWe’re on a mission to increase the safety and performance of every angler out there,â€ Scott said, â€œAnd we have a lot of guys jumping on board with us. Some of the best in the business are running Blue waters, including Randy Howell, Brent Chapman, Aaron Martens, Fred Roumbanis, Shaw Grigsby, Jarred Miller, and many more have joined the team!â€

To learn more go to  www.bluewaterled.com