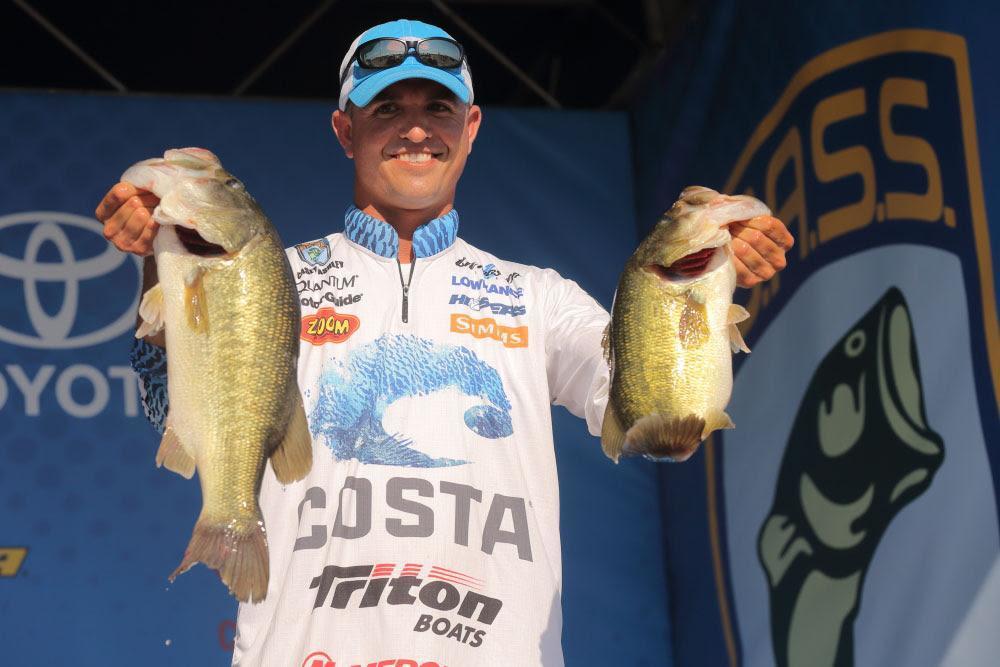 After a very difficult and unproductive practice, Casey Ashley of Donalds, S.C., “just went fishing,” and put together the day’s heaviest five-fish limit of bass that weighed 20 pounds, 1 ounce. His lead eclipsed Chad Morgenthaler of Coulterville, Ill., who is in second place by only 11 ounces with a total of 19-6.

Ashley’s limit included the tournament’s current Phoenix Boats Big Bass that tipped the scales at 6-15. If the 2015 Classic champion can hold the big-fish lead for the duration of BASSfest, he’ll earn a $1,500 bonus.

“I had no idea I was going to catch them that good today,” Ashley said. “The first bite of the day was my big one, and when you start things out with that kind of momentum, it really helps you to settle in and make good decisions for the rest of the day.”

The South Carolinian is unsure if he can replicate today’s success on Thursday, but he’s sure going to try.

“All I can do is just put the trolling motor down, keep my head down and go,” he said. “I’ve found that there really isn’t a good way to predict where the bites will come from. Covering water quickly and making accurate casts seems to be the key to finding the big fish, and I’m going to do my best to make it happen again tomorrow. “

Unlike Ashley’s unproductive practice, Morgenthaler located his fish earlier in the week.

“I started my day on what I felt was my best spot, but it didn’t turn out that way. I relocated to another spot that I found during practice and caught a limit pretty quickly. Being able to make some key upgrades as the day went on really helped me put together a solid limit,” Morgenthaler said.

He said that he caught a lot of fish today, and will be starting Thursday off with “comfortable confidence.”

He thinks the receding water should improve his pattern, but the lake is changing by the hour and he knows that he’ll have to adapt quickly to stay on the bass.

As of 5 p.m. CT, Texoma was measured at 625.48 feet (above sea level) with normal full pool measuring at 619 feet. The reservoir’s current release rate is 41,900 cubic feet per second, which has created quite a riffle below the dam. That means the lake level will be steadily decreasing. Those who adapt the quickest will likely finish the strongest.

Local favorite and 2016 Bassmaster Classic champion Edwin Evers of Talala, Okla., will begin Thursday’s second round of competition in third place after weighing in 18-8.

“Today was a grind. It looks good on paper, but I only had five bites all day long,” Evers said. “Practice was crucial to how and where I fished today, but with the water going down I’ll have to adjust throughout the day — and I think I can do that. ”