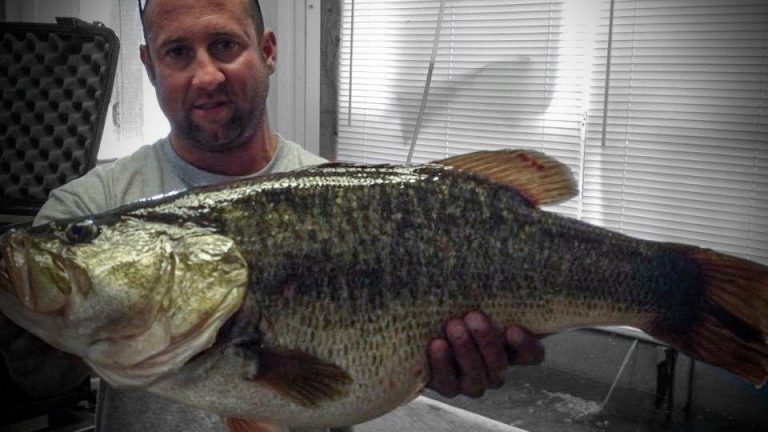 Dannie Golden had been having a good week of fishing on Lake Ray Roberts in Texas. But it got a whole lot better today when his client, Shannon Elvington of Pilot Point, Texas caught a 15.18-pound largemouth bass that set the lake record.

The water temperature was 45 to 46 degrees on Ray Roberts, which is unseasonably cold for a lake that far south. The fishery is not typically known as being a coldwater lake and a lot of people wonâ€™t even try fishing this time of year.

â€œThe last few days have been crazy good for me,â€ said Dannie Golden, guide and owner of Get-Bit Guide Service. â€œI had a client yesterday catch a fish weighing more than 10 pounds on The Alabama Rig. Then today, I caught a 10 and my client caught a 15.18-pound lake record. This was my second day out in my new Triton boat. So the first day in the new boat my client catches a 10-pounder. Then the second day in the boat we catch a 10 and a 15-pound lake record.â€

Ray Roberts has zebra mussels, which have made the lake very clear. The lake is really low and there is a lot of cover in the form of standing timber, hydrilla and milfoil. The fish, according to Golden, are as healthy as he has seen them and he believes the clear water has helped improve both the fishing and their diets.

â€œWe were catching fish on jigs, jerkbaits and umbrella rigs. Todayâ€™s fish was actually caught on a Lucky Craft jerkbait on Berkley 100% fluorocarbon 12-pound line. The 10 pounder we caught yesterday actually had mud on its belly. I think these fish are coming up out of deep water because they can see so far and eating.

â€œHe hooked the fish on a long cast and I saw it flash way out there and immediately went for the net. He got fish up close and she made a little run around the boat. He did a great job playing her down. This was the second fish he had ever caught on a jerkbait. The fish bit around 10:45 and I had just boated the 10 pounder at 9:45.

They called ShareLunker and then went and waited at the Ray Roberts Marina. The marina went to work to accommodate and keep the bass alive until the Texas Parks and Wildlife Department could get there to check and transport the bass. They actually moved all of their livebait out of one tank to make a place for the fish to be calm and rest.

â€œIt was an amazing experience,â€ Golden said. â€œIâ€™m so happy for Shannon. Heâ€™s just getting back into fishing again having grown up fishing on the lake his whole life. The power of the viral nature of social media is crazy. It was just amazing how many people heard about it and came up to see the fish. There was a steady line until TPWD showed up.

â€œWe didnâ€™t even get measurements or pictures of the fish until TPWD got there because we didnâ€™t want to handle the fish at all or take a risk in hurting it or stressing it out too much. We let them handle it and took pictures when they got there.â€

Weâ€™ll update the story with any other details we get about the catch as they come in. You can visit Dannie Goldenâ€™s guide service at get-bit.com. 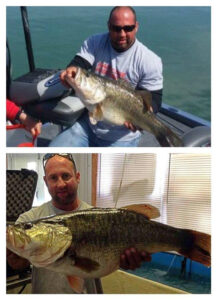