Derek Turner and friend Brandon Hembree of Caryville, Tenn. didn’t expect to catch their biggest bass ever in rain storm much less a largemouth just shy of the state record by 1 pound, but that’s exactly what happened on Jan. 19, 2019 on Lake Chickamauga. Turner caught a largemouth bass weighing 14.2 pounds that measured 23 inches in girth and 27 inches in length.

We caught up with Derek Turner on the night of his amazing catch.

“We had a good feeling the day was going to be a good one,” Turner said. “With a cold front moving in that night, we felt like the big fish would be active. I was surprised how little boat traffic there was on the lake, but one thing we preach to each other is we can’t let the weather affect us. When tournament day rolls around, you have to be able to compete at a high level no matter how cold, wet, windy or hot it may be.”

They were targeting specific depth changes off the main channel with the boat sitting in about 6 feet of water. The water was 46 degrees. That had a 3 1/2-pounder right off the bat. Turner dropped his Power Poles because they frequently catch more than one keeper off a spot like that this time of year.

Two casts later he hooked the big bass. When he set the hook the fish didn’t budge and he was surprised he didn’t break his 17-pound Seaguar AbrazX. Then the fish started pulling drag and then knew they had something big on the line. It came up, swirled and they realized they had a giant bass.

“My partner did a great job netting the fish, and when we got her out of the water, Brandon said, ‘that’s a dang state record!'”

Turner weighed the fish on a Rapala Tournament scale and it hit 14.2 pounds, so they knew it was big enough to merit being verified on certified scales with witnesses. They actually stayed on the spot and caught 4 or 5 more fish before the anticipation got to them and they ran back to Dayton Boat Dock to get it weighed on certified scales.

Turner and Hembree put Rejuvinade in the livewell and eased their way to the dock. Once he had it weighed there at 14.2 pounds and took a few quick photos, he put the fish in the livewell and ran her all the way back to where he caught her to be released for another angler to catch one day.

Turner is planning to have a replica mount made of the fish. 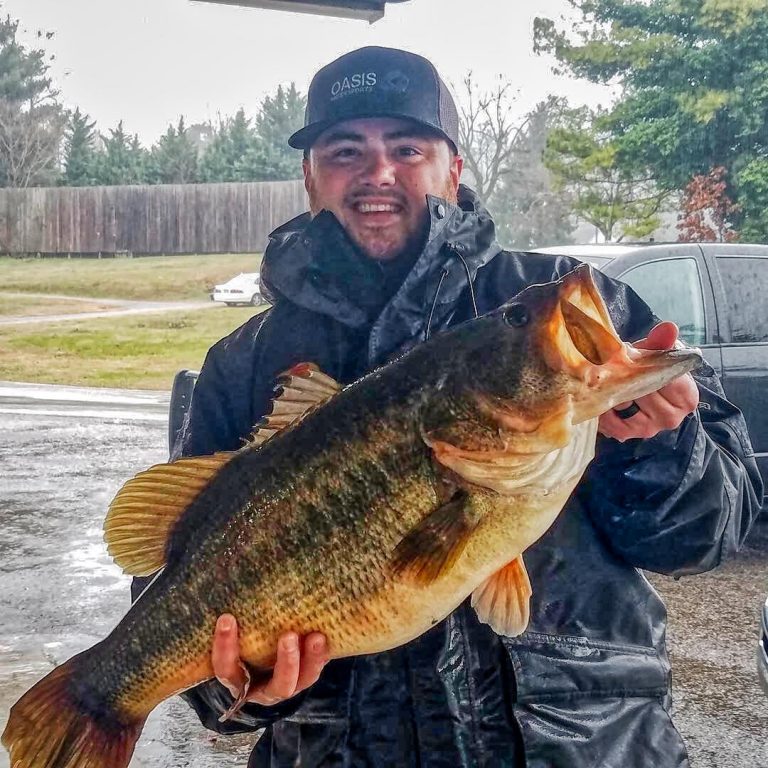 Derek Turner caught the bass on 17-pound Seaguar AbrazX line, with a Shimano Curado DC reel and a Skeet Reese Heavy Cover rod out of his Nitro Z19 bass boat with a 200-hp Mercury ProXS with Power Poles pulled by his Toyota Tundra.

They are keeping the bait details to themselves for now as they were practicing for the Tennessee Team Trail Bass Tournament coming up next weekend.

Congrats Derek and Brandon on a once in a lifetime bass!