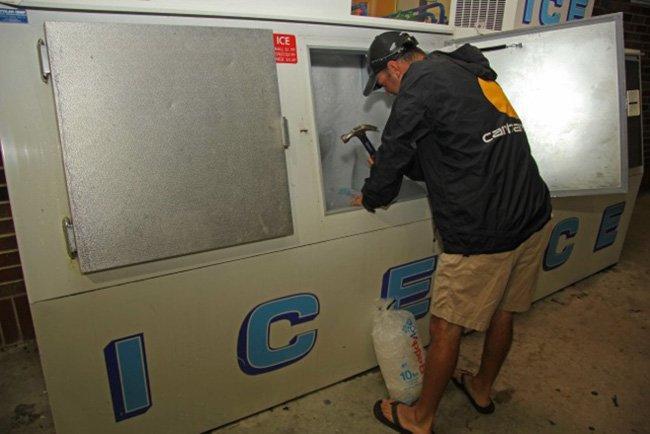 2012 Carhartt Bassmaster College Series National Champion, Matt Lee has seen a lot of success across just 25 birthdays. An engineering major from Auburn, he now finds himself atop the Bassmaster Opens points standings. In fact, if he does well this week on the Arkansas River, he’ll likely qualify to fish as a full-time pro on the 2015 Bassmaster Elite Series. A great guy, he took us along as he practiced for this week’s career shaping event.
6:15 a.m. — Matt knows it’s gonna be a hot one in eastern Oklahoma, so ice is a priority en route to the boat ramp, but the bags are frozen together. No problem, the Carhartt angler isn’t scared to do work. He finds a hammer in the toolbox of his boat, and solves the problem. 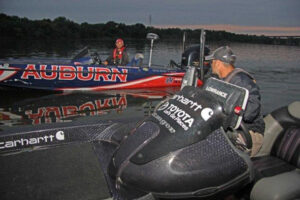 6:55 a.m. – Matt visits with Jordan Lee about what specific areas of the Arkansas River they’ll practice as they idle out of Three Forks Harbor in Muskogee. The brothers really ramped-up bass fishing together when they were at Cullman High School in Alabama. 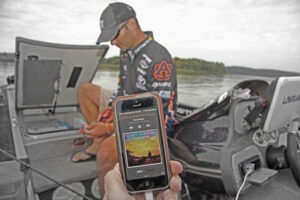 7:55 a.m. – Matt Lee is a music man. He’s got speakers in his boat, and is blaring Chesney’s new “Flora-Bama” tune as he spots buddy Darold Gleason of Toledo Bend and the two trade humor-filled smack talk across The Arkansas. 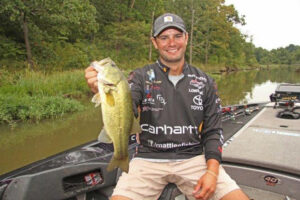 9:35 a.m. – A smorgasbord of species bite in a 20 minute flurry, including a fat drum, a tiny channel cat, a tiny largemouth, and finally, a nice largemouth that’ll push 3-pounds. 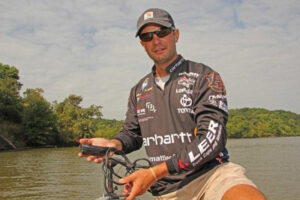 10:15 a.m. – The Arkansas River is filled with wood habitat, and it proves unforgiving as it rips the transducer off the bottom of Matt’s trolling motor. 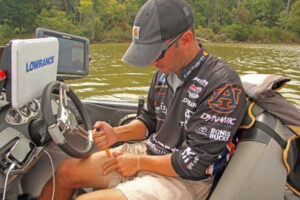 11:15 a.m. – Time for lunch, but first the thin and fit angler must inject himself with the drug Novolog, after somewhat unexplainably becoming a type-1 diabetic four years ago. A Godly man, Lee states, “I still feel blessed because diabetes is manageable. Lots of people have way worse to deal with than I do.”

1:40 p.m. – Lee runs four miles back up the river, stops to throw a Bomber crankbait, and swings another admirable keeper aboard. He thinks he spots his best buddy Shane Powell fishing just in front of him, and begins yelling hilarious jabs. One problem. It’s not Shane. It’s Chad Wiley from Louisiana. Matt apologizes. The two laugh, and Matt mutters, “man, I’m such an idiot sometimes.” 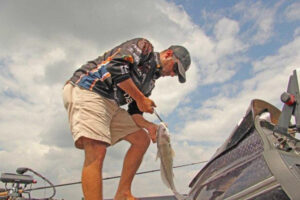 2:20 p.m. — Matt idles through a stump filled creek like an Auburn fullback at a ballet as he jams tunes from Miranda Lambert, Justin Moore and Kenny Chesney. Finally, after the long idle, one good bite, but the wrong species – a big ol’ freshwater drum. 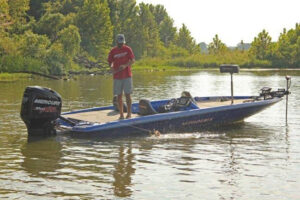 5:10 p.m. – The day on the water ends just like it began, trading smack talk with his buddy Darold Gleason, who rubs salt in the friendly wounds by catching a bass while Matt is forced to watch. 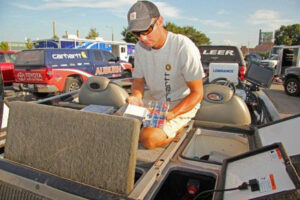 5:24 p.m. – The day on the water is done, but Matt has work to do. He began the day with a hammer in an icebox, and he ends it with wire nuts and pliers in an effort to repair a battery connection and trolling motor issue.