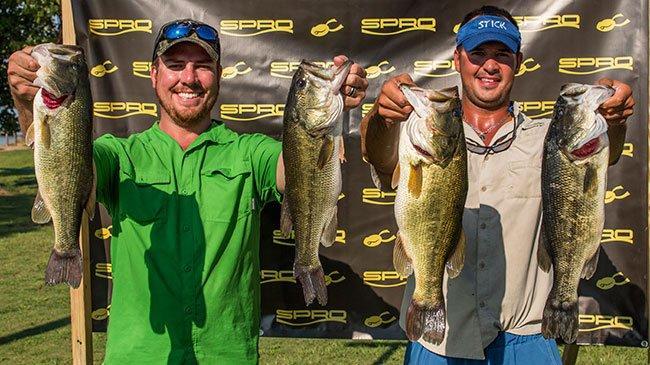 Anglers from all over the country flocked to Lake Guntersville this weekend for the 2014 SPRO Frog Open to battle for a hefty $10,000 first place prize. The rules were simple– throw any SPRO topwater frog and nothing else. With 290 boats registered, there was an undeniable buzz in the air throughout the entire event. Competitors began  piling into  the Guntersville State Park boat ramp at 3:30 in the morning with heavy-action rods, thick braided line and high-speed reels covering their front decks. There was a lot of good-natured banter going on, but make no mistake about it. These guys were prepared for battle.

With the aquatic vegetation growth still  “behind” from this year’s harsh winter weather,  Lake Guntersville didn’t kick out the giant limits that the anglers were accustomed to catching.  Despite the tough bite, however, 247 bass were caught for a grand total of over 740 pounds.

“This is one of my favorite times of the year,” said Syd Rives, National Sales Manager of SPRO Corporation. “We all enjoy having the chance to personally meet so many of our supporters while giving them a chance to fish their way to a big payday. This event is all about giving back to the angling community and this year’s total payout was $34,300. Our goal is to let  the anglers know how much we truly appreciate them.”

“It’s absolutely awesome  to talk fishing with so many SPRO fans,” Rojas said. “I’m always impressed by this tournament’s high level of professionalism and the skills displayed by the participants. I was especially encouraged this year by the number of children who showed up– whether they competed or volunteered behind the scenes. It’s such a great sign for the future of this great sport.  I can’t wait to do it all over again!”