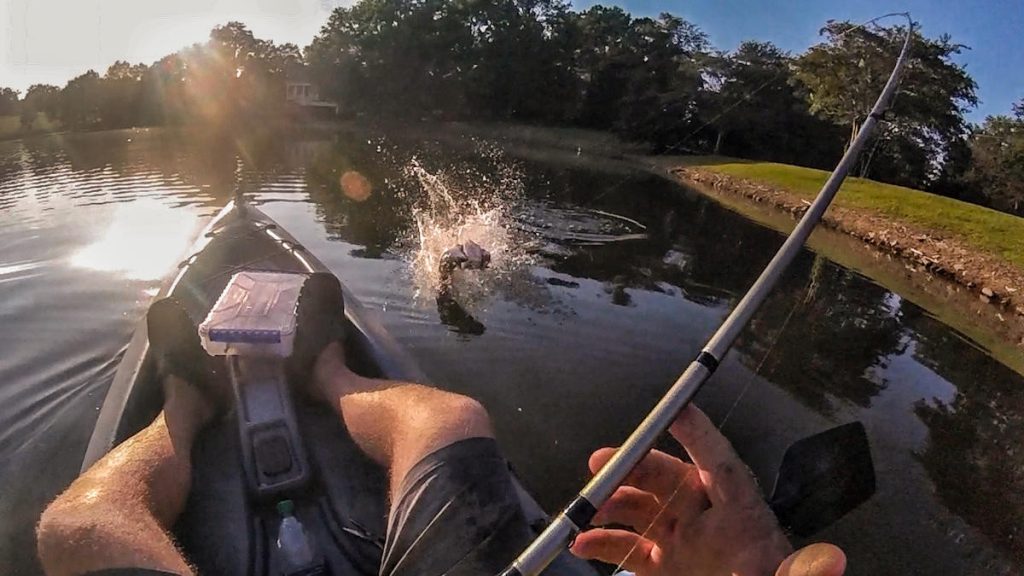 I am an avid bass fisherman who has been in a bass boat, quite literally, before I was even born. I’ve fished hundreds of tournaments and spent thousands of days feeling the rhythmic slap of water on fiberglass beneath my feet.

The recent explosion of kayak fishing certainly caught my attention, but I figured it just wasn’t for me. After years of not giving it a chance, I broke down and dove head first into it. I quickly learned I had been missing out. Here’s what I have learned during my first two months fishing from a kayak. 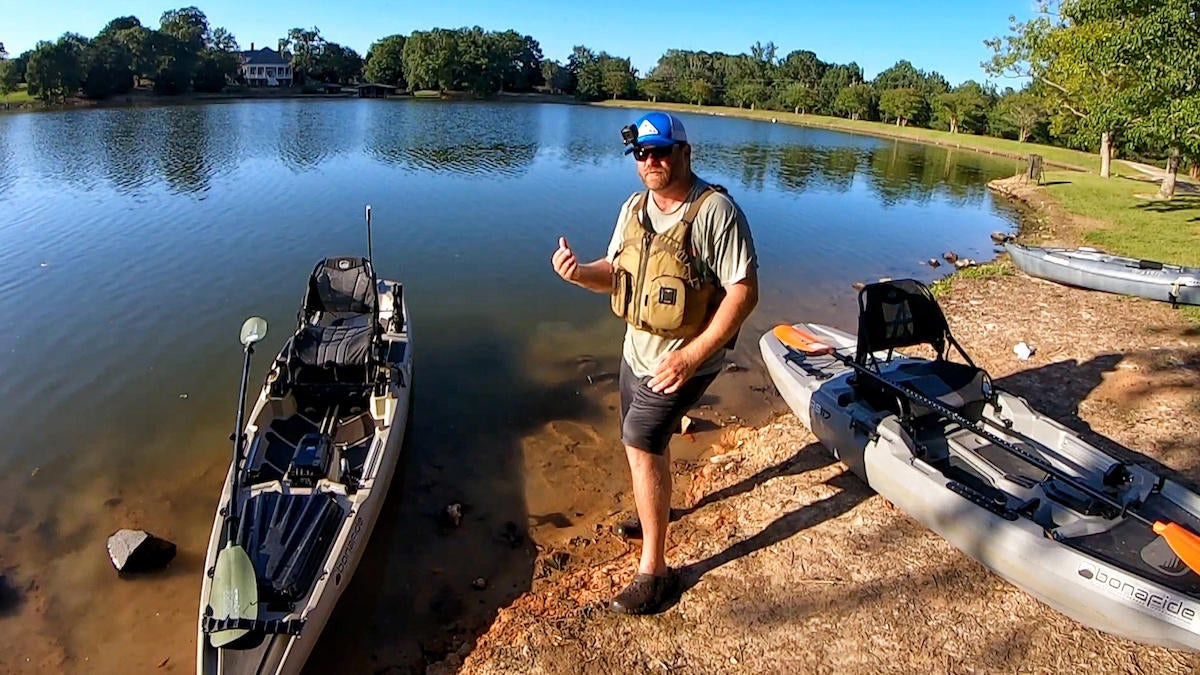 I like to run around a lot in a bass boat; limiting myself to a mile or so of fishable water in a kayak just never seemed appealing. What I didn’t realize, however, is I could actually cover quite a bit of water in a kayak. I fished a few four-hour night tournaments from a kayak this summer and for one of those tournaments, I went back and calculated the distance I had paddled. I had paddled approximately 6.7 miles.

This was with nothing more than a paddle. There are other kayaks out there, like the Topwater PDL from Old Town, that have pedal-drive system and even beyond that, there are motors designed specifically for kayaks and a myriad of rigging options for most any kayak to add a traditional trolling motor. 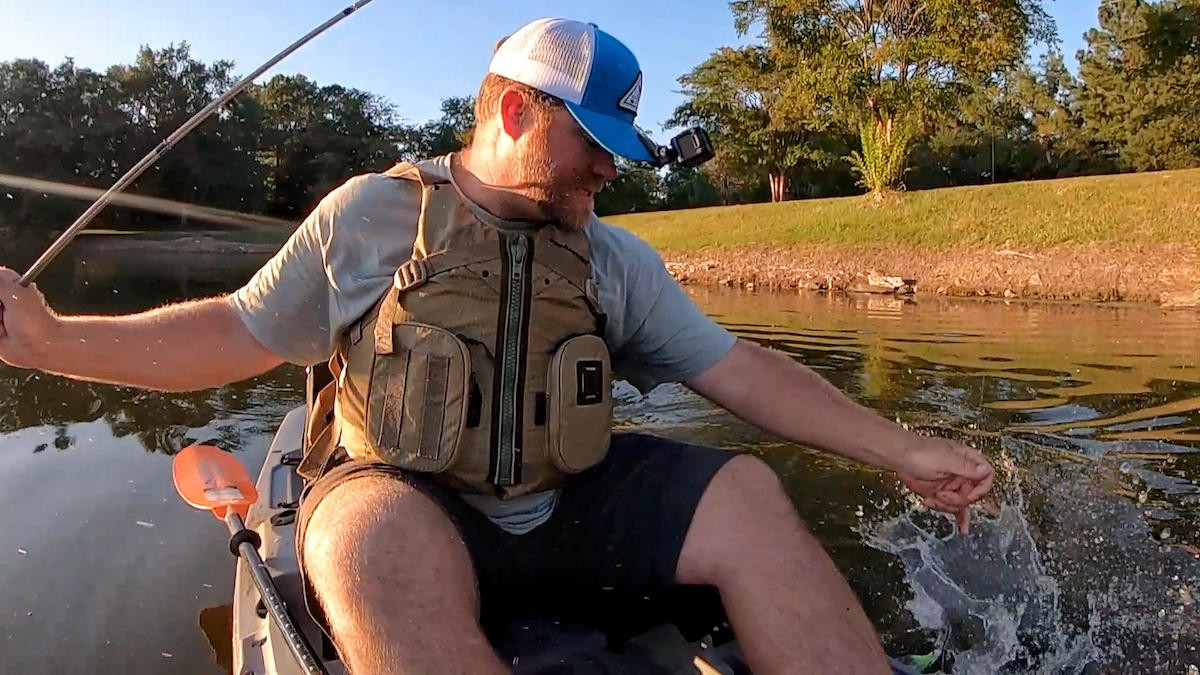 I’m a pretty big guy. Especially if you ask the CDC, who categorizes everyone who has ever had a Twinkie as obese (and I’ve had a lot of Twinkies). I’d also describe myself as sturdy more than steady. I’m not nimble. In high school I weighed 185 and they put me at left tackle. I had the hands of a spoon and the footwork of a boxer who was down for the count.

So stability in a kayak was a big concern of mine. I doubted I’d be able to sit in one without flipping and I knew I’d never be able to stand.

Now I must say, this is absolutely a fact for some kayaks. Some of the lower-end kayaks just won’t allow you to stand. I found that out after making my first $300 kayak purchase from a big-box store. But then again, you can only expect so much from a $300 kayak.

However, after borrowing a top-of-the-line kayak from a buddy, I can tell you with absolute certainty that there are kayaks out there that can support an ogre like myself. Yes, I have actually been called ‘Shaye the Shrek’. But that’s beside the point.

I wouldn’t want to paddle 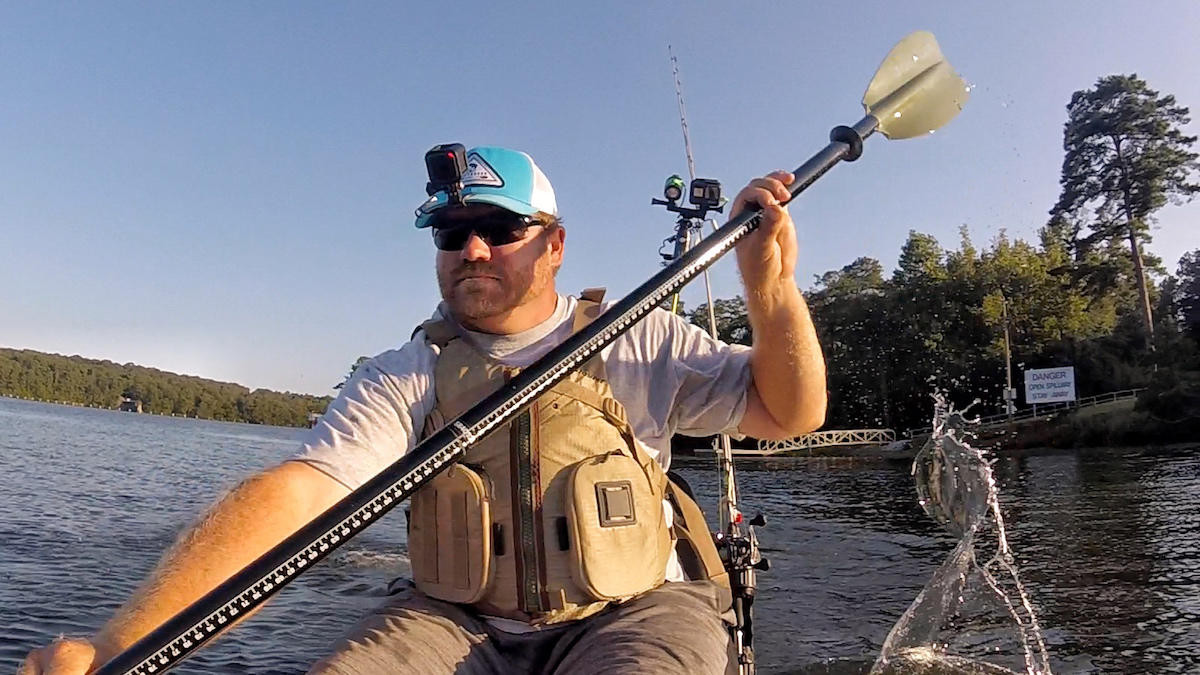 This was probably the longest standing barrier between myself and kayak fishing. When I looked at anglers paddling around, I thought to myself, ‘Why in the world would you willingly subject yourself to that?’ And honestly, it took fishing from a kayak to understand it.

Kayak fishing is really a powerful metaphor for life; anything worth doing will come with some degree of difficulty. It’s no different from trying to qualify to fish one of the national bass tours. Once you achieve something like that, you look back and realize how hard it was. And that’s what fulfills you. If it was easy, the reward would be far less.

What I found almost immediately with kayak fishing is that the challenge is very real. I remember distinctly in the first hour I spent in a kayak, I felt I was not going to pursue fishing from one for very long. There was a very slight breeze and I was in the $300 big-box kayak, so I was spinning like a top. I’d paddle to a laydown, make a cast and be looking in the other direction while working the bait over my shoulder by the end of the cast. I was getting frustrated very quickly.

But I had the cameras rolling and was committed to making a video of my first outing in my new kayak, so I paddled on. About an hour (and admittedly a few vulgarities) in, I got a bite. A spotted bass around 2 pounds hammered my bait on the way up. It surprised me. The second surprise was only a millisecond away. I instantly realized, I’m not in a bass boat.

Where I would have typically just boat flipped the fish after a couple cranks of the handle, this 14-incher had me spinning once again. Already being at the fish’s level, I reached for it and it took off, throwing about a half-gallon of water in my lap. It was a hot day and that was a cold dowsing. After a fight that went a couple more similar rounds, I finally got my hands on the fish.

The feeling. That’s what was different. That’s what locked me into this kayak deal. Before, that fish would have spent about 2 seconds in the air as it was casually tossed behind me out the back of the boat. But that day, I found myself staring at it. Almost apologetic. Like seeing that ex for the first time in a while and suddenly knowing how good you had it and how big of an idiot you had been for taking her for granted.

That’s the result of a paddle. That’s the result of the challenge. That fish meant way more to me because I traded more for it. I invested more into it. Putting myself at a disadvantage reinvigorated my love for the sport of bass fishing. I had leveled the playing field. There were going to be times where the battle didn’t end in my favor. The stakes were higher now. For a guy who had become so focused on winning tournaments and nothing else in fishing could satisfy him, ‘fun fishing’ was fun again. A paddle did that.

I wouldn’t have enough tackle 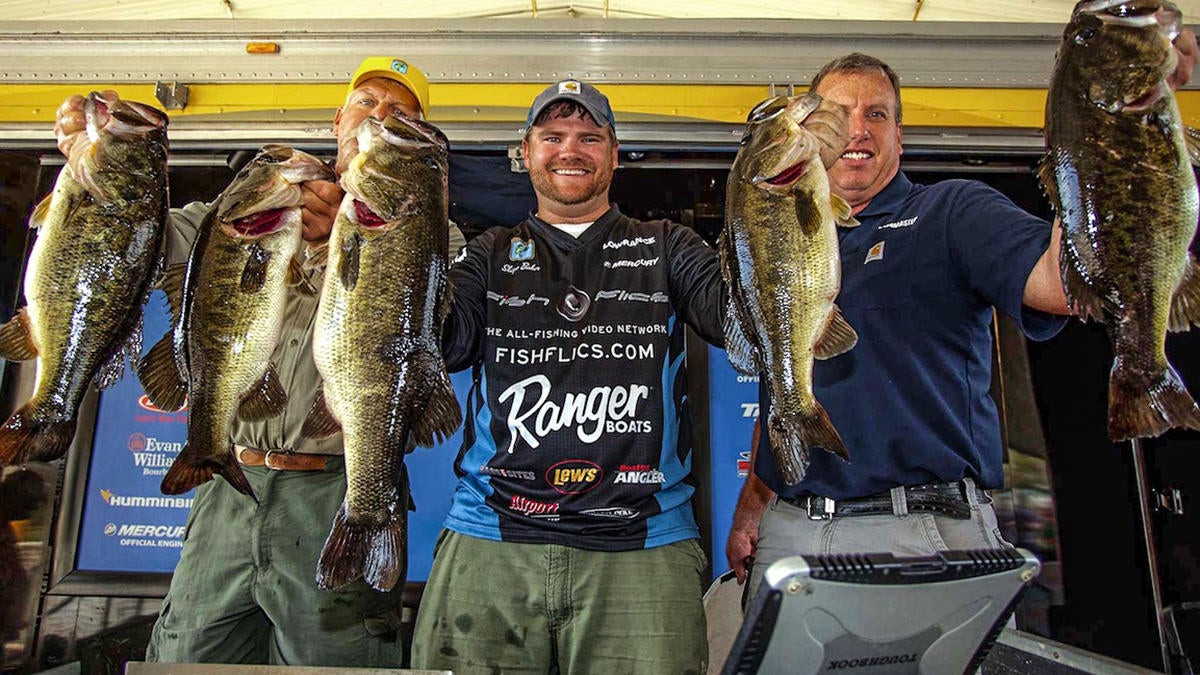 I’m a tackle junkie. I love it. It’s honestly a problem. I’d rather eat Ramen and viennas while slinging the latest and greatest bait than eat steak and stick with old-school stuff.

But honestly, the amount of tackle I have in my bass boat is more often a hindrance than an asset. I have gear stuffed in my bass boat that I haven’t laid eyes on in years. So when I finally chose to fish from a kayak, I was eager to see how limiting gear would effect my fishing.

I have been pleasantly surprised that I’ve seen no adverse effect. I usually take a couple small boxes with me in the kayak and a small bag of soft-plastics. In 15 trips or so, I haven’t once needed something and not had it. The key is preparation. Building your boxes specific to your trip and having a little bit of everything. Taking five dropshot weights is usually sufficient. There’s no need for the 14-pound box full of dropshot weights that I lug around in my bass boat.

To further emphasize my point, I won one of the small pot tournaments I fished from a kayak over the summer. I carried two small boxes. I had 3 rods with me and only used two all night. I caught 4 of my fish on a swim jig and one on a topwater popper. And when reflecting on the tournament, I realized that I would have likely used the same limited gear had I fished from a bass boat that night. In fact, two weeks later my dad and I won again from his bass boat and I did use the same two rods and baits to catch most of our fish.

I didn’t like the idea of measuring fish for tournaments 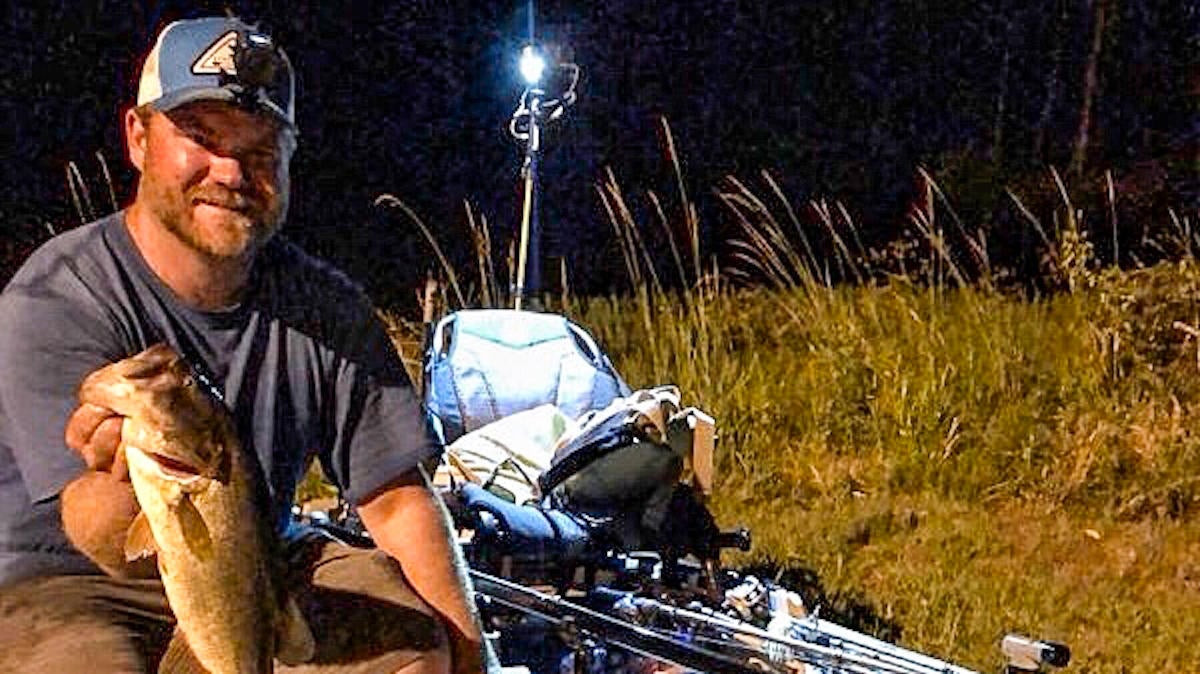 Tournaments are a big deal to me. I like to see where I stack up to the competition and I also like the opportunity to offset some of the costs of fishing with money earned by it. Though I have yet to fish a true kayak-style tournament, the idea of measuring fish to gauge my catch never really appealed to my five-heaviest bass mentality.

But a friend of mine said something to me one day that altered the way I think about using length to determine the quality of the catch. He stated that length is actually a better gauge of the quality of a fish than weight. Essentially, if you catch a fish in March that weighs 5 pounds and then catch the same fish in May when it weighs 4 pounds, the fish that’s now older and wiser weighs less. But the length is the same, if not a little greater. 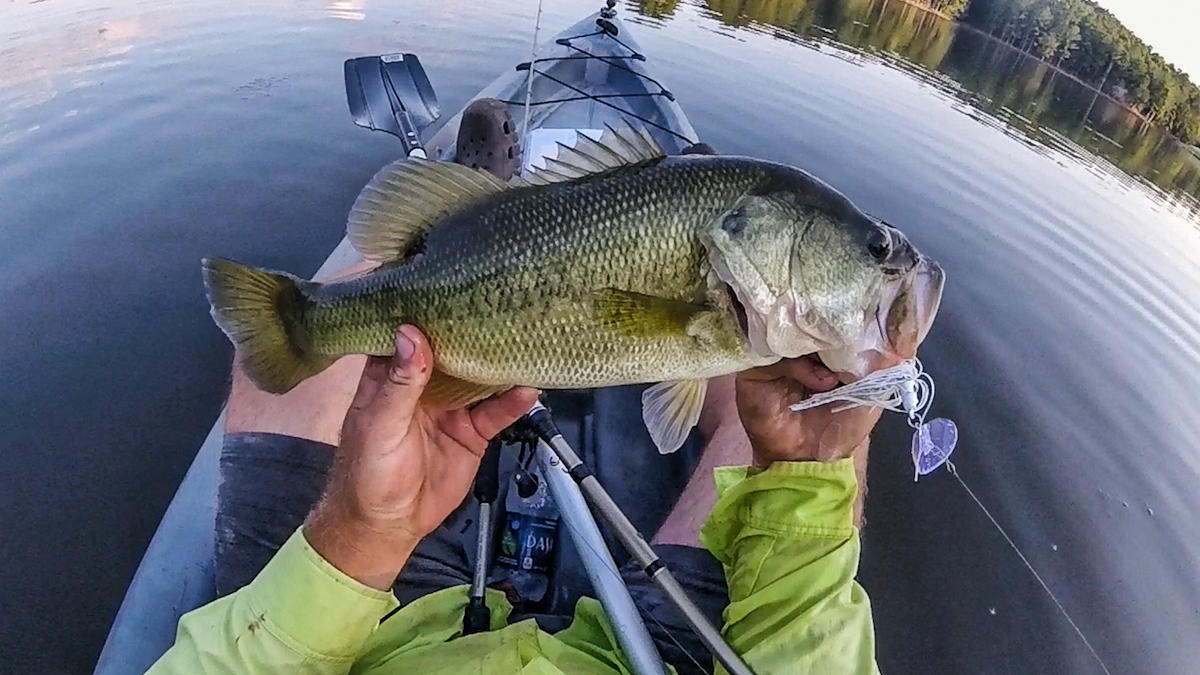 I sincerely believe fishing from a kayak will be a staple in my life now. I don’t expect it to entirely replace my big-boat fishing. I’ll still fish with my dad some and fish some tournaments from a bass boat. But kayak fishing has opened up a whole new world of possibilities to me and rekindled a fire that had grown dim in my passion for fishing. I’m glad I finally gave it a chance.