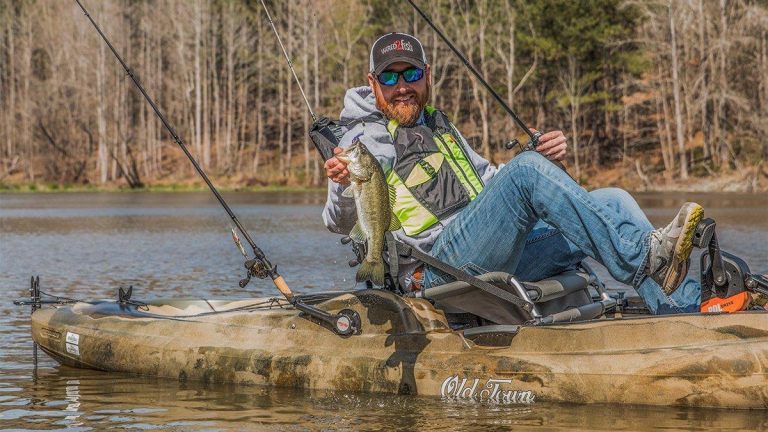 I’ve been thinking a lot lately about my progression as a bass angler; it could be a maturity thing, but I think a large part of it is the longing for a fresh perspective of this sport. No matter what hobby you might have, I believe that doing the same thing for years on end can get stale at times.

I grew up fishing from the bank each day after school and by the time I reached driving age, I saved up enough money to buy my first bass boat. It was a complete mess and I’d have to get to the ramps at 3:00am to make sure it would crank before daylight, but it was mine. It was a symbol of freedom and hard work for a young man my age.

Fast-forward 14 years and a few newer bass boats and I’ll be honest—I’ve been getting a little restless. My area is filled with rural ponds, creeks and rivers that are rarely touched by another bass angler and my 21-foot bass boat simply isn’t the right tool for the job. I’ve always heard locals’ stories of big fish from these “hidey holes” and I had no good way of accessing them.

I wanted in on the action, so I ordered my first fishing kayak. After some research, I decided to go with the Old Town Predator PDL and since it was delivered, my perspective on fishing has changed a lot. I’m beginning to revive that sense of freedom I felt when I was just 16 years old.

This isn’t a full review—I want to really put it through the wringer before that happens—but I thought it would be useful to share my first impressions of my new kayak. I had a lot of questions and concerns before taking the plunge and I wish I would have had an article like this to read and make my purchase a bit easier.

How in the world do I transport it? 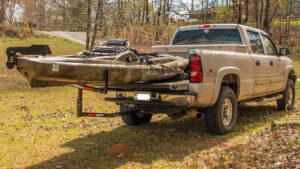 I drive a Chevrolet 2500 HD Duramax Diesel, so I figured I could just stuff my kayak in the bed and start fishing right away. What I didn’t realize, however, is how long this Predator PDL is. It measures 13 feet, 2 inches long and I quickly learned that it wasn’t going to fit into the bed of my truck.

I looked at a couple of options on the internet and wasn’t about to spend $1,000 on a trailer, so I came up with a really inexpensive and easy transportation option: A removable truck bed extender. You’ve probably seen construction trucks using them to haul large pieces of lumber to and from job sites. I found one for $60 on Amazon and my problem was immediately solved.

Loading and unloading the Predator PDL has been surprisingly easy since this purchase. Although it weighs 117 pounds, it has been fairly simple to load and unload by myself. I’ll simply pick up the front-end, slide it onto the truck bed extender and move to the back-end and push it the rest of the way. With just one ratchet strap to keep it still while driving to the lake, it’s ready to go. 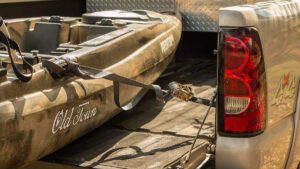 Because this is a heavy and ultra-sturdy kayak, in most places I’ll actually back my truck up right to the water’s edge and drag it a few feet into the lake. Although I haven’t used one yet, I’m thinking about buying the Old Town Skid Plate Kit. It’s designed to protect your kayak from rocks and other debris and you’re dragging it to your next fishing spot.

When you’re transporting your kayak to those super desolate fishing areas, you can also use a dolly for longer distances. I’ve been eyeing the Carlisle Kayak Cart and as I start to get a little more adventurous with my kayak fishing, I’ll definitely consider it.

This simplicity has helped me fit a lot more fishing time into my busy schedule. I can load it in my truck in about five minutes and sneak off to a small backwater slough and be fishing within 20 minutes. Even if I just have a few hours of free time, I can scratch the itch and be back home before supper’s ready.

In short, the Predator PDL is a pedal-powered kayak. There are no cumbersome paddles to get in your way or make a bunch of noise, which has helped me get into super skinny water without spooking the bass. This system is insanely quiet and easy to maneuver, so I’m able to concentrate on finding and catching bass, not messing around with boat positioning. Whenever I need to reposition a bit, I quickly turn the rudder control knob and I’m good to go.

The pedal drive unit is removable, so you’re able to store and transport the kayak a bit easier. One of my biggest concerns was figuring out how to dock or beach this kayak in shallow water due to the pedal drive system beneath the hull. Thankfully, I’ve learned that you can quickly tip it up as you approach the shallows and slide right onto the bank without tearing anything up.

Aside from the perceived stealth and maneuverability, one of the biggest reasons I chose the Predator PDL was for the added exercise. I’m no spring chicken anymore and much to my own disdain, I am showing the beginnings of the dreaded “dad bod”— it hurts me just to type that sentence. I am now a statistic.

Working on a computer all day is bad for my health and there’s no way around it. I wanted to find a way to fish and cut a few pounds in the process. The Predator PDL helps you get some exercise, but here’s what the cool thing has been for me: I don’t even realize I’m doing it. My eyes are scanning the water and looking for the next cast and I’m not even thinking about my legs moving non-stop.

I won’t lie—my legs and abs (or at least where there used to be abs) get a little sore after a long afternoon of fishing, but that’s a good thing. I don’t own a scale, but just yesterday morning I had to tighten my belt another notch. Small victories matter when you’re fighting the dad bod.

It’s a lot sturdier than I expected 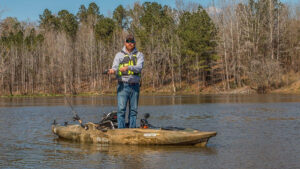 For years, my biggest reason for not kayak fishing revolved around the lack of stability. Again, I’ve owned a 21-foot bass boat for almost a decade, so I’m used to a sturdy fishing platform. I don’t often fish from old canoes or tiny john boats because I feel like I’m going to tip over anytime I set the hook. I guess I’ve just been spoiled, to be completely honest.

On just my first fishing trip from the Predator PDL, I was sincerely blown away by its stability. I was a little wobbly for the first few minutes, but after a half-hour or so, I wasn’t even thinking about it. It might sound weird to some, but I almost forgot that I was in a kayak.

Standing up took a little courage to try, but that has also been easier than expected. I don’t stand up much when I’m fishing from this kayak, but It’s a must whenever I’m fishing topwater lures or jerkbaits. If you like to use techniques that require sharp, downward twitches of your rod tip, you need a kayak that you feel comfortable standing in.

Storage hasn’t been an issue

I’m still a tournament angler and fishing guide, so trust me—I understand the urge to pack more tackle than you need. This was another concern for me before owning a kayak. I didn’t want to jam a bunch of my tackle into small grocery bags in order to make them fit in the kayak.

I’ve been pretty impressed with the storage options with this particular kayak. You can stack 3700-size tackle trays behind the seat and slide a few underneath your seat for easy access. In regards to soft-plastic storage, I can put several bags into the side gear storage pockets. Anytime I have to re-rig, everything I need is within arm’s reach. The oversized bow hatch is pretty cool, too. It’s completely watertight and you can lock it, which was a pretty big deal for me, being a first-time kayak angler. If I do happen to tip over or something crazy happens, my cell phone and wallet will stay dry and safe. 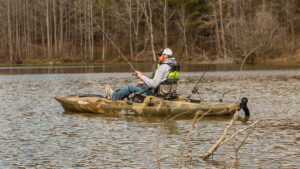 I’m going to be using this kayak throughout the entire year. I’ll still spend time in my bass boat, but this is going to be an outstanding tool for creating some great content in some lesser-known and previously inaccessible bodies of water.

If you’re looking for more small-waters content, stay tuned—I’ll be knocking stumps all year long in the Predator PDL and you’ll be along for the ride.