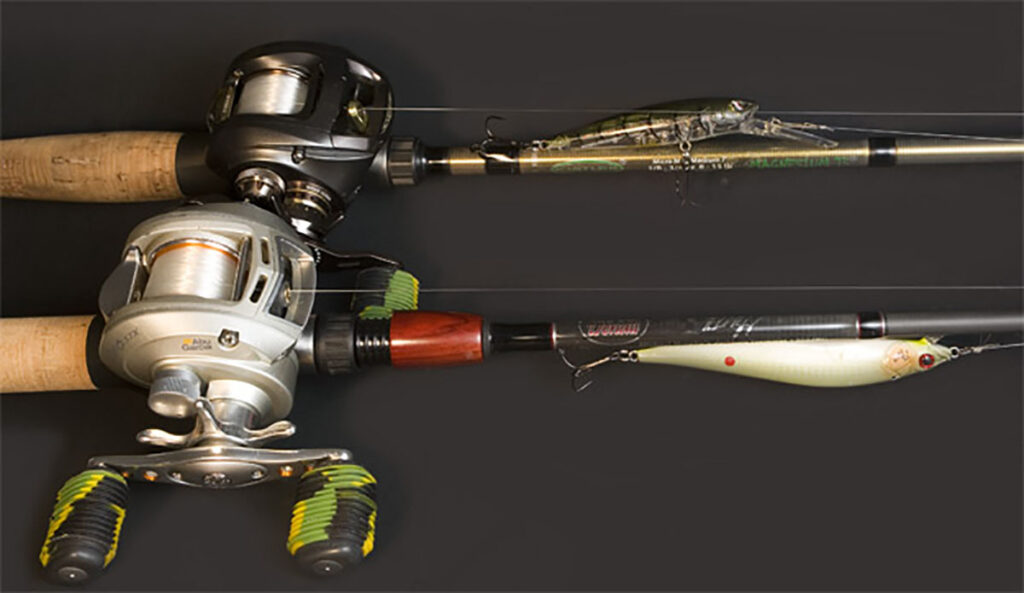 It’s a cadence echoed by many that fancy fishing a jerkbait. Or a topwater for that matter. But some folks get enamored with only going with the normal cadence when jerkbait fishing and for that matter get lost in how to fish the jerkbait more than when, where and why to fish a jerkbait. The cadence, color, action, pauses, and knowing how to tweak it all matter.

So we figured we’d offer up what we know on jerkbaits to help give folks a little more confidence. Terry Brown is an accomplished jerkbait angler. In fact, he’s won tournaments and placed second in a Redman (now BFL) tournament back in the day on Kentucky Lake with a massive 26-6 stringer of bass caught on jerkbaits. His weapons that day were Smithwick Rogues and Bomber Long A’s weighted with rubber core weights that he had to cut in half and crimp on the front hook. Kevin Wirth had 27-4 to win. But third place was 14 pounds.

While folks have fished jerkbaits for a long time, that event lead a bunch of Bassmaster pros to a winning technique in the following tournament on Kentucky Lake. That was before jerkbaits exploded as a mainstay technique on the lake. Terry loves to remember the old days but prefers the jerkbaits we have now. It was a lot of work back then to make a jerkbait behave right.

“The good ole days are now with jerkbait fishing,” he said. “The baits are so much better now. Back then, we had to fill up buckets of water and spend time weighting a jerkbait and testing it in that bucket to get to tilt up or down and suspend just right. I always liked my jerkbait to sit nose down or tail down, so that it looked different than all the other shad sitting there horizontal. We’d use lead tape, rubber core weights, copper coil, and more to try to get the baits to suspend just right.” 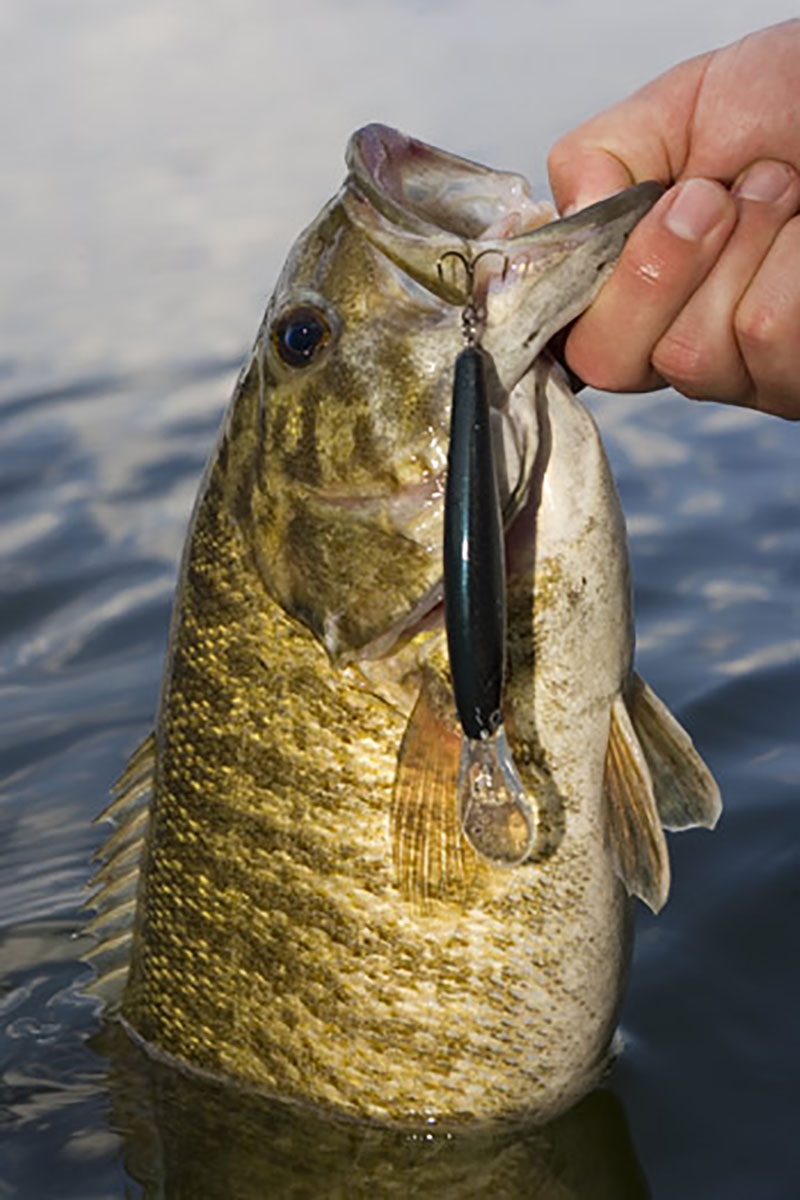 The suspending is just part of the equation. In the late winter and early spring of the year, the shad are sort of in a funk, usually stunned by cold water. Temperatures around 40 degrees or below can cause a shad kill. If you’ve ever seen shad in the wild when this is happening, they will make small bursts and then just sort of suspend or even slowly sink. For this reason, I will actually make my baits suspend perfectly or even sink very slowly this time of year.

As the water warms, the shad will group up and start to get a little more active, but a shad that flashes and twitches and sits in the water nose down and looks a little different will get picked off easy by watching bass.

That brings us to the point of water clarity. A jerkbait is a visual bait. If the bass can’t see the bait, generally you’re not going to catch as many as you would in cleaner water. So you want to seek out the cleanest water you can. Many times that will be towards the north end of a lake or a near the dam on an impoundment.

Early in the year, the bass are going to begin staging on main lake points. Then they will move to staging areas inside of bays or near big flats where they intend to spawn. So you want to focus on fishing intersecting staging areas like points inside of a bay, corners of main lake pockets, channel swings (areas where a river channel comes in and runs close to a bank and then turns away from that bank).

Now fishing a jerkbait can seem like a painful process because of the attention to detail. We’re fairly meticulous though in our approach. We’ll start out with our boat positioned in deep water and cast up on a point. We’ll start with a subtle jerk or two quick jerks in a row, then let the bait sit with slack line. The rod is usually angled with the tip pointed at the water. Then we’ll turn the handle and gather all the slack while moving the rod tip back towards the lure. We jerk it back down toward the boat so the tip is pointed back towards the water again. Usually we’ll only jerk it a foot or two. Some days though they may want a hard sideways jerk and pause. Experimenting on every cast is key until you figure out which one. 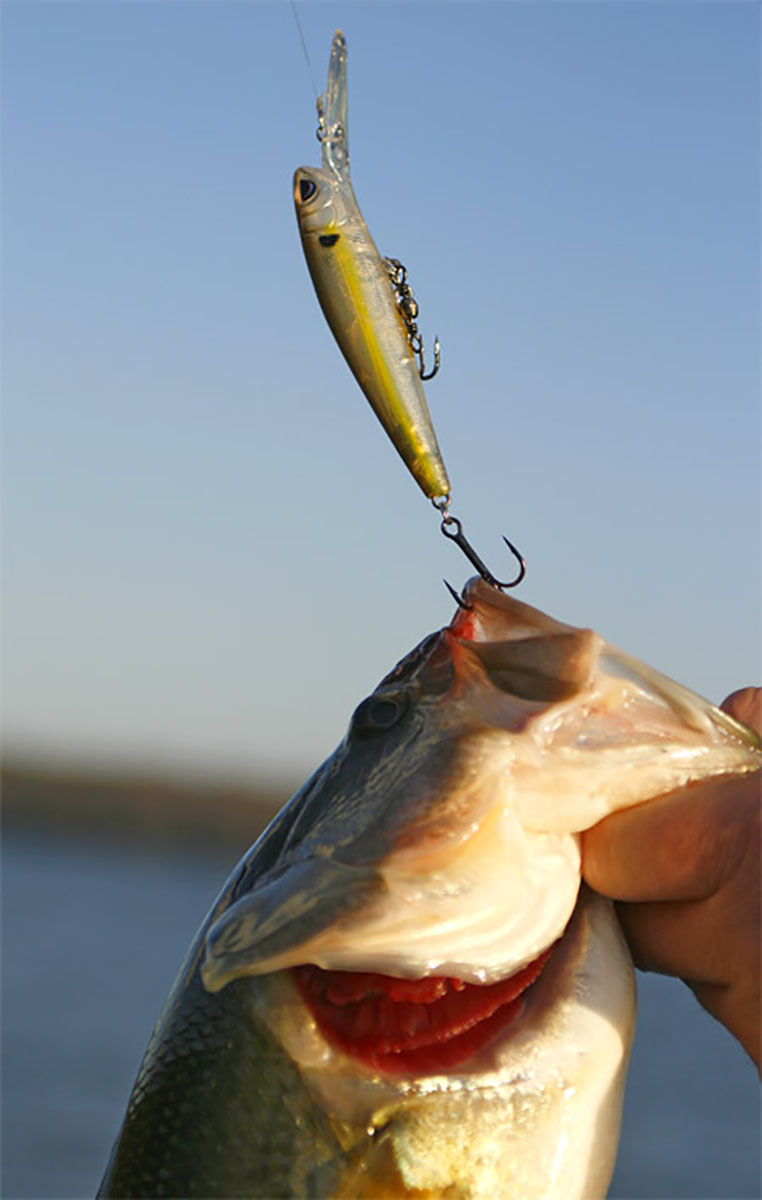 We like to use monofilament because the line will lay on the surface where we can watch it much like a strike indicator when fly-fishing with nymphs. If we see the line twitch or pull taught while the bait is sitting still, we know a fish just bit.

How long you pause really depends on the temperature of the water and mood of the fish. The general rule is, the colder the water the less you jerk and the more you pause. When the water is real cold. I might let the jerkbait sit 10-20 seconds between pauses. As it warms say 50 degrees or warmer, I like a couple quick jerks together and then pause 5-8 seconds. As it gets up in the 60s, You can jerk-pause-jerk-jerk-pause continuously, only pausing for 1-3 seconds.

Jerkbait fishing is very demanding. You have to be mentally tough, and I find it’s easier if I think about a bass watching a shad while I fish a jerkbait. I imagine on every single cast there is a big bass sitting off the edge of this point, suspending, looking back at the point for an easy shad that is stunned in the cold water. I jerk it and then let it sit there. I think that bass is inching closer, debating whether its real and whether he should eat it or not. Then as I jerk it again, he’ll make a grab at it and take it.

The pause is what lures them in. Sometimes they bite while it’s just sitting there motionless suspending or just barely rising. You don’t usually want a jerkbait to sink unless there is a shad kill and the shad are struggling and sinking. But many bites come when you go to jerk the bait after a long pause. Because they’ve been staring at it debating, and all the sudden, it moves. They have to bite it before it leaves.

Some folks have more jerk than pause, and therein lies their problem. In my opinion, they should be called “pausebaits”. So concentrate more on your pauses than your jerks.

Next thing is to pay close attention to every jerkbait you tie on. Put it in the water and give it a good jerk. Does the bait float right back up to the top quickly? Does it sink out of sight quickly? You want it to basically sit there. If it’s rising too fast, try a bigger front hook, add a split ring to the front hook; add suspend dots, strips, or other small weights. If it’s sinking, the bait may be taking on water or the hooks are a little big. Try a smaller back hook and see if it will rise or sit still.

Once your bait is looking right in the water. Experiment with the cadences. A cadence is a sequence of jerks and pauses. Jerk-jerk-pause is one popular cadence. A cadence helps you stay focused on fishing the jerkbait, pausing and watching your line. Fishing a jerkbait is more of a process than a lot of other lures. That’s because the pauses are so critical, and you’re truly causing the fish to react to what you’re doing.

Sometimes the cadence is nothing more than a slow pull and stop. I’ve had some incredible days on Beaver Lake with a slow pull and pause with a jerkbait. Terry has too on his lakes. The subtle wobble draws them in. Most jerkbaits have rattles and that slow pull can emit a sound that the fish react to.

There are deep jerkbaits and shallow jerkbaits. The deeper jerkbaits obviously will work for deeper bass, but again visibility is key. These baits are often more effective on sunny days. Jerkbaits are also usually more effective when there is some wind and light to break up the image of the jerkbait. Because a bass can sit and look at it so long, you like for something to break up the pattern of the bait to the fish.

Mike McClelland is an accomplished jerkbait angler, having designed the Spro McStick and Spro McRip jerkbaits. He favors sunny windy days for both of his signature jerkbaits. That’s not to say you can’t catch them really good on overcast days, but a good breakup of light while fishing jerkbaits is usually more effective.

Let’s talk about some starter jerkbaits. There are a lot of really good jerkbaits on the market. Some of the most popular would be the Smithwick Rogue, Lucky Craft Pointers and Staysees, Rapala X-Rap, Spro McStick and Megabass Ito Vision 110. The latter has really become popular in the pro ranks as a go to jerkbait.

Many baits like the Spro, Megabass and Lucky Craft have weight-transfer systems to help throw the baits a little better. Jerkbaits have a tendency to helicopter on a cast in the wind. A lot of folks, us included, will throw the jerkbaits on 8-pound monofilament on spinning gear so that we can cast them further in the wind and they will dive deeper with less line resistance in the water.

Our normal setup though is a 6-foot, 6-inch baitcasting rod with a medium action or a good backbone with flex in the tip to help with casting and working the bait. A baitcaster with high speed ratio is often best to take up slack quickly on a bite. We like 8- to 10-pound monofilament. Remember fluorocarbon sinks and can pull a bait down.

Jerkbaits are like crankbaits. Don’t just buy one and think you’re going to set the world on fire. You need a variety. Deep and shallow. We stick with natural colors usually although I have seen where a purple back with chartreuse sides has caught the fire out of them as well as a popular color called Clown. But day in and day out, I like a Chartreuse Shad colored jerkbait. But you’ll find that different rattles, different depths and different colors can be the deciding factor on different fisheries and especially when the bite is tough.

Pick a color you have confidence in on your fishery. Remember the bass needs to get a good look at it so water clarity is key. If it’s muddy, pick another bait. Focus on your pauses. Be more subtle and pause longer in real cold water. Move it faster and jerk it harder in warmer water. Keep slack in the pause and watch your line always. Be expecting a bite after a long pause. Paying attention is the key to success with a jerkbait.