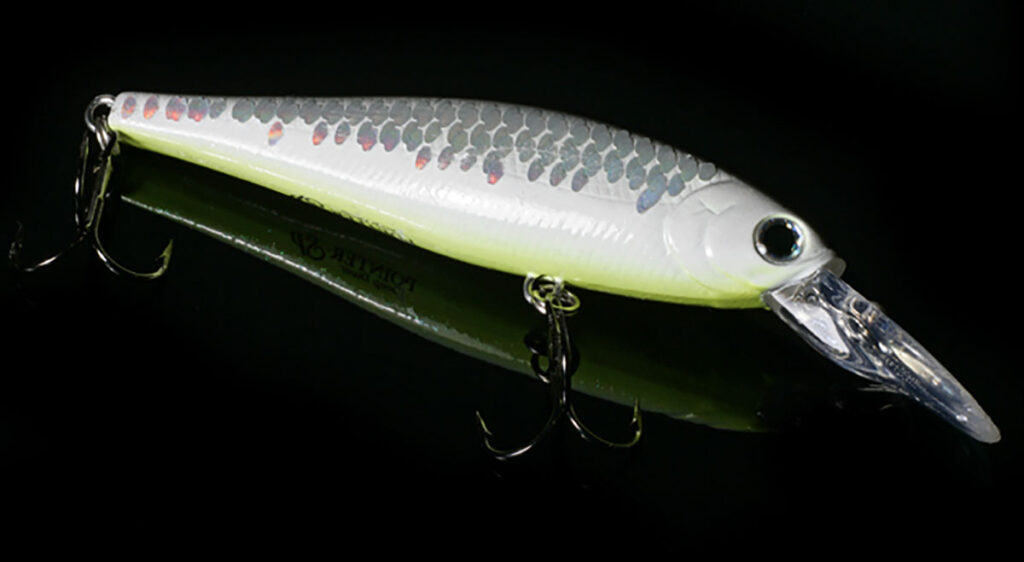 When you think of big sticks you might think about baseball players like Albert Pujols or Hank Aaron, but as anglers, we look at big sticks as big stick-, jerk-, rip- and slash baits. Depending on the part of the country and manufacturer, the terms are interchangeable with minnow imitators used in cold weather conditions. In the Midwest, we call them jerkbaits. Across the South Central and Southern regions, they are many times called stickbaits. Out West they like to call them rip baits, and in the North, they are termed slash baits. No matter what term serves the technique best, this bait is a great cold water offering and catches suspended and staging fish as good as any bait on the market.

The designs of the big sticks have been enhanced in recent years and their ability to suspend and be cast better has been enhanced as well. What started with baits like the Bomber Long A, the Smithwick Rattlin’ Rogue and the Rapala Original Minnow now has brethren like the X-Rap XR-12 Rapala Slashbait, the Lucky Craft Pointer, the Spro McStick, the Jackall Squad Minnow, the Megabass Ito Vision 110 and numerous other works of art that not only look fantastic but can be cast long distances because of weight distribution systems and neutral buoyant baits that brought science to the look.

Those that have been around long enough to see the progression of better quality jerkbaits would admit the new baits are significantly better than the predecessors of years gone by. They not only look better, but the actions they provide are also superior to most of their early brothers.

The sizes of these baits and the depths they will reach vary, and depending on the conditions, each have their place. For my money, I really like the larger sizes early in the year. Baits that can measure 5 to 8 inches are the choice when this technique starts producing. We have caught some of our biggest bass in water temperatures from the upper 30s to the low 50s when many times the air temps were a balmy 45 degrees or less.

The bigger baits tend to have a bit more subtle cutting action, and when they suspend, big fish look at them as an easy meal. The larger baits slide a little more on the retrieve versus a quick darting action of the smaller baits. Big fish like bigger baits in the spring. That runs counter to thoughts that smaller may be better this time of year. The technique dictates a very slow jerk-jerk-pause, with the pause at times lasting longer than most anglers can stand. Jerk the bait to depth, let it sit, another quick jerk and let it sit. Most fish will load up on the bait during the pause and keeping the rod tip near the water’s surface and using a sweep hookset is usually best. Let the fish dictate the cadence.

This past year, we had clearer water conditions early, and we were able to fish the “jerkbait” more. In prior years, where rainy conditions limited visibility and the success of this bait, it got thrown less. Conditions are best with clear water, and we believe that bass are more sight oriented feeders this time of year. Rattles in these baits can draw fish to them, but a long pause tells us they like it “quiet” too. We have tested both rattling and non-rattling models, and you should let the bass tell you what they want. Some days they will crush a rattling bait, and other days we catch more on the “silent” killers. Again conditions dictate what will work best.

We like a medium-heavy rod with a softer tip and have used a crankbait rod at times with this technique. We generally prefer a 7-foot rod for this application, and a slower reel, 5.4:1 gear ratio, is our choice.

Warming spring days will trigger fish to stage preparing for the spawn, and the mouths of bays and points adjacent to them are great first locations to check. Small pea gravel points on the main lake are also great places to look. Depending on the water clarity, depths of 20 feet or more can be good producers, but we have found the 12-15 range best with water temps in the mid 40s better. A couple of warm days prior to your day on the water can be like turning on a light switch. Action can be fast and furious, and fish will generally position in the same locations all over the lake.

A couple of other things we like to switch around early are feathered hooks and color. It seems there are days when baits with feathered trebles like the X-Rap will catch bass two to one as those without them. We really like shad patterns but have seen hues with reds, purples and even clown colors do very well early. We really like the purple/gold X-Rap.

Put on your Frabill Snosuit, insulated boots, beanie and gloves and get after them in the late fall and early spring. Depending where you live, one of the best times to fish a jerkbait can be “right now.” If you have open water, get out and enjoy some fishing that will heat up very quickly even now.