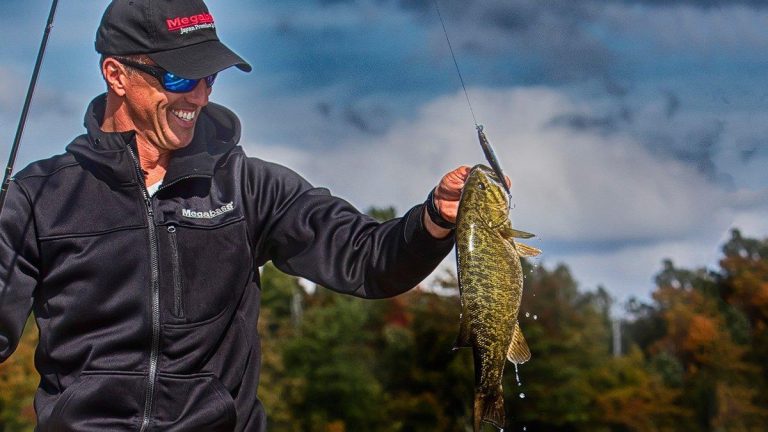 Veteran pros Edwin Evers and Randy Blaukat both believe that sound is the least-understood way to appeal to â€“ or repel â€“ an otherwise curious bass. They’ve seen it time and time again, where the difference between success and failure consists of the addition or subtraction of a rattle from their jig, or the switch from a noisy crankbait to a silent one or back again.

Very few anglers, however, consider noise profiles in choosing their jerkbaits. They assume that they’re all relatively subtle and that any variations are inconsequential. That’s a mistake, Evers said.

“For most people it never crosses their mind,” he said. “They’re crazy loud, like a lipless crankbait. Anyone who’s ever listened to one in a pool knows that.” He said that throughout his career he attributes much of his incremental success to his ability to understand the impacts that all five senses have on his prey’s willingness to strike. “I’m the guy who turns his depthfinder off when he’s fishing, the one who considers the differences in the sound that braid and fluorocarbon make sliding through the grass. It all makes a difference.” 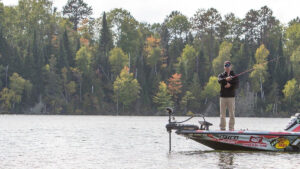 Blaukat added that even the same jerkbait can create different sounds depending on the manner or speed in which you work it. For example, a standard Megabass Vision Oneten “is noisy if you shake it end to end, but not side to side. There’s a significant difference, and you need to figure that out to adjust to the mood of the fish. These fish have keen senses â€“ they can figure out where a minnow is in pitch black darkness â€“ so to them even the hooks skimming against the bait make a difference.”

The amount of noise that he wants to generate has to be calibrated to fishing pressure, water clarity, and to some extent wind, all of which work to effect the aggressiveness of the fish on a given body of water. Over time, he’s become convinced that “we don’t catch near the number of fish that see our jerkbaits. Fish will come up and study them. They’ll come within inches and not hit them. When you get a fish in that sweet spot, at the point where they have to make a decision, there are definitely times when noise turns them off.”

That’s why the pros are so excited about the introduction of the new Oneten Silent, a lure that shares the outward appearance and the exquisite finishes of its predecessors, but without the built in sound making devices. The functional differences may not be outwardly apparent, but they are the result of concerted engineering effort by the Megabass R&D team.

“We removed the internal rattles, thereby eliminating the majority of the rattling noise,” said Kenichi Iida, Product Manager for Megabass America. “And instead of equipping the lure with a weight transfer systemâ€”which generates a very loud ‘knock’ when the lure is jerkedâ€”we have a fixed weight to keep the lure balanced while remaining highly castable.”

Blaukat has long been a fan of the Megabass Silent Riser, a similarly quiet lure, but one which was designed to float with its head up, targeting a shallower range than the renowned Vision Oneten. He’d tried to weight the Silent Riser to get it to suspend, but could never get the same action out of it as the original Oneten, and particularly when the water is clear and under 50 degrees, getting that storied action and extra bit of depth are key.

The new Vision Oneten Silent solves these issues, preserving the action, head down posture, running depth, and suspend setting of the original. Now, Blaukat will often keep both versions of the Oneten on deck to see which the fish prefer that particular hour. When there’s a strong reaction bite rattles may be a positive, but when the fish are fickle or have been heavily pressured, silence is often golden. “Also, when they’re not aggressive, I tend to reel it a lot, almost like a swimbait,” he said.

Evers knows that it’s time to go quieter when fish are “following or slapping at it and I’m not hooking them good.” He’ll also switch up on his second or third pass through an area, hoping to eke out a few extra bites that others might have missed.

Bucking the preferences of many other pros, Blaukat uses spinning gear for “98 percent” of his jerkbait presentations, turning to baitcasting gear only for super-shallow, larger than average bass in heavy cover situations. Spinning tackle allows him to use lighter line, which in turn reduces the effect of wind and current while allowing for longer casts â€“ all of which provides a crucial advantage when stealth is of the essence. His favorite rod for this technique is the Megabass Orochi XX F4-68XXS “Ronin” model, which is designed for jerkbaits and specifically tuned for the Oneten series.

While the Oneten Silent may not share the same “guts” as its noisier brothers, it is offered in many of the same highly-detailed, performance proven colors, as well as some newly-added GP finish “transparent” colors that provide a subtle approach when dealing with heavy angling pressure, clear, cold water, or fish that have just come up from deep water. “Because I’m often using it in clear water and heavily pressured situations, I’ll typically have a few natural colors out on the deck, including Mat Shad and Megabass Gizzard Shad,” Evers said. “And you can never go wrong with Elegy Bone. But I’ll also make sure to have one really loud color and I’ll go back through the area and throw that one, too, before I leave.”

None of this is meant to disparage the original Oneten, which of course is the most vaunted money-producing jerkbait in recent bass tournament history. Instead, Blaukat said, anglers need to learn to “maximize water.”

“If you roll through the area with a Oneten and catch a couple, you should be able to come back through with the Silent, and maximize the area’s potential. Each bait is just a tool, and when you’re on a hard core jerkbait bite, you have to be able to offer them numerous options. Nobody knows for sure what generates a strike. So through a process of experimentation â€“ with cadence, retrieve, depth, color and now sound â€“ we can figure out the mood of the fish. Finally, you can’t underestimate the value of confidence in all situations, and by having this extra tool in the boat, I’m much more confident that I can dial in the bite.”