Soft jerkbait fishing is a technique that, in some way, shape or form, most anglers are somewhat familiar with. While many of us can remember bombing these baits across small farm ponds as children, they actually play a huge role in many professional anglers’ strategies.

Whenever he’s searching for bass, Big Bite Baits pro Russ Lane relies heavily on a soft jerkbait. For both tournament and recreational purposes, he considers this technique one of the most effective ways to find shallow bass.

Why choose a soft jerkbait

Finding bass often means one thing for Laneâ€”speed. As he dissects fisheries in search of productive fishing areas, a soft jerkbait allows him to move quickly and eliminate water while remaining efficient.

“I prefer using a Big Bite Baits Jerk Minnow when I’m looking for fish,” Lane said. “It’s bulkier and beefier than other soft jerkbaits, which allows me to fish quickly. I can bomb long casts with it and work it quickly without it hopping out of the water and leaving the most productive strike zones.”

Although it’s equally effective for deep water applications, he quickly targets shallow areas when he’s on the hunt for bass. After a long cast, Lane works the Jerk Minnow with a “pop, pop, pop, pause” cadence to draw reaction strikes from the most aggressive bass. He warns, however, that pulling soft jerkbaits through the water column will significantly decrease their action.

“It’s important to work a soft jerkbait just as you would a hard jerkbait,” Lane said. “I make sure to pop the slack in my line to avoid pulling it. Ideally, you’re looking for a very wide, darting action and it will shoot up just below the surface and suspend for a few seconds if you give it enough slack to work its magic.”

Finding bass with soft jerkbaits is not only a very visual presentation for the bass, but also for the angler. Because the majority of his bites occur on slack line, Lane keeps his eyes fixated on his Jerk Minnow throughout the entire retrieve.

“Even when it’s cloudy outside, it’s important to keep a close eye on your soft jerkbait,” Lane said. “If I know there’s fish in an area, I’ll slow down and will feel more bites as a result, but when I’m using it as a search bait and fishing fast, it’s mostly visual. I make sure to have my Typhoon Optics on at all times so I can see everything happen.”

Some bass fishing techniques require great attention to bait details such as color, but Lane doesn’t get carried away when choosing a suitable color for his Jerk Minnow. Instead of concentrating solely on water clarity, he actually pays more attention to the sky.

“If I’m searching for bass in lowlight conditions or specifically targeting shade, I have the best results with shad imitation colors, such as Glow Silver,” Lane said. “If the sun is high and I’m covering big, sunny flats I prefer the Tilapia color with about an inch of chartreuse dye on the tail.”

Shad don’t have chartreuse tails, so what gives? For Lane, it’s all about differentiating his bait from the surrounding forage. If he notices a lot of baitfish in the area in situations such as shad spawns, he believes dye gives him an edgeâ€”instead of the bait becoming one in a thousand for a bass to choose from, the added chartreuse flash gives them something to key in on.

Russ Lane fishes soft jerkbaits a lot in the spring to get bass to show themselves.

When to burn it and when to soak it

As mentioned earlier, Lane primarily fishes a Jerk Minnow quickly in order to efficiently cover water and find the best concentrations of bass. There are times, however, such as the spawn, when he slows his roll and lets the bait soak.

“If I know bass are on bed, I still use a soft jerkbait as a search bait, but I’ll certainly slow it down,” Lane said. “When they’re bedding off of the banks on secondary cover, such as stumps, I’ll make a really long cast with a Jerk Minnow before I get close and start sight fishing. In these situations, it’s not uncommon for me to pause the bait for 5 seconds or more.”

Working a soft jerkbait quickly is most productive throughout the summer, according to Lane. In the warmer months, it’s not uncommon to see big groups of bass chasing shad in the shallowsâ€”especially when blueback herring are present. If he’s fishing a clear fishery with a lot of bluebacks, he gives the word “fast” a whole new meaning.

“It can be absolutely killer to work a Jerk Minnow as fast as you can when you’re around bluebacks,” Lane said. “I’m not talking about simply speeding your cadence, either. I’ll reel it almost as fast as I can across the top of the water and kill it just a couple of times. You’ll be surprised at some of the huge blowups you’ll get.” 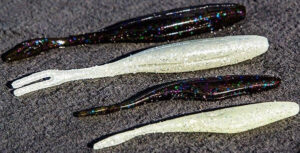 Use the right gear to increase your hookup ratio

Many of us are accustomed to rigging our soft jerkbaits weightless Texas-style and burying the hook point in the back of the bait. Lane used to do the same thing until he ran across the perfect hook for a Jerk Minnow. Since his discovery, he’s enjoyed more fish catches and isn’t changing any time soon.

“It’s almost as if the 5/0 Gamakatsu Offset Round Bend Worm Hook is tailor-made for a Jerk Minnow,” Lane said. “The correct rigging method is essentialâ€”when you stick the hook point in the nose, don’t go too far. Instead, just leave enough room so half of the hook eye is covered by the plastic. Then, push the hook through the body and don’t skin hook it. You’ll catch more fish that way.”

Lane further increases his hookup ratio by executing a proper hookset. Bass anglers have a tendency to wind down and come off of the ground with monster hooksets, but that won’t help your cause when soft jerkbait fishing. When you see a fish eat the bait, simply wind in your slack and lean into the fish when it gets heavy.

Because the Jerk Minnow is heavier than other soft jerkbaits, Lane is able to use heavier gear which gives him more control over the fish. With 16-pound Sunline Super FC Sniper Fluorocarbon and a 7-foot, medium-heavy Castaway Skeleton Casting Rod, he’s not afraid to get his bait into the crud.

“It won’t do much good if you can skip a soft jerkbait into tight spots and not have gear that’s able to pull ’em out,” Lane said. “Using the heaviest equipment you can get away with is always the safest bet.”

Throughout the summer, you can be sure that nearby bass will be chomping on soft jerkbaits. If you keep your color selection simple, learn how and when to differentiate your retrieve speed and use optimal gear, you’re going to have a hard time getting off the water. 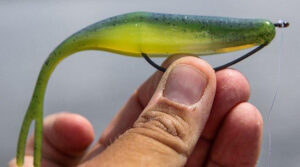