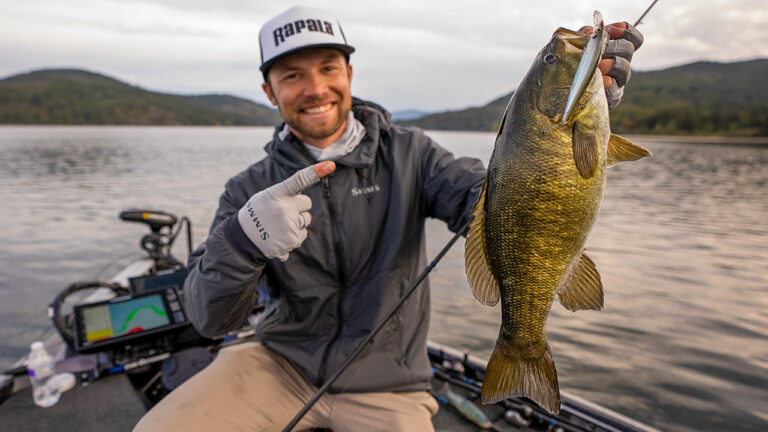 The use of jerkbaits with forward-facing sonar has proven itself a powerful combination in finding and triggering bass that we’ve been missing. Pro bass angler Brandon Palaniuk demonstrates how to use forward-facing sonar (Humminbird MEGA Live Imaging) in conjunction with 360 Imaging to locate prime structure and see fish and his lure relative to it. Once he finds fish, Palaniuk explains how to “video game” the lure based on the real-time interaction of the bass or any species for that matter.

The ability to see fish and your lure simultaneously is re-writing the rules of lure selection. “Seasonal” baits such as the jerkbait are quickly becoming year-round favorites, especially in clear water — this stems from the efficiency gained by seeing fish, casting to them, then getting bass to engage and ultimately bite the lure. The key is getting the bait in the strike zone and then figuring out the right cadence to get them to bite. Jerkbaits are the ultimate tool for free-style fishing, and real-time interaction is invaluable for this.

As an early adopter of Humminbird’s 360 Imaging, Palaniuk often gets asked if he’d choose 360 or LIVE Imaging if he could only have one. While he doesn’t offer a clear answer, he does a thorough breakdown on how to leverage each individually, then off of each other (cross-cueing sensors) to gain the most situational awareness possible. In the hands of a guy like BP, this kind of insight quickly turns into success.