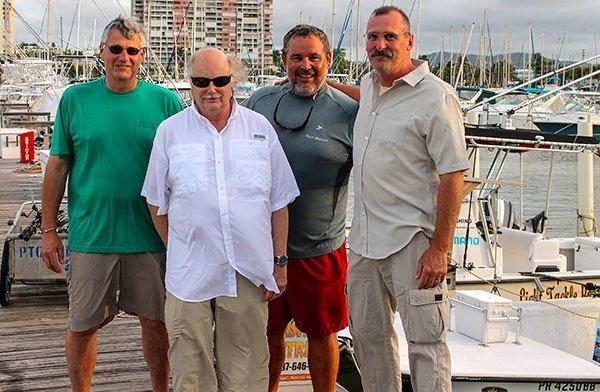 “Throw out the anchor

and tie away the lineâ€¦”

Dateline:  35,000 feet above the Atlantic Ocean

lit by the moon.

Waves, born by the very light that shines on them tonight.

If you don’t believe everything here is connected, you only need to look down on the earth, from six miles up in the sky.

We didn’t fish today, our last day in Fajardo,

but the sea never left us.

The rain that watered the coffee beans,

in the latte we drank in the Old San Juan tiny coffeehouse.

The shrimp in the salad at lunch.

The clouds our JetBlue plane flew through.

Whether you believe we came from the sea or not, you know that without it, we couldn’t stay.

We, when you look from space, are an aquatic planet, it’s just that some of us, don’t have gills.

As I look at the moon,

as I look at the sea below me,

and the lighted waves,

I know this, that most of the sea down there is the same sea, the same waves, that first formed on Earth 3.8 billion years ago,

and as I listen to the music through my earphones,

and the plane rocks me to sleep,

dream, that down there somewhere,

is the one tiny drop of the sea,

the one tiny drop of water,

that started it all.

The first drop of sea.

The drop that turned a barren rock floating in space,

“â€¦let tomorrow have its own day

for today I’ve got mineâ€¦”

it was about the fish.

it was about 50 different species.

It was about only one species,

It was about us,

Three Old Men and the Sea,

and the waves inside of us.

For me, it was about coming to grip with failure.

I’m running out of, someday.

I told myself that someday I would be this, or that, and that I would live by the sea.

Write about the sea,

and only listen to the first song of earth,

When I was a very young child, my Grandfather, Clay, a First Nations Canadian, in America we call them Native Americans, took me fishing, he fished the Niagara River in Buffalo from a pier using balled up bread, and the stubs of cigars.

The cigars seemed to work best.

One time as I sat next to him on the breakwall, I was now old enough to venture out with the river all around me, as he was putting his latest chewed cigar on the hook, he looked at me and pointed out and said, “Donnie, that’s where Tess comes from.”

Tess was my Grandmother, the lady in my life who pretty much raised me, they lady who I thought to be a mermaid.

I thought Gramps pointed to the river, as to were Tess used to live, in fact he was pointing to Canada, where they both immigrated from to the U.S.

Someday, I would live by the sea,

someday, I would write by the sea,

listen to the waves,

someday, a mermaid would come out of the sea,

and Gram would come back to me.

I went on this trip,

And by to the Sea.

“â€¦give me a fishing pole

cast it in the stream

nobody knows the trouble I’ve seenâ€¦”

“In a weird way, this trip isn’t about the fish.”

Bruce told me that on the flight TO the sea.

When we got back, I asked this of Bruce and Dr. Mac, just one question, the same to both, this:

Bruce:  “The trip was extraordinary.”

And then he pulled his car over so he could, “better hear,” but I knew it was so he could better talk.

“I got out of the trip what I was looking to get out of it, and it was much more than catching my first Tarpon.”

Bruce and I were strangers on the southbound flight,

we were northbound friends.

I never for a moment thought this trip was about finding fish, it was about, findingâ€¦peace.

Even though we were at Sea, “It was a grounding for me, it helped me focus on the important things in lifeâ€¦”

Bruce, is a very private kind of person, hard to get to know, except for one thing, I get Bruce.

I have stood next to them; have looked into each other’s eyes, with the same question.

Why is it we do what we do to each other?

How fragile we, as a species,

how fragile we, as a man,

It is life, LIFE, that is the greatest catch we humans make,

life that Bruce is tying to hang on to, every precious second, and my friend when you said “..focus on the important things in lifeâ€¦”

I knew your answer before you said,

Hang on tight my friend, every moment counts,

“â€¦so tell me something water, water what do you knowâ€¦”

He has fixed blown up soldiers.

He has fixed up me.

I asked him before we took this trip, “Is it the fish, or is it the Sea.”

About the sea:  “I have been connected to water since I was a little kid, I played in the runoff stream down at the end of our street.  Fished in a pond, then a lake, riverâ€¦”

And as he paused, I knew he was connecting with the sea once again, “The Sea, it’s got this magic about it, there’s no other place on earth like it, it is a big mysterious place, where we are not in charge, love being on the water.”

The pictures behind our eyes.

For Dr. Mac, “It was the double Tarpon hookup, it was that beach you said looked like Jurassic Park and thought a T-Rex was going to walk out of, it was the time we went out fishing at night and I was casting into the sunsetâ€¦those are pictures I have behind my eyes that I will never forget.”

The pictures behind our eyes.

Pictures of peace, instead of destruction.

Pictures of love, not hate.

Pictures of good, not bad.

This trip, not about the fish, but about replacing the pictures behind our eyes,

of how mean, we

of how fragile, we,

Pictures behind our eyes, brought to us,

by the sea that is Mother,

that turned a brown rock in space,

And who sings to us, through Tarpons,

and cradles, our shores.

Who cooled the molten rock,

and took the dirt and dust,

and made it a home,

Three Old Men and the Sea,

was about the trip we all needed,

to take us back home.

“There is nothing I know that doesn’t lie within you.”