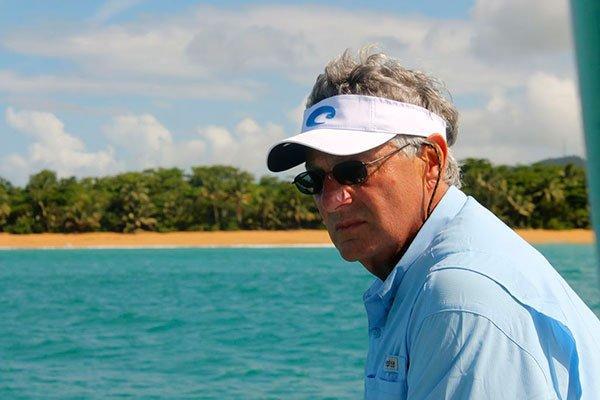 It is the largest kingdom,

It is the most dominant thing,

It covers the tallest mountains on this planet and fills the deepest valleys.

It is almost TWO THIRDS of the planet.

In it lives 1 million different species, estimates are that another 9 million species, are still hidden within.

It is the blue, which colors this rock in space.

It is Mother Nature’s, mother.

And her name is,

dripping off my face.

I have some sort of fake acupuncture sea sickness prevention band wrapped around my wrist, my right hand has a death grip on my $1,000 camera and lens, my left hand is popping Dramamine into my mouth like M&Ms.

I need windshield wipers for my Costa sunglasses.

The last wave moved my stomach from my throat,

My brand new boat shoes, have given up.  The knee brace I have on because I have STRESS FRACTURES in my knees, is turning the color of SALT, the SPF 1 million waterproof sun stuff I put on is pooling at my feet,

the two other Old Men of the Sea,

are eating a ham and cheese cubano,

Yesterday, they took the 26-foot center console thing out in 6-foot swells, meâ€”I had the massive good fortune that day of having FOOD POISONING.

Did I mention yet, that I might be hiding a general, sort of unease, about, you knowâ€¦ boats.

I love boats, I have all my life wanted to own a nice semi-big boat that I could use to write in, if you have one you are not using, call me, and don’t worry too much about it being sea-worthyâ€¦dudes I only need it to be float-worthy, or better yet, tied-up-permanently-to-the-dock-worthy.

But boats that are actually used as, you know, boatsâ€¦ not so much, for me.

and in the back of the boat one of the other Old Men, Dr. Mac I think just shouted out the “s” wordâ€¦

The entire premise of the adventure I’m on, the entire thing is built on doing a series of stories based on Dr. Mac’s quest to catch more than the 50 different species that he caught on his last fishing trip to the warm part of the Atlantic Ocean.

Listen to Mac, “I’ve timed this to the most optimal lunar cycles, the various temperatures of the water columns, the bait fish, everything so that we can be on as many different species of fish as possible.”

Now while you were listening to Mac there, I went back into my notes and dug out the list of species he said we would “â€¦ be on.”

I read it a couple of times, most of the fish on it I’ve never heard of.

â€¦and that is definitely NOT a species on his damn list.

Oh, and BTW, the brown blob in the ocean looks about the same size as the white dot of the boat on the ocean. 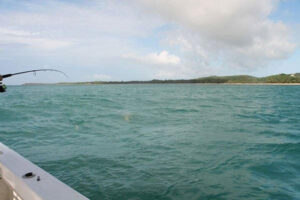 …if you look close at this picture, just a little to the right of where the line enters the water, the tarpon is hooked to it, but just to its right, look careful and you’ll see a big brownish blob…that my friends was the first arrival of the shark…and if I was in the water I would be jumping too.

Here’s what’s going onâ€¦ both Mac and Bruce have a double hook-up of Tarpon, Mac’s rod gets bent in half first, you can see the large silver fish fighting up pretty close to the surface of the water, but then suddenly the Tarpon goes crazy, and if you look just a couple of yards past the silver, you see why the fish is franticâ€¦a huge brown blob has just appeared from the deep.

And then it suddenly dawns on me, Mac is not about to give up the fish to the shark, which for the record, WAS MY VOTE, no, what Mac is doing is actually bringing the fish TO THE BOAT.

We in fact have just opened up for the shark, an ocean fast food drive-thru lane, and I’m sitting in it.

And you know, the 2 other old men on the sea, don’t actually have to out swim the Shark.

For it to turn into a really bad day.

And just as I’m about to suggest cutting the line, splat, both Tarpons are in the boat, and most everyone on board, is smiling.

Captain Marcos: “The tarpon, he’s a perfect fish, he’s an ancient guy, been around since the days of dinosaurs, but he’s up to date now. The tarpon can feed on every kind of animal in the sea, from those that live in the very deep water, to the most shallow. Tarpon, is a true master of the seas.” 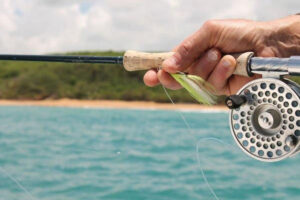 This whole trip started because Bruce called Mac up early one morning and asked him if he wanted to go fly fishing for trout in Pennsylvania.

I haven’t researched it fully, but most fly fishing for trout in Pennsylvania trips very rarely entail people shouting “shark”, but I could tell from the smile on Bruce’s face, he just caught a prize rainbow trout in the sea, “Out fly fishing in streams you dream of hooking up a rainbow trout,” which to me seemed to be the benchmark fish catch for Bruce.

But then came the “perfect fish”, and to Bruce, “â€¦when I hooked it I was set and prepared to see the fish come out of the water here,” he is pointing to the right side of the boat, “â€¦but it broke 60 yards over there.”

We both look left.

“I was surprised on how fast it got over there.”

Both of the double hookup tarpons, and all the other tarpons caught, were let go to lead a longer life of being, “the perfect fish.”

Even if there are billions of fish in the sea, I don’t want the blood of any one of them to be on me. I’m not interested in any “master of the seas” who can live as long as 50 some years die on the end of a hook near me.

Yesterday, because of the revenge of whoever Montezuma is, I was stuck onshore, which in 6-foot swells, is just fine with me.  Because of the weather though, and the increased time it took to get around out there Dr. Mac and Bruce only managed to hook up 4 different species of fish:  lane snapper, blue runner, horse eye jack and jack crevalle (who for a day I thought was the dude they called for pizza).

Today, they would double that amountâ€¦ 9 different species.

Dr. Mac:  “It was like every location we were on presented itself with the opportunity to catch 4 or 5 different speciesâ€¦ and we were using all different kind of bait.”

When the dude at Livingston Lures heard I was going on this adventure, the B.A.S.S. sponsor handed me a saltwater bait to take alongâ€¦ and it wasn’t long before Dr. Mac hooked up with first a cero mackerel, and then in the same spot just minutes later on the same baitâ€¦ a lane snapper. 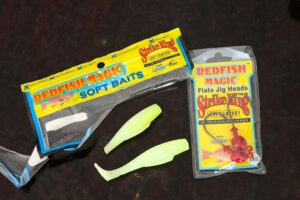 Notice how bit up the actual yellow lure thing is as compared to how it started out.

My buddy Mark over at Strike King also sent along some Redfish Magic yellow soft bait thing and flat jig heads and the tarpon just slammed it, Bruce also had great luck with some of the flies he tied himself, which I thought was a pretty cool thingâ€¦ the dude matched a hatch he had never seen before.

For most of the day I sat up front on a cooler type thing as the 2 other Old Men fished the sea all around me. 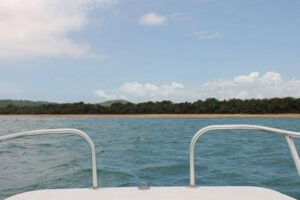 My view of a real life Jurassic Park, “Mac, any moment now I expect a T-Rex to come walking out of there and stand on the beach.”

At one point we were in an area pretty close to shoreâ€¦ from my seat I could see the white sandy beach, and what looked like Jurassic Park vegetation, I told Dr. Mac that “any moment now a T-Rex is going to walk out of it right there.” It was a sight I will remember for a long time.

Bruce was always looking up and scanning the ocean, “for birds. Birds are the eyes of the sea, follow birds and you’ll find the fish.”

Dr. Mack:  “It was a good example of the best laid plans of mice and menâ€¦ Mother Nature wonâ€¦ the weather, who could plan that it would rain for all four days, that changed the whole dynamic of the seas.” 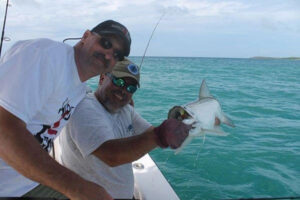 And then he added, “But we had a spectacularly great time. You know why we fish for 8 hours, because we can’t fish for more, it costs too muchâ€¦ but we wanna.”

“â€¦keep your eyes on the goal, then the prize you won’t failâ€¦”

It is, the largest kingdom on Earth,

and we knocked on its door with a tiny boat.

It is almost older than dirt, dirt was king of the planet,

One-quarter of everything alive on this planet,

The United Nations Environmental Programme recently completed a scientific study, part of the results, that 91 percent of all the species that live within the kingdom, haven’t even been discovered yet.

It is Mother Nature’s, Mother.

To be honest, Montezuma’s Revenge, and the fact that this was, from the start, supposed to be a buddy trip, between buddies, Dr. Mac and Bruce.

I was never in the mix, until basically last-second planning.

So on the final day of the Three Old Men and the Sea, I stepped back and just let 2 old men, 2 buddies, take to the water for their original buddy trip.

In the end, I was on the ocean a day and a half.

At that was just fine with me, it was as it should be, it was how the ride that is the universe planned it to be.

As you know, music is a very important part of my life, when I’m out on the road covering events I have gone as long as 6 weeks without ever turning on a TV set, unless my wife Barb was with me, I never even loaded the TV into the RV.

But music always plays. I sleep with earphones in my ears, I never write a story without headphones on and music playing.

So when Captain Marcos told me about the various goings on with all the different species that Dr. Mac and Bruce caught, I listened some, heard “Wa Wa Wa Waâ€¦” a lot.

Until he said exactly this, “I love to hear the SONG of the Tarpon.”

Captain Marcos:  “They are not actually singing, what it is they get food lodged in their throats and they jump out of the water shaking their head violently back and forth, and it makes a noise, that noise is the Tarpon song.”

“Whenever I hear the song of the tarpon, to me, I take it as, how you say in Englishâ€¦ the drums of battleâ€¦ to me as the captain of this boat, the tarpon they are challenging me with their battle drums, with the song they sing to me.” 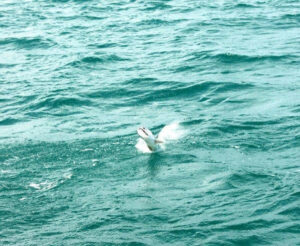 And I nod, yes, but to me Captain Marcos, the song of the tarpon means a whole other thing,

it means the ride,

to sing to me.

Gave me the opportunity to listen to the music,

And when I thought about that, I just sat on Captain Marco’s boat, and listened,

to the all the sounds around me,

and knew, it was what the ride wanted me to hear,

when I listened to,

the song of the sea.

Deep within my soul.

Coming soon:  The final chapter in The Three Old Men and the Sea | Part 5:  The Pictures Behind Our Eyes