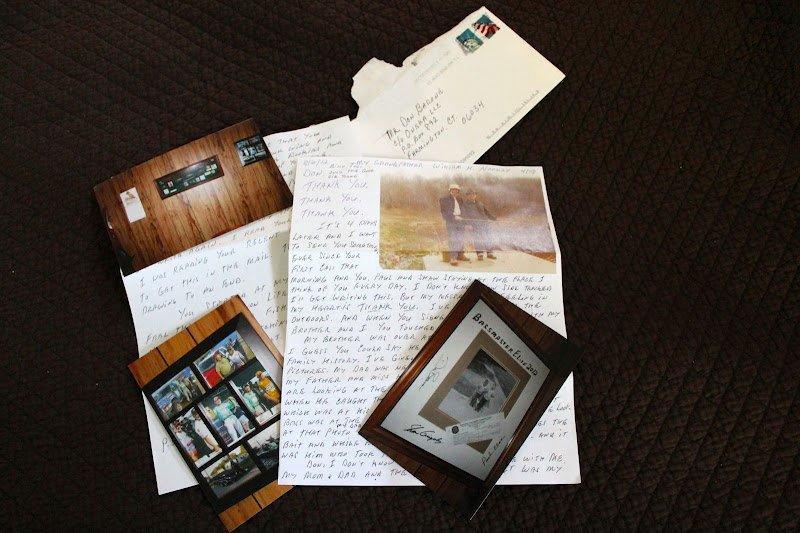 At the foot of Niagara Street, he was the only one fishing with a peanut butter & jelly sandwich.

And he was the only one catching fish.

He told me, “… Donnie, Perch love peanut butter & jelly, then he looked silently around as he was about to tell me the Holy Grail secret of fishing and didn’t want anyone else fishing over the steel rail to hear, “… Donnie (whispered) Donnie ¦but you’ve got to use Grape Jelly ¦don’t matter none the peanut butter but it has to be Grape Jelly.

Then Grampa would take a bite of his sandwich, crust and all which amazed me because I never ate the crust part, then from just off to the side of his bit he would pick off a piece, roll it up between his finger, stick it on his hook, and gently lower the magic bait into the Niagara River.

I remember he would hand me his cigar as he readied to set the hook, I would hold it away from me so as to not sneak a cigar smoke, being all of 5 years old and “… not quite old enough to have smokes yet.

I would watch the smoke curl up to the clear blue Buffalo sky, if the wind turned I would sneak the smoke, and the smell would be one of tobacco at the front end, and grape jelly at the wet end.

In the 54 years since, no matter how expensive the cigar, no matter what the occasion, whenever I have smoked a cigar, mixed with the taste of the tobacco leaves ¦was always the taste of grape jelly.

Grampa Robbins, Clayton Robbins born in Canada in 1885, left in 1900 on a train to Chicago ¦by himself.  Rode in the back, back with the other hobos.

Was a cigar smoking, beer drinking, sometime brawler, steel working, iron riveting man.  Scared hands, scared face, bull of a man to most, but to me, the gentlest man I have ever known.

It was Grampa who brought me to water, and it was also Grampa who broke the news to me that my Grandmother, Tess, was not a mermaid, as I was convinced she was.

Tess would come with us sometimes as we feed peanut butter & jelly to the perch, and as we stood on the breakwall in the Niagara River she would point to the river and tell me, “… that’s my home Donnie, that’s where I came from.

Being 5 years old, I thought she was pointing to the water, hence the mermaid heritage.  It was my Grampa who when I asked if he “… caught Gram in the river here too, in a cloud of quickly expelled smoke told me she didn’t come from the river, “… but Canada ¦over there ¦the land you see over there ¦not from in the river.

Tess, the lady who basically raised me, to me was always magical, and I remember the last time I saw her alive, she wasn’t doing very well in the hospital, and I had to catch a flight back to work in California.  Before I left I bent over her hospital bed and kissed her cheek, and quietly told her so the lady in the next bed wouldn’t hear, “… I’ll miss you ¦mermaid.

It was the last time I saw her smile.

June 15th, 1957, my 5th birthday.  Tess told me years later that Grampa told my mother that, “… since it is the kid’s birthday I’m going to take him out for his first shot and beer, then picked me up, loaded me into the rusted black Dodge and told Tess as he backed out of the gravel driveway, “… won’t be long at the gin-mill.

Tess saw the fishing pole in the backseat, knew where we were really heading.  Had in fact just made his bait and wrapped it in wax paper.

I think of Grampa a lot, but never more so than when I’m at the Farmington, CT Post Office and standing in front of PO Box 892.

It is the PO box of the LLC company I started to freelance through.  Whenever I am paid to write about fishing, the check is not made out to me, but to the LLC.

Our accountant suggested it for some kind of IRS legal mumbo-jumbo.

As I turn the PO box key I think of Grampa, for this reason, it has long been rumored, long been family lore, that Gampa was First Nations Canadian.

Here, on this side of the Niagara River we refer to the heritage as, Native American.

I have found some proof that the claim that Grampa was First Nations is true with his linkage going back to the Ontario, Canada Mohawk peoples.

In the Mohawk language the word, Water, was spoken as, “… Ohne:ka.

I see Grampa every day at the Post Office when I get the mail for the LLC I write under.

That LLC is called Oneka (for Grampa) the man who first took me to the water.

And it was in that PO Box that I found a single letter, a handwritten letter addressed to: Don Barone, c/o Oneka LLC, PO Box 892, Farmington, CT, 06034.

Or a card of any kind.

But it took two First Class stamps to get to me, felt a little heavy and thick.

Normally when I pick up the mail I just toss it onto the passenger seat of the 4Runner, and go on to my other errands don’t open the stuff until I get home.

But a two stamp handwritten letter gets opened in the post office parking lot.

The young man it turns out is a guy named, John.

The older man, is his Grandfather, William.

Alone in the 4Runner, I smell cigar smoke tinged with grape jelly.

Back in the beginning of the year on the Elite tour, my roommates, Paul Elias & Shaw Grigsby and I rented a house in Florida for one of the first events.

It was the owner of that house that sent me the letter.

The letter was handwritten on two pages, front and back, and also contained in the envelope were some photographs.  Photos of a framed picture now hanging on the wall of the house we rented.

The photo is of two young boys holding fishing poles ¦and the fish they caught.  The photo is matted, and the mat is signed by Paul, Shaw, and myself.

In John’s handwriting he says, “… When you signed that picture with my brother and I you touched the soul of a family.

I will let John, set the scene:

“… My dad helped my brother reel that Bass in, it was our dad who got us those poles, the bait, and while he was working we were fishing, and it was him who took the picture.

“… My future wife Noreen her birthday is April 20th.  She was in school that Friday and my dad gave me $20, he would always give me something when I was going to see Noreen.  When I left my mom took dad to the hospital.  I visited him the next day and told him that I loved him as I left to go back to school.  He died April 21.

“… The picture of me and my Grandfather is the only time I ever fished with him, it was during a break in my father’s funeral.  That blue jacket that I’m wearing was my dad’s.  It’s a McGregor jacket, the zipper is broken and I still wear it today on occasion.

Thirty four years later, “… on occasion John wears the jacket of the man who first took him fishing.

Later, when his grandfather died he was told he could take anything he wanted from his estate, “… the only thing I wanted was his tackle box, and he still has it.

John talks about how, “… precious our time is on earth, and pretty much ends the letter with this:

“… Don, it was always my dream to get the place that those who know how to fish would want to come ¦you started at my place and I feel that I have won life’s lotto. I may not have caught a fish but I’ve shared in someone else catching that fish, and I’m so at peace with that.

And then a PS: “… The key will always be under the mat for you.

As it will be for you, John, once I find, Last Camp.

“…and folded in this scrap of paper …”

I sat in the 4Runner, stunned.

I don’t believe in coincidence, have read all about random theory but not sure I buy in to it.

I do believe that we live in a spiritual universe full of mystery and magic, be that God, or particle physics, I believe strongly we are all made of the same star stuff.

At our core, we are the universe.

This letter came to me on the day I was about to write The Search For Last Camp: Western New York ¦the verdict.  The follow up to the first story I did about Last Camp.

It was a printed letter, small precise printing, neither my father, nor my Grandpa ever wrote the words out ¦all their letters I have are printed ¦just like this one.

It was a letter about a son who’s father did not fish, but bought him the stuff to fish with, and a Grandfather who fished with a grandson.

To tell you the truth, I was about to ELIMINATE WNY as the setting for Last Camp.  After spending 2 weeks there looking around both Lake Erie and Lake Ontario I didn’t think it would be the best place ¦the more I talked to athletes and pro anglers they more I heard that the big lakes, inland oceans actually, while teaming with fish would also be tough to fish.
More for big boats in the big pond (downrigging) trolling for fish off the back of the boat ¦nothing wrong with that way ¦but the guys I talked to want to hold the rod, cast the line, feel the bite.

The big lakes didn’t interest them.

But as I read the letter from John, I knew I was getting a message ¦a message about cigars and peanut butter & jelly.

And the Niagara River.

In the Lower Niagara River.

A river in WNY that you can basically fish year round.

A river in a canyon downstream from Niagara Falls at one end, Lake Ontario at the other end.

The river, of my mermaid.

The Search For, Last Camp ¦continues ¦the Lower Niagara River is topping the list right now ¦but I want to hear of where your Last Camp would be, and maybe I can visit your dream as well.

You can email me your spot for Last Camp at don.barone@gmail.com .

you can send me a letter like John did.

And for Grampa, here’s a message back.

When Last Camp is found.

When Last Camp is built.

The name on the Last Camp gate will read,

In honor of the man who first brought me to ”the water.

And where there will always be ”grape jelly.