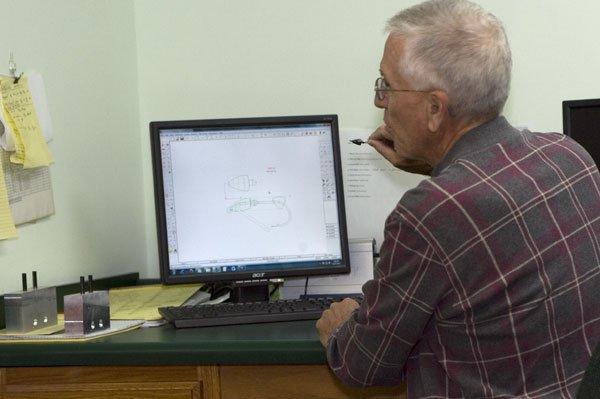 The pistons fired quickly and the table rotated as she grabbed two more pieces of metal and held them into place. KAPISH! A rapid fire of air again and the table began rotating once more. In a matter of minutes, hot molten lead was transformed into shiny instruments of affection. Lead jigs aren’t diamonds to most folks. Unless you’re like us. Looking at a stack of shiny silver jigheads with razor sharp hooks coming out of them was a thing of beauty.

We were visiting Jewel Bait Company and KG Enterprise who pours their leadheads in Northern Arkansas. KG not only pours Jewel’s baits, but they are makers of 18-20 top brands’ jigheads, spinnerbaits, and other lures. The unassuming building looks like any other machine shop from the outside, but inside was something totally different. A very quaint setting with simple offices in the front. Desks armed with CAD drawing computers and loosely dressed with jigheads, drawings and orders for new product on the worksurfaces. As you entered the shop floor, it was something else. From a distance it didn’t seem like much, mostly because we weren’t exactly sure what we saw.

There were individual stations set up throughout the floor, and the sounds of compressed air being shot filled the room with ambient noise. Each station was a buzz with whirling tables and busy hands. At a quick glance there was a lot going on at each station and we were anxious to see how it all fit together.

We started in the offices with Ken Kramer. Ken is the K in KG Enterprise and his partner Gayle Julian is the G, as well as the owner of Jewel Bait Company. The two have been designing lures for many years, and Kramer is fluent in CAD drawings.

Each jig for Jewel begins in CAD so that it can be made perfectly symmetrical, balanced and weighted exactly right. Each drawing has many intricate levels that enable them to recess line ties, incorporate unique angles and most importantly streamline their pouring processes to meet customer demand. 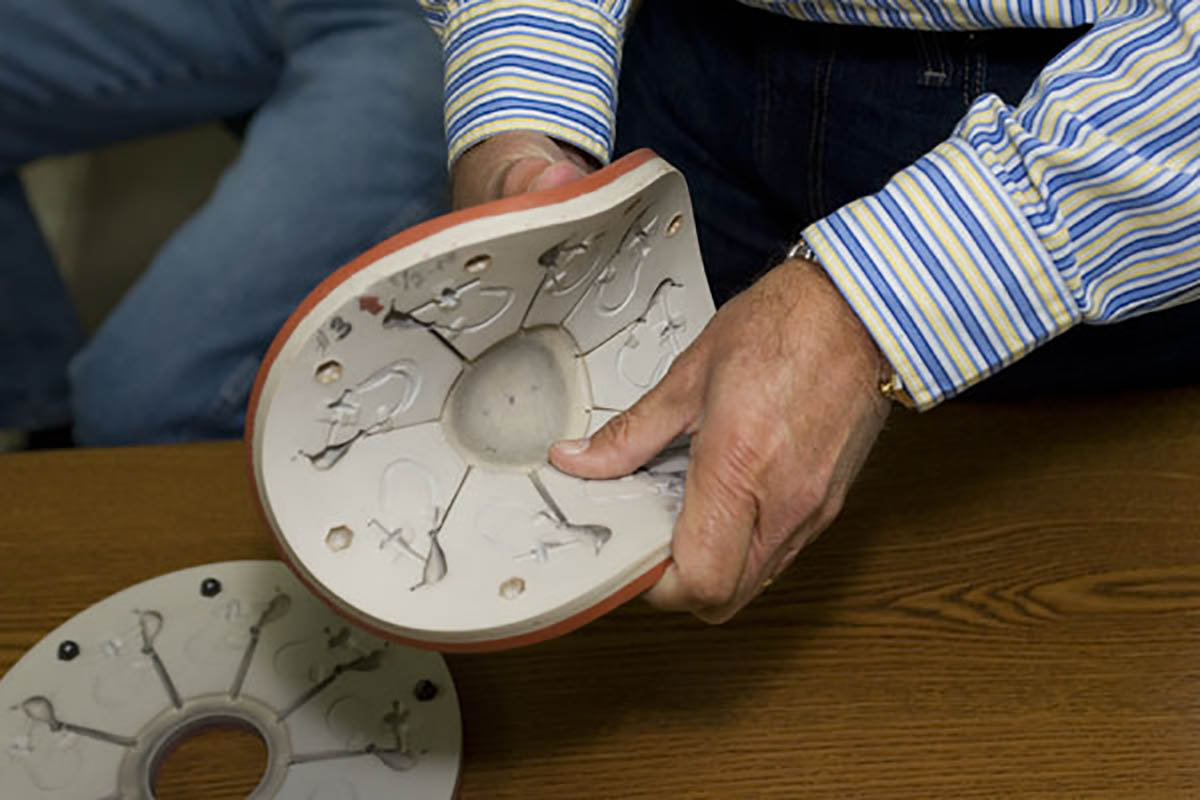 “Then we can decide where we place the cut out in the mold so that there is no additional sprue, the excess lead on a jig from pouring. If we pour it flush, we can use a mechanical slicer so that all the worker has to do is take the jig out of the mold and it’s done. No polishing or cutting sprue. We polish all the molds to begin with so every pour is perfect.”

From there, the drawing is fed to their CNC machine. If you’re not familiar with CNC just know that it’s an extremely expensive tool, but it can cut incredibly intricate molds out of aluminum. All of the molds KG Enterprise uses for Jewel jigs are aluminum so they can maintain maximum efficiency and precision. The CNC machine feeds coordinates from the CAD program and it employs a water-cooled cutter to make the intricate precision cuts it needs.

Many other companies use silicon molds and spin cast their lead. The silicone molds can flex and sway under stress and the result can often be sprue in eyelets, hooks rotated left and right on a head, or rocked forward or back on an axis. So you end up with several jigs in the same packaging being slightly different from each other.

“Do you see how this flexes,” Julian said, as he picked up the mold and bent it in his hand. “You can’t get a consistent pour with that much flex in something spinning rapidly and having hot lead pressed against it.” 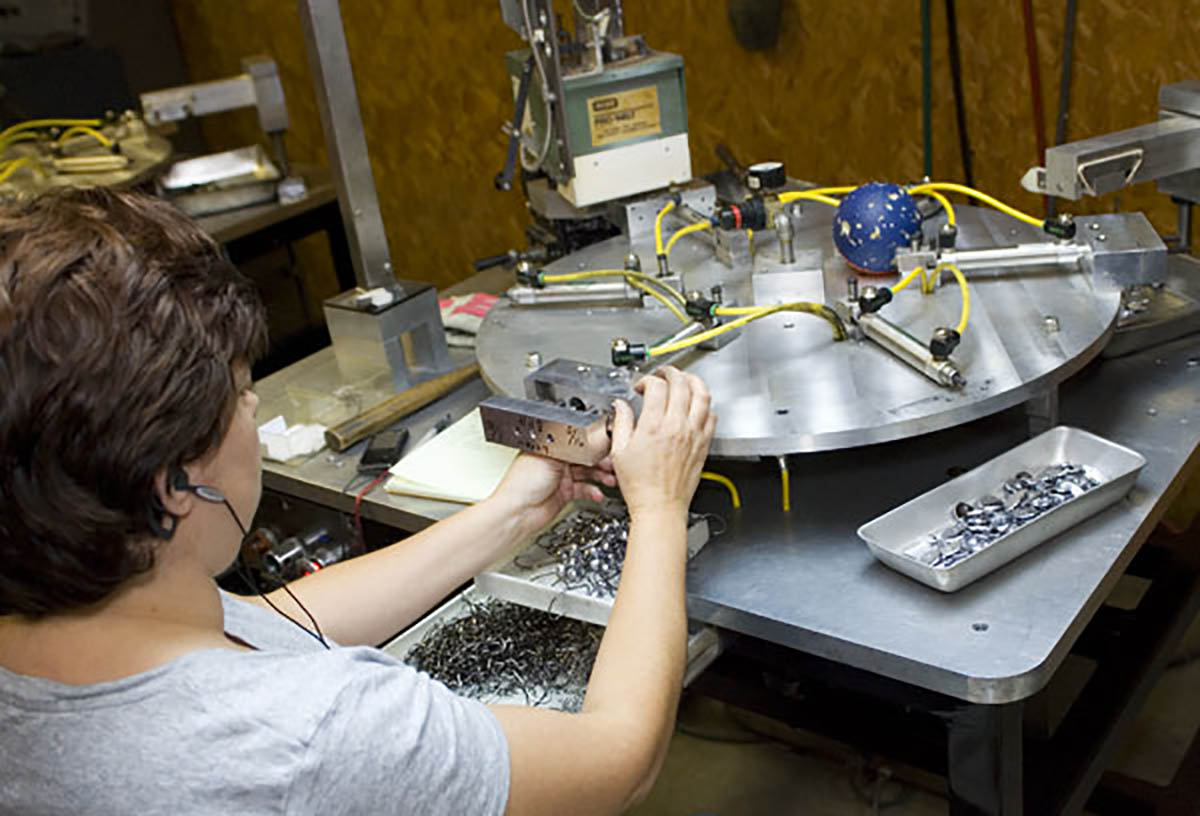 With the aluminum mold and custom made pouring process, Jewel is assured they have a precision perfect head, lure or tool every time.

KG and Jewel formulate their own lead, something Julian and Kramer adopted early to ensure they get the exact right shapes, hardness and consistency in every single lure. Not only does it make every jig perfect, but it also makes the process easier for the workers because of more consistent pours and less hassle with inconsistent lead.

At each station there is a large block of lead dangling. These blocks are poured in the back room and drilled so that they can be hung on a hook. The lead slowly lowers into a pot as it melts, keeping the stations productive for long periods without having to switch or even touch the lead. It keeps the lead heated and melts easy so every lure is poured consistently.

A custom round table top separates the worker from the pot. On one end the worker is putting a hook and usually a pin or clip into a mold. The press a button with their foot and the mold closes and the table spins the mold under the lead pot and pours the right amount of led into the mold. As that happens the mold that was just under the pot spins to the worker and they quickly remove the lure from the mold and replace with a hook. Then the process repeats. Sometimes as much as 2,000 spinnerbaits at a single station in a single day.

At their peak, KG was pouring more than 5 million baits a year. But they were very simple crappie jigs, and less complicated jigheads. Now that products like Jewel’s Squirrel Head and Swim-It swim jig are much more complicated, they pour about 2 to 3 million products a year, an amazing feat for no more stations than they had making jigs. It is a maximum efficiencies of scale shop for sure. 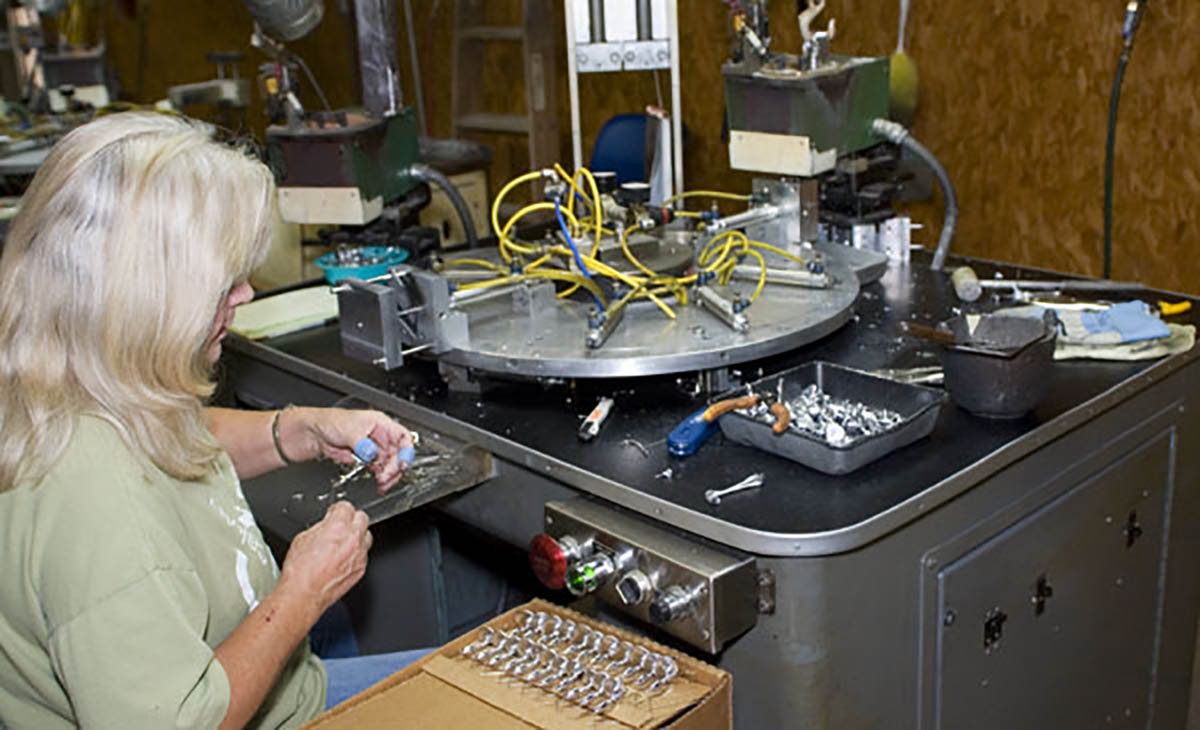 What struck us the whole time is that the drawings are complicated, the materials are all high end quality components, and no expense was spared to make the lures to the best of anyone’s ability. When you buy a Jewel jig, you’re getting a precision instrument to tempt bass or crappie or whatever you’re after. They are absolutely enamored with quality, and the whole thing is made in the USA, right there in Arkansas. The wire guards, clips, spinnerbait wire, etc. Everything is formulated locally.

Behind the pouring factory was another shop where all the painting occurs. Because the way Jewel paints its products is proprietary, we were not able to shoot photos in there. What we can tell you is they again maximized efficiencies and formulated processes from scratch to give them the ability to create some of the most incredibly durable finishes on the market.

“The paint jobs on these jigs are why I started throwing them,” said Elite Series pro Mike McClelland. “I’ve dragged some of their jigs for miles on rock hard bottoms and the paint still wasn’t scraped off. I’m always amazed how long their finish lasts.”

It was simply amazing to see how much thought and expense went into pouring lead heads at this shop. Jewel baits are all about precision and being exactly the same out of the package. They literally created the finesse jig market and are very proud to be the originators of several designs that are knocked off by many companies but at the same time disappointed with how much copying goes on in the bait business. 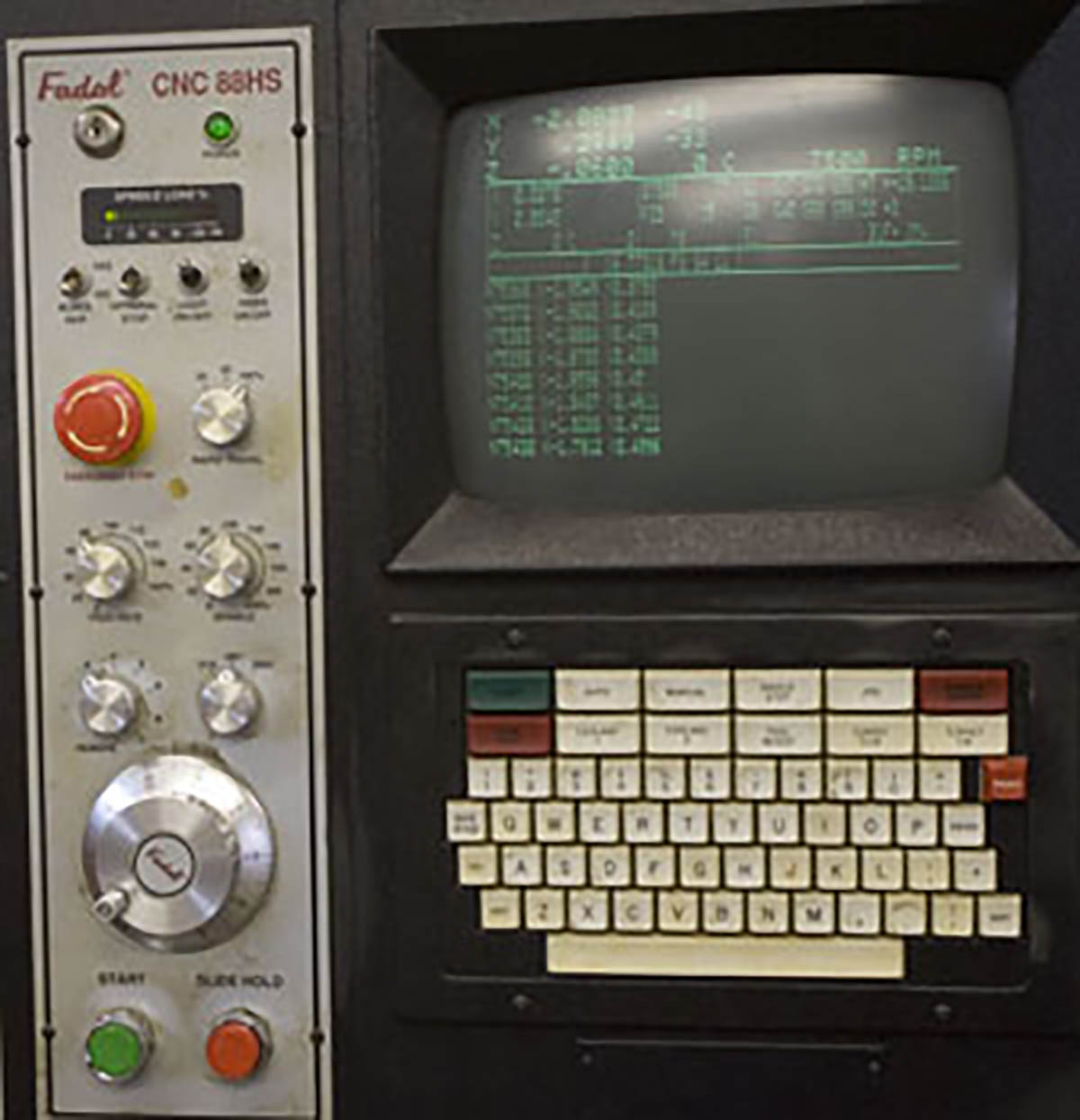 “A lot of jigs on the market started from someone else’s design and then they changed one thing or the other,” Julian said. “Our jigs begin from scratch in CAD. That’s why we have so many unique products. Most folks won’t take the time and don’t have the resources we do to create from scratch.”

The other unique thing is to hear others talk about some of the creations Julian has made that haven’t hit the big time markets yet. Bryan Head, their national sales manager is an avid angler and raved to us about some of the spinnerbaits Julian has created that are absolute fish catchers. I guess in urban vernacular, Gayle is considered an O.G. — “Original Gangsta” in lure making!

Jewel is releasing a new co-branded spinnerbait and football jig through Gander Mountain’s X-Factor line of baits that look to be absolute killers. Julian and Head were both very excited about the new spinnerbait. We’re very excited to see what Jewel comes out with next and left with a new appreciation for why we love their jigs and products so much. 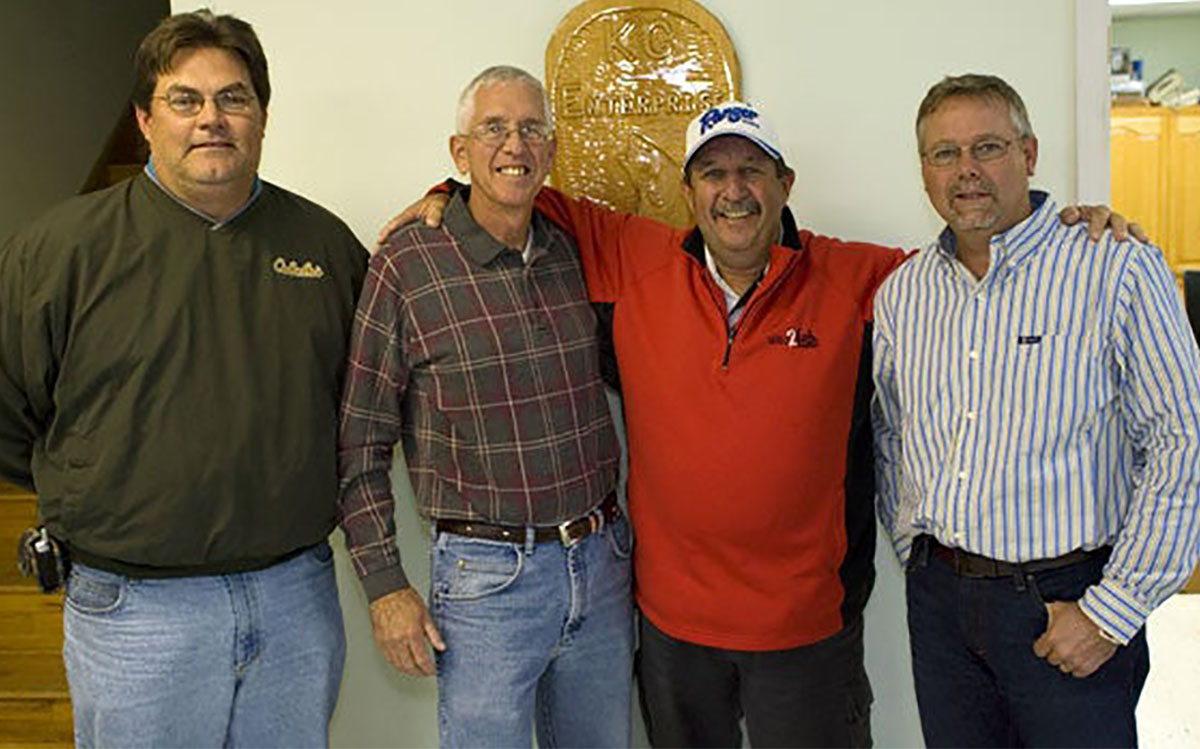