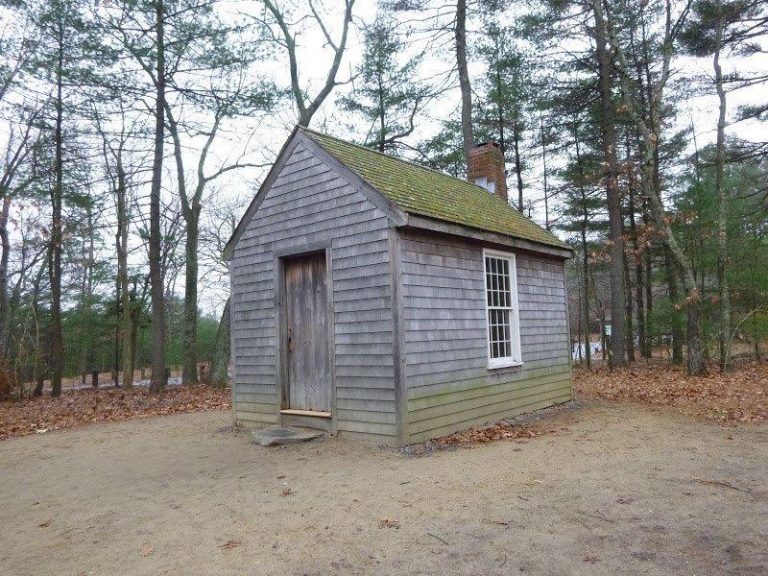 Not the grub-worm, not the perch, not the pickerel, not the,

There is no escaping.

Move around all you want.  Hide.  Change your name, your looks, your clothes, your nooks.

But you will still be the grub-worm.

Think about this for a second, every breath you take has in it molecules from every breath ever takenâ€¦on earth.

In your lungs, molecules from the last breath of Caesar.

In your lungs, molecules from the Gettysburg Address.

And if you believe in Adam.

And if you believe in Eve.

Yep, in there too.

As is the roar of the tiger.

As is the screech of the owl.

As you are in the last gasp,

“The universe is wider than our views of it.”

In high school, I thought Henry David Thoreau’s Walden was on the same par as the books, Animal Farm, or Lord of The Flies.

And that par was simply this â€¦ stupid.

two of those books still suck.

If you want me to dance half naked around a fire you better be the Dallas Cowboy Cheerleaders doing the askin’.

But Henry David Thoreau â€“ now Hank â€“ was onto something

And the something that Hank was onto was â€¦ nothing.

Now I’m not going to get into some kind of English 101 literary lecture here, you want to really know about Thoreau and his book Walden, Google it, and you’ll find 15,900,000 results in 0.26 seconds.

We all need more of less stuff. 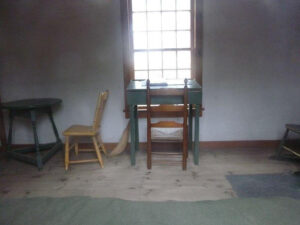 Having yourself an iPod, iPhone and iPad would pretty much get H.D. screaming again.

Pick one dudes, and sit down.

Back on that Wednesday, the ninth day of August, 1854, the day Walden, or, Life In The Woods was first published Thoreau had pretty much had it with everything even though back then, those around him had far more less stuff then most of us could even fathom.

Walden, or, Life In The Woods, is Thoreau’s tale of going back to live with nature even though most of the America around him was still pretty much â€¦ nature.

I went back to nature like Thoreau last Saturday when I turned off my smart phone and left it in the car.  Little steps man, little steps.

Dr. Mac, my butt-replacement doc,  and I have been planning this trip for months now, maybe longer, possibly even back when I did this story with him last year:  http://www.bassmaster.com/blog/91101

Me:  “Dude, you up for fishing Walden Pond.”

Thoreau would love that, much more, less planning.

“Our life is frittered awayâ€¦”

So as to not be sued here for any number of things, slander leading the list, I’m going to use an age old literary tradition called, Literary License (meaning pretty muchâ€¦lying) and not be real specific with names for the following:  If you want to have a job where being wrong isn’t a fireable offense â€¦ be a weather dude.

Last Tuesday’s weather report:  Sunny, high 55-60 degrees, which convinces me to get on Facebook and announce exactly this to the world:

Today is the day we walk within the footsteps of Thoreau on the banks of Walden Pond … plus I have one surprise thrown in for Dr. Mac … and the universe is cooperating … it is Dec. 4 … New England … and the temp today could hit near 60 degrees and sunny …

Then I walked outside.

Cloudy, misty rain that sneaks up on your face and dribbles down to gathering in your shorts â€¦ temp â€¦ 36 degrees.

I am very more less happy with the weather dudes.

I throw in the back of the 4Runner â€“ rain gear, snow gear, slip on rain clogs, pull on snow boots, my gloves for fluffy snow, my gloves for snowblowing, my Army hooded sweatshirt, and the Bosnia Army Peace Keeping jacket I bought at the Army Surplus store over on the turnpike.

Should at least get me through the morning.

Head the few miles up the road to Dr. Mac’s “house/sort of farm” he and his wife Lee Ann live on. I pull in his driveway, and because of the cold, I do the db version of beeping the horn. I text him, and this is exactly what I text:  “Knock, knock.”

A moment later Dr. Mac walks out carrying an armful of basically the same stuff I have plus a fishing pole or two and some tackle stuff.

“Lee Ann is in the kitchenâ€¦”

So I sort of open the door of the 4Runner and just slide out because of all the clothes I have on, go give Lee Ann a hug. She tells me Bob (what she calls Dr. Mac which she can since she is married to him and me and him are just good friends, when the two of us are just alone I pretty much just call him Mac â€¦ or other names) has been looking forward to this for a long time.

When I go back outside Dr. Mac is sitting, waiting in the 4Runner, with the heat on.

Me:  Yes head shake â€¦ I have no idea if you can quote a head shake or not so I won’t, but my head shook “Yes” so my mouth didn’t need to back that up much.

And off we go.

It’s a two hour drive, two hours of buddy talk.  Talk about our wives, our children, dogs, trucks, snorkeling?, Bigfoot, UFOs, taxes, three pee stops because I still have that prostate cancer stuff going on, a jerk driving too fast, a jerk driving too slow, Bob Dylan, The Judds, penny slots, whether we are going to do the fishing trip to Puerto Rico, and the fact that the magic shot he gave me in my knee three weeks ago wasn’t workingâ€¦

Dr. Mac:  “If it was magic it would have fixed both knees.”

Me:  “Quit with the medical talk, what’s it mean that it didn’t work.”

Dr. Mac:  Takes a break from sipping coffee, looks at me and says, “MRI.”

I’m pretty much hospitaled-out which means I’m going be limping for awhile.

Zoom through the EzayPass lane exit, two lefts, one right, one left, one U-turn (my bad), stop in parking lot.  Open door, get out, and right there isâ€¦

Off to our right is  a modern reconstruction of the cabin Thoreau lived in, I hope the dude wasn’t a big guy.

It is a very simple cabin, sort of like the very base model of the Home Depot backyard sheds, two windows, one door, Thoreau did not choose the high end back yard shed.

You can read all about it by going here:  http://www.mass.gov/dcr/parks/walden/

After walking around the cabin and reading all the information plaques put there by the state, we go into the park office to get a fishing licenseâ€¦

Can’t get a fishing license at the park, nor it seems anywhere in the town of Concordâ€¦you can buy one on-line but you need to print the thing out to “have on your person.”

Dr. Mac looks at me.

We say nothing outside our brains, but this is what our brains are saying to each other, “Dude did you bring a printer.”

Because both our brains know the answerâ€¦it tells our mouths to shut up, better to protect the whole body that way in front of strangers.

But one of us does say this, “The must have a library in town, they probably have a computer and a printerâ€¦”

I’m not saying who came up with that idea because one of us has 14 years of higher education and is a freakin’ doctor, and one of us is not but who may or may not have mumbled something about a library.

Dr Mac goes in first, walks around a counter, up some stairs, which I have to take one step at a time because of that non-magical shot, and then he comes to a dead stop, turns to me and says, “Dude we’re in Hogwarts.” 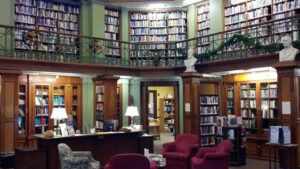 It is like the coolest library I’ve ever been in, sort of like a rotunda thing, ‘cept it isn’t round, is 3 levels tall with a dome up top.  It is like standing in a leather and wood whirlpool of books.

Why we are standing in the middle of this place, the head librarian comes up to us, me actually since Dr. Mac is still wearing the hood of his sweatshirt up and looks kind of like the more nasty looking one to have to deal with, and asks me this, “Can I help answer any questions for you.”

Me:  “Yeah, do you know if all those marble busts of people talk and have smokes at night when no one is around.”

Head Librarian:  “Possibly, but I think they are real quick to go quiet when I hit the lights.”

Cool answer lady, we’re going to get along just fine.

After some more talk, by whom and what said I forget, and some picture taking of Hogwartsâ€¦Concord styleâ€¦the lady says we can use the computer “over there,” to get the fishing license. 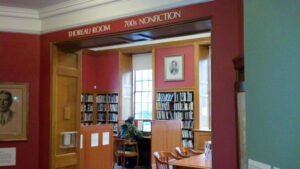 “Over There” turns out to be the Thoreau Room.

The universe sometimes just works that way, and it is better just to shut up and let it do its own thing without getting in the way.

Dr. Mac does the fishing license thing, head to the printer, find out that the Concord Free Public Library needs a nickel to print anythingâ€¦find out neither one of us has a nickelâ€¦find a buckâ€¦couple clicks here and there and we become legal to fish in the state of Massachusetts.

GPS lady takes us back to Walden Pond.

And we go fishing â€¦

In a life filled with junk,

how do we see the jewels.