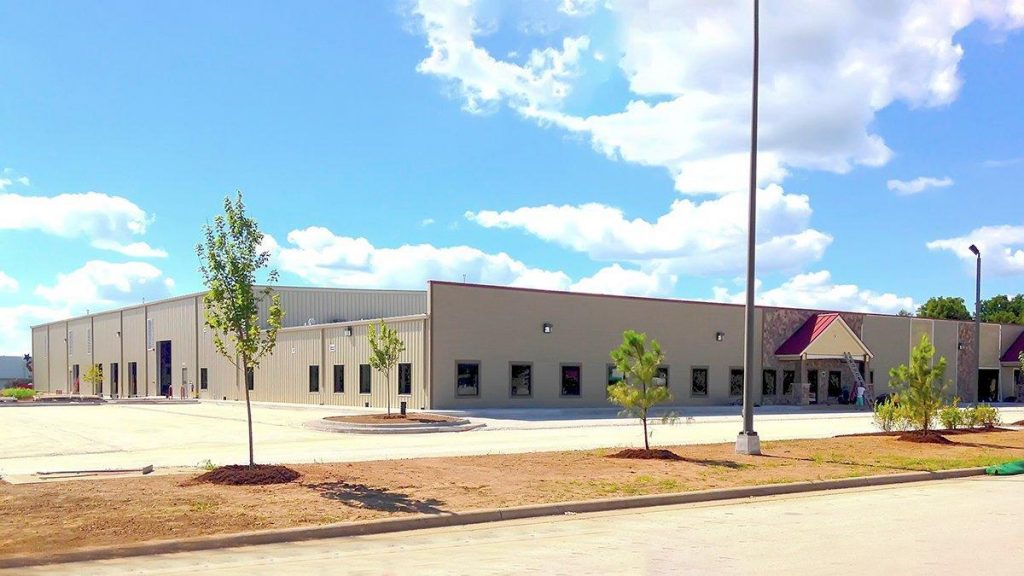 See the Photo Gallery at the end of the article!

I recently ran out to Springfield, Mo. to take a tour of the new Lew’s National Headquarters with Jim Lovan, Mike Eutsler, Lynn Reeves, FLW Tour pro Terry Bolton and several others from the Lew’s team. They have been moving from their old offices and warehouse to a new consolidated office, museum, warehouse, repair facility and tackle shop under their Do Outdoors umbrella to showcase their new products as well as service the needs of anglers in southern Missouri and northern Arkansas.

The team at Lew’s moved into their new 58,000-square-foot facility over the course of the past two weeks and their grand opening to the public is this weekend, Sept 11-13. It seems fitting to me that they are opening on a day all Americans are taking a moment to remember because they are so passionate about supporting troops as well as police, firemen and EMTs through programs like the American Hero project as well as coordinating fund raisers for officers injured in the line of duty. 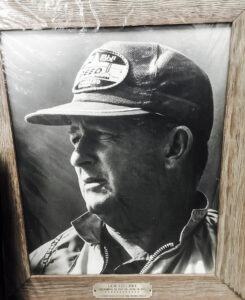 Lynn Reeves, CEO and longtime family friend of the Childre family and fellow fishing industry veteran and President Gary Remensnyder have sought to carry on a proud tradition of expanding and innovating in the fishing industry that Lew Childre and his family began in 1949 on a quest that would help shape the development of fishing tackle as we know it today.

Lew Childre, like his father, was a very approachable and likable fellow who was absolutely eat up with fishing. He and his wife Vivian navigated some rocky roads in the early days selling shrimp to bait fishermen, then opening up a small tackle shop that would ultimately lead to the humble beginnings of what would become one of the most iconic brands in fishing.

Childre was pulling a bamboo pole out of a stack for a customer one morning and had epiphany of sorts when he realized how disgusted he was at the lack of consistency from one bamboo pole to the next. That moment became the catalyst for what would drive Lew to bring better more functional tackle to the angler.

From bamboo to fiberglass

Childre sought to find better more consistent bamboo. He started with local suppliers but quickly realized he had to expand his search. He eventually went to Japan to find the grade and quality of bamboo he needed. That trip led to the discovery of innovative Fuji rod components that Childre brought back stateside for making better tackle.

While his bamboo rod business boomed he was studying on new materials to fishing which led to the development of his Lew’s Bream Buster fiberglass telescoping rods. And eventually to the famous Speed Stick casting rods where Lew Childre was developing multiple actions in his line of rods. He simultaneously was hand carving out of a wood a better “pistol grip” for his rods that Fuji would later create for him out of rubber.

These rods became the staple of bass fishing in the 1970s. Meanwhile he was busy working on a better baitcasting reel than the round reels that were available at the time. His Speed Spool baitcaster was an instant hit among fishermen. It fit in your hand easier, and its narrow spool, low profile and fully disengaging level wind made it an amazing casting reel for the era. The Lew’s brand had become iconic in being known for building better products.

From then until now

Lew Childre died in a plane crash in 1977. He was survived by his wife and two sons, Craig and Casey. They carried on the tradition of innovation and expansion of available tackle for fishermen.

The family owned business sold to Browning in 1989. In 2009, Reeves and Remensnyder were able to buy the brand back from Browning and relocate to facilities in southern Missouri. Reeves being a longtime friend of the Childre family, was adamant about getting the brand back to the top of the industry by making great products, with innovative features and designs, that anglers would appreciate and enjoy.

Since 2009, Lew’s has seen a rapid growth in not only market share but in loyal customer base, staff and of course facilities. Their newly opened $3.5 million expansion in Springfield, Mo. is a testament to their continued advancement of quality fishing products for anglers. Yet they remain some of the most humble people I’ve been around in this industry.

“It’s humbling to be able to design a facility according to specific needs of operation, and we’re fortunate to have been able to do exactly that with our new Do Outdoors home,” said CEO Lynn Reeves. “It’s our pleasure to be able to remain conveniently located in the middle part of the country in a great city like Springfield. We’re confident this spot and facility will allow us to continue our commitment to customer service excellence for years to come.”

They talk about their competitors with an appreciation and reverence that is hardly imaginable in this industry but a modesty that permeates through their company. They are all “roll-your-sleeves-up-and-get-to-work” people from the top to the bottom. They are never satisfied. Not even on the rollout of their latest products.

Reeves is not only an industry veteran but a historian, observer, fan and friend of all things fishing. His museum of fishing tackle will be worth the trip to their new location for most anglers alone. Their new offices are awesome. They have one room that is solid slate board so they can display all their new tackle to potential retailers and partners and keep all their new designs out there to attract input.

You can walk up to the customer service window and talk to someone about a reel or rod that might have messed up or been damaged and get it serviced right there. They keep a massive supply of parts on hand to be able to help an angler out, even in a pinch.

The folks in this company are avid anglers, they have sold fishing tackle, they know the good from the bad, and it’s amazing to me how as a new product comes out they are already trying to figure out how they could have made it better. They are tireless when it comes to making products better and more innovative fishermen. I like that. I think Lew Childre would have too.

If you’re within driving distance of Springfield, Mo., you ought to run by and check out their new facility this weekend at their grand opening. For more information on Lew’s and their new offices, visit lews.com.

Check out these behind the scenes photos at their new facility: 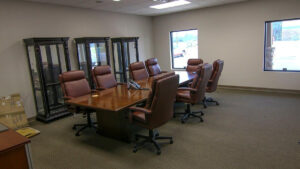 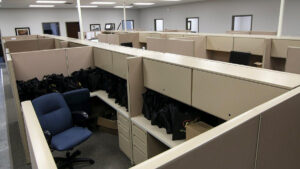 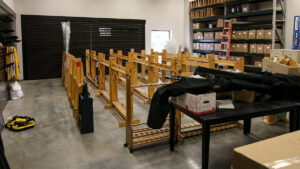 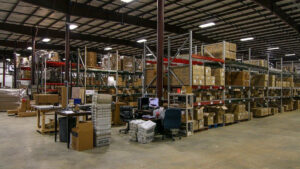 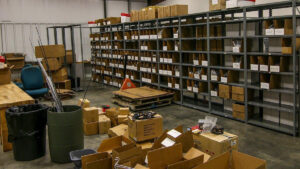 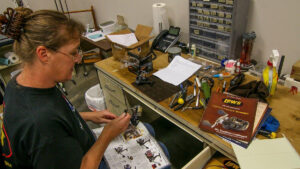 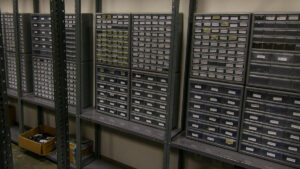 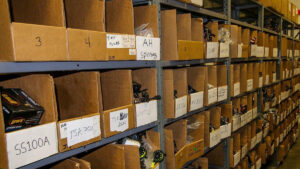 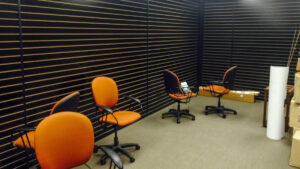 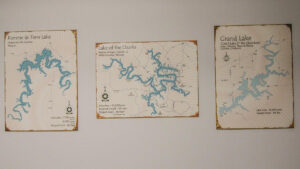 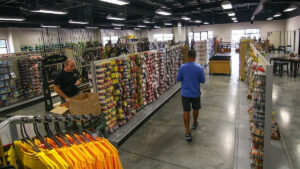 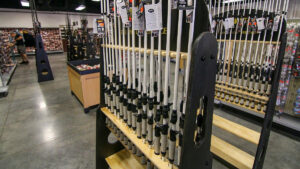 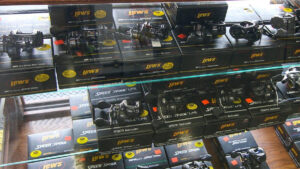 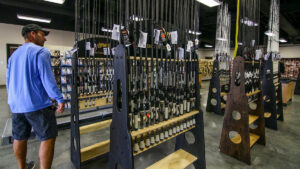 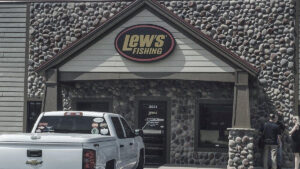 *Editor’s Note: The antique fishing tackle museum will not be finished for a few more weeks so we didn’t get pictures of it. But we’ve seen a good portion of the products and you will want to check it out.