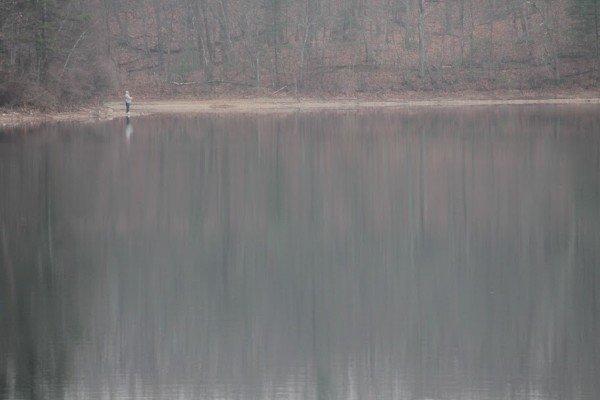 “A lake is the landscape’s most beautiful and expressive feature. It is earth’s eye; looking into which the beholder measures the depth of his own nature.”

What is it with water,

that draws us to it.

Is it, because that is from where we came.

Is it, because we are mostly made of the same stuff.

What is it with an ocean.

What is it with a lake.

What is it with a pond. 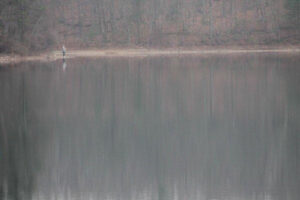 Dr. Mac however, talks a bit louder.  “It’s a kettle hole,” he tells me as we walk a path we shouldn’t be on.  We would have known that had we been able to read the sign on the fence “¦ but you have to be on the print side of the fence to read it.

We were down by the water, down walking along in the footsteps of wild turkeys and deer”¦

Dr. Mac said, “Ten-thousand years ago there was a huge chunk of glacial ice sitting right here, when it retreated it dug a 102 foot hole all the way down to the aquifer.”

I mumble back, “Any colder and the glacier will be back.”

Dr. Mac somehow manages to hear it “¦ and pulls the hood of his sweatshirt up to cover his head. 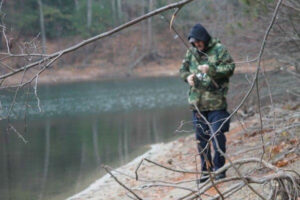 The pond covers 61 acres and is 1.7 miles around, we are what seems to be like 14 miles in on the path, what with the non-magic knee shot, and we are heading straight to a small cove called “¦ Thoreau’s Cove.

It is the cove his cabin overlooked.  His front yard.

Had we been walking here, where we shouldn’t have been, back there in time from July of 1845 through September of 1847 we would have walked in his footsteps, maybe even met the man”¦the man who preached simpleness but who in his death has created “business-ness.”

It is an area that has not followed Thoreau’s lead.  Walden Pond is just down the road from the intersection of Thoreau & Walden Street.  Concord, Mass. is a beautiful little New England town that dates back to 1635 and is filled with history and quaint shops featuring some sort of Thoreau inspired merchandise. 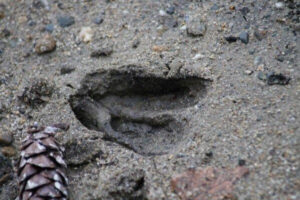 It is one of my favorite places anywhere, but I’m sure Thoreau – who is buried there in Sleepy Hollow Cemetery on “Author’s Ridge” along with Nathaniel Hawthorne, Louisa May Alcott and Ralph Waldo Emerson – is twisting and turning in the family plot.

This from Thoreau:  “Simplify, simplify. Instead of three meals a day, if it be necessary eat but one; instead of a hundred dishes, five; and reduce other things in proportion.”

Thoreau, if anything, has not been reduced here.

Walden Pond is located right next to the Route 2 turnpike”¦a very busy road, and is in fact only 20 miles from downtown Boston.  Nothing within 20 miles of downtown Boston “¦ is simple.

Except, EXCEPT, when you stand in Thoreau’s Cove and look out on the water, look through the eyes of Henry David “¦ and all is quiet, and all is still, and all is “¦ perfect.

Cold, but damn near perfect. 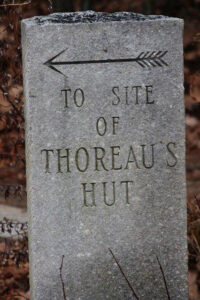 As Dr. Mac and I stood there, it took a few moments for us to get it, but we got it:

Yep, right dab smack surrounded by all that is the greater Boston area, 10th largest in the USA with over 4.6 million people, dumped right into all that noise this is what I heard in Thoreau’s Cove,

Amidst all the noise.

All I heard where the whispers, of Henry David Thoreau.

“As if you could kill time without injuring eternity.” 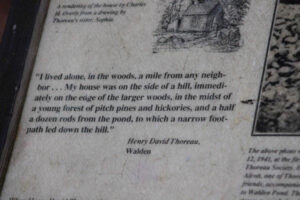 Dr. Mac fished some on the banks of Thoreau Cove, according to the Massachusetts Department of the Outside: Fish Stuff in Walden Pond you can fish for both large and smallmouth bass, bluegill, pickerel and some other things but as Dr. Mac said….

“This isn’t about fishing, if you asked me if I would catch a bass here in December my answer would be no “¦ sometimes fishing isn’t about the catching, it’s about the being “¦ being fishing.”

After about an hour and a half of nothing, no bites, no chance of bites, and what looked like to be ice forming on the line, and what looked for sure to be Dr. Mac “¦ and myself “¦ shivering “¦ Dr. Mac and I had an in-depth discussion”¦

“We are constantly invited to be who we are.” 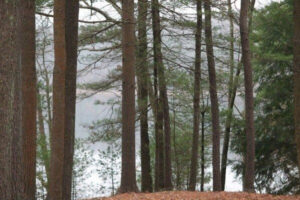 Back in the 4Runner I tell Dr. Mac, two things:

“I’m freezing, lets do the interview in some warm restaurant with a fireplace and hot coffee.”

“Before we do that I want to take you someplace else.”

Dr. Mac being a buddy on a buddy trip shakes his head yes, and goes back to shivering.

I reach over and tweak the heating system all the way to the right “¦ HIGH.

And we leave Walden Pond.

We drive through Concord, Mass. back by the beautiful Hogworts library, around the never ending Massachusetts designed rotary system (think circle in the middle of the road where basically everyone it seems has the right of way) head down a road a piece and then pull into a parking lot.

Dr. Mac looks at me.

I turn and look at him and say exactly this, “Old North Bridge dude”¦this”¦this is my Walden Pond.”

“What people say you cannot do, you try and find that you can.” 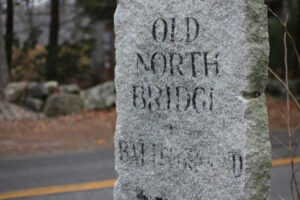 I shouldn’t be here.

I shouldn’t have any of this.

Shouldn’t be writing this thing.

Shouldn’t have Dr. Mac as a buddy.

Shouldn’t have people who read me.

None of it should be mine.

I spent years in high school being told I was stupid”¦and yes flinch if you like, flinch as you damn well should, but educators with big degrees and skinny ties called me STUPID all the time.

I was told in front of a class once exactly this, “Mr. Barone you came from nothing and nothing is what you will be.”

And had already zeroed out.

To me, Old North Bridge is hallowed freakin’ ground.

For four of the past five years, before the start of the season of B.A.S.S, I have driven the couple of hours from my house, to this bridge, and walked the bridge.

I have, as a grown man, stood on that bridge with tears running down my cheeks.

It is that exact spot where nothing stood up to something.

Where regular folks who came from nothing, stood up to an invading army that came with everything.

I come here to get jazzed by the energy of the long gone nothings.

I come here to thank the nothings.

Thank them for showing me the way.  Even back when the “educators” where calling me stupid, saying I would be nothing, even back then I secretly read everything I could about the American Revolutionary War, even while being stupid I knew of the doings of Old North Bridge.

So while being called stupid really hurt a 15-year-old child.

So while being told that I had a value of nothing by the somethings, I knew this, knew in my mind what Old North Bridge taught me.

Knew, that someday, me, the nothing child, was going to come back to the somethings”¦and kick their ass.

“Things do not change, we change.” 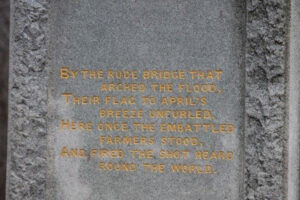 Dr. Mac, it seems, was also a young nitwit.

I believe that is why, at our core, we get along so well.  We are both blue collar dudes, come from blue collar neighborhoods, blue collar parents.

Don’t know how he did in high school with grades, but I do know he also had issues with school and “educators.”

Many of his issues, like mine, were self made, but it is my heartfelt belief that the role of a teacher is to “educate” not “indoctrinate.”

When the main goal is testing and testing numbers”¦folks don’t let them kid you, that’s indoctrination.  Everybody learning the same thing.  The role of the masses.

Education on the other hand, is growing the individual.  The self within us.

Dr. Mac is not going to be happy when he reads the following, but the dude is the embodiment of a hero.  In Afghanistan, at the foremost front MASH unit he saved the lives of shot up special forces military guys while operating on them in a GOAT BARN.

At the hospital he works at, St. Frances in Hartford, Conn., he gets the cases, the tough orthopedic case that others can’t handle.

I know that for an absolute fact because I WAS ONE OF THEM.

For years my orthopedic dude was this other doctor there, but when it came down to the nitty-gritty of doing a hip replacement on me, and when he saw how bad everything was in there, my doctor back then called me into his office and told me that he would “try” to do my surgery but that it really was a bit much for him, “so I’m going to send you to one of the best, a guy who can do it and do it well.” 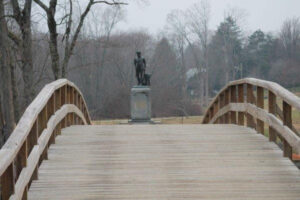 That guy was Dr. Mac.
This day, when I brought Dr. Mac to Old North Bridge, I knew it was his first time there, I know this guy well, we normally just joke around with each other or throw buddy jabs back and forth, but at Old North Bridge, Dr. Mac”¦left.

And on the bridge stood only a guy named, Bob.

Bob, who right out of high school joined the Navy, then after that tour, years later, joined the Army.  Bob, who told me that if he had to do it all over again, would follow his dream and would have become a Navy Seal.

Bob, who has held the cost of freedom in his surgical gloved hands.

Bob”¦who walked the bridge in silence. 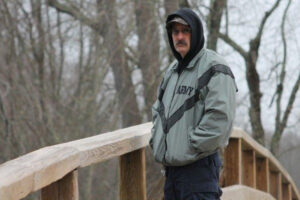 At one point I wanted to take his photo on the bridge and as I told him to turn and look at me, I saw through the lens that when he had taken his heavy winter coat off, underneath it was a sweatshirt that had printed on it, this “Army.”

I took the photo then walked up to him and said this, “You know dude I don’t know where the US Army really started, but to me that lettering on that sweatshirt”¦that word”¦ARMY”¦started right here”¦right here when common dudes like us put down their ploughs, their pitchforks, their blacksmithing stuff, and picked up their rifles and went out and stood up to an invading army”¦to me, in that moment”¦America had it’s own Army.”

Dr. Mac just looked at me, and then I said, “”¦and what happened here stretches all the way”¦to you.”

Dr. Mac put his hand on the wooden rail and walked down the bridge some”¦and I gave him his time, his space, his moment”¦to be”¦Bob.

And after a bit, we drove back into the town of Concord, Mass.

About the spirituality of “¦

“Many men go fishing all their lives without knowing that it is not fish they are after.”