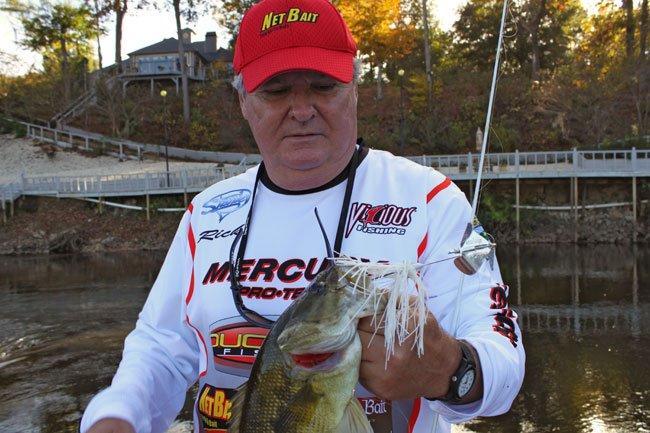 In the mainstream bass fishing world, the majority of the focus is tournament driven. Itâ€™s not necessarily a bad thing as the focus is there because they have to figure out how to catch bass better than anyone else on a fishery because their mortgages depend on it. That type of pressure results in some great fishing success.

But as a result, very little light ever shines on non-fiberglass boats in hard to reach water. Once in a while weâ€™ll hear of a touring pro taking an aluminum boat way up a creek or river and winning a big event like Kinami pro Steve Kennedy did this past summer in the PAA event on Neely Henry.

We saw it in 2011 on the FLW Tour as well when Mercury pro John Cox won the Red River Tour event using a small boat to gain access through a culvert that was too narrow to take his big rig through. The same was the case a few years ago on Dardanelle when Strike King pro Mark Menendez won his first Elite Series event using his aluminum boat to access water that was unreachable by the rest of the field.

But these are once a year instances for the most part. The other 364 days a year are spent with the spotlight on Van Dam triggering schools of bass out on ledges or Tharp busting big bags in the grass. The fish in hard-to-reach places are left alone, unpressured until the next tournament angler decides to roll the dice and run his cameraman way up river exposing what was there all along.

For Coosa-River-region native Rick Redmon, fishing skinny water is a well-known way of life. Hosting his own local television show, Venture Outdoors, with co-host Don Day and fishing tons of pot tournaments over the years in central Alabama, he has become quite familiar with the rocky rapids of the Coosa River and other places like it.

Redmon started running the Coosa nearly 15 years ago with now FLW Magazine Editor Colin Moore in Mooreâ€™s jet boat and hasnâ€™t slacked up since. Throughout the years, he has had a couple jet boats of his own or borrowed one from a fishing buddy to keep capitalizing on the seldom pursued spotted bass that inhabit the region.

Learning how to fish this water isnâ€™t nearly as complicated as learning how to run it. Since a lot of the water Redmon runs is less than a foot deep it can be very dangerous and shouldnâ€™t be attempted halfheartedly. However, as is the case with most areas like this around the country, there are public accesses where canoes, kayaks and aluminum boats can be launched from the bed of a pickup and fished in calmer pools.

Most bass in these hard to reach areas are resident fish so the fishing is great year round. One of the biggest keys on this particular river anytime of the year is current. However this element can be a little harder to detect as opposed to many lakes around the country. Waiting for a buoy to start leaning isnâ€™t exactly the tell-tale sign here. Minimum flow on the Coosa River is one turbine which, for illustrative purposes is too strong for a 24-volt trolling motor to maintain its ground on full throttle. 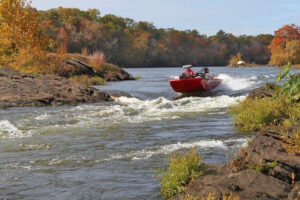 Since these fish are exposed to such a strong current, 24/7 â€“ 365, they become accustom to it, and for all intents and purposes, act the same as typical river and lake fish do in slack water scenarios. Only when the second and third turbines kick in do these fish really activate and begin to stack up in eddies.

The best indication here is a wall of water headed your way. In just minutes, the whole river will rise 3 to 4 feet and white rapids will cover the previously exposed rocks. When the water is running like this try to find a slack water area where you can hold your boat in position and target the eddies behind rocks and trees. The bass will be doing the same thing you are. They will position themselves in these eddies and wait for the current to bring the food to them.

â€œMy favorite bait to throw when the water is running is a spinnerbait,â€ Redmon said. â€œBut a bottom bouncing bait like a jig or tube works well too.â€

Since the boat is pushed along in the swift current, covering water is crucial and therefore one of the main reasons Redmon prefers the spinnerbait. The Coosa River spots are aggressive by nature, especially in current so they typically react well to the spinnerbait.

If you can get into one of the slack areas and throw towards the current, basically you just need something in the 3/8 to 1/2-ounce range whether itâ€™s a spinnerbait, jig or other bait. Pitch the baits around all the current breaks letting them fall close to the rocks where the bass should be. The great thing about the extensive amount of current is that each cast is aimed at virgin water.

The current constantly cycles fish in and out of these eddies, so just because you fished a rock 5 minutes ago without a bite, doesnâ€™t mean thereâ€™s not one there now. The only real problem with this is you rarely get second chances. If a fish chases your bait out of an area and misses it, the bass is most likely 50 feet downstream before you can make another cast.

When the current slows to one turbine, the fishing can be a little tougher. Although the fish are more wary in this slack water, the bigger problem is the fish scatter out of their groups. These bass start to roam, and though Redmon will still fish the current and eddies with spinnerbaits, the lesser current calls for a little change up.

Heâ€™ll switch over to a soft plastic jerkbait like the NetBait Super Twitch or a shallow to medium range jerkbait like the Jackall Squad Minnow. These baits can be fished along the seams where the current is fading into the eddy. The bass are sitting in these areas waiting for the current to bring them food. So your job is pretty easy. Just cast into the edge of the current and allow it to wash the bait right in front of the fish. Keep the slack out of your line and provide a slight twitch periodically and you should be able to trigger a bite.

Another good move when the water eases up is to move towards the bank. Most rivers like this have few pockets but tons of laydowns all along their banks. Targeting bass along the banks are as simple to target as they are on most other fisheries. The great part is you can use exciting baits! Since the bass arenâ€™t as pressured as they are on most fisheries, they are often more aggressive. Topwaters like poppers, walking baits and buzzbaits can all trigger ferocious strikes.

â€œI love throwing topwaters in the fall,â€ said Redmon. â€œBuzzbaits and Sammies can catch big ones this time of year.â€

One thing to keep in mind is the clarity of the water. Since itâ€™s rolling over a rocky bottom, itâ€™s hardly ever muddy. In clear water like this, a little shade can go a long way especially for a topwater bite. This is another advantage of the banks, most of which are steep with a lot of trees standing on the shorelines. The deeper pools are best, so try to follow the channel where youâ€™ll find the deeper shady banks. 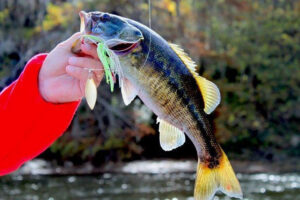 Itâ€™s important to fish the baits under the overhanging trees since the current will push the fish right up against the bank. For this reason, Redmon prefers a rod with a soft tip like the Duckett 7-foot Medium-Heavy Power Micro Magic. The extra tip allows for a roll cast that is necessary to place the bait under the cover and also prevents Redmon from snatching the bait away from the fish giving them time to take it.

Since the current is always running in a river like this, Redmon doesnâ€™t notice a lot of shad migration in the fall like you would on most bodies of water. This water is cool year round, coming from the bottom of Lake Jordan which is less than 10 miles up the river. With cool water all year, there is a steady shad population that is resident to the area. This keeps the fish fat and happy all year and is another reason they choose not to migrate in and out of the area.

Donâ€™t overlook the hard to reach water that often only locals access because you want to go run the open water like the big boys. The irony is they are often out there in their big fancy rigs sitting a few hundred feet from water that you could easily access, salivating. Wishing they could get to where the guy is running out of in a johnboat. Itâ€™s the same age old conundrum that makes a guy on the bank throw as far out as he can and a guy on a boat throw up on the bank. It would seem, there are some things about fishing easily understood but hard to explain.