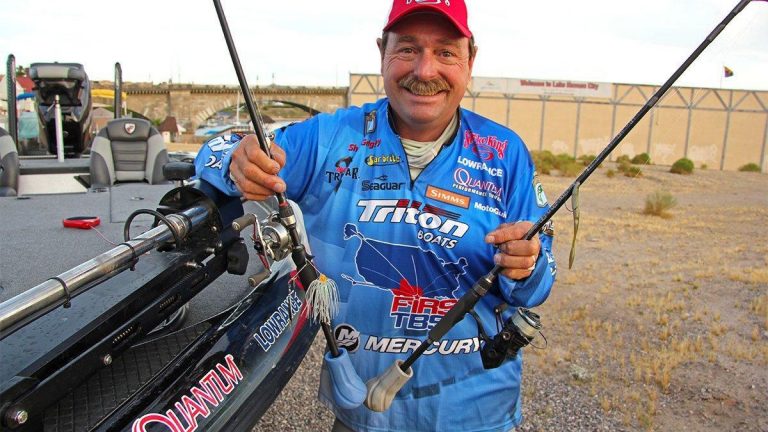 After a long day of practice Tuesday, Shaw Grigsby parked in the shadows of Lake Havasu’s famous London Bridge, took pictures of a tiny cactus on the ground with his smartphone and contemplated the affects of being bit by so many ticks over a lifetime spent in the outdoors.

Does Lyme’s disease affect memory? What kind of cactus is that?

Yes, Grigsby is high energy and a bundle of wide-ranging contemplations stored behind a signature mustache that covers a near constant smile. All of it anchored by his spiritual soul.

Heck, he’s not even certain that he’s ever had Lyme’s disease, but he swears his memory is terrible.

One thing he knows for sure—his fourth trip to Havasu in a decorated 30-year pro angling career promises to be his best tournament yet on the picturesque 19,300-acre desert reservoir.

Grigsby graciously offered 10 interesting insights as to what we can expect at this week’s Bassmaster Elite presented by Dick Cepek Tires and Wheels.

No. 1: Havasu is way better than it once was

“I won the 1984 Red Man All American that launched my pro career and the following year, Operation Bass brought us here to Havasu for the 1985 Red Man All-American to defend my title, and I didn’t do any good,” Grigsby said. “Four years later, B.A.S.S. brought us here for the Arizona Invitational in November of 1989, and I stunk that one up too. I caught about 6 pounds in the entire event. And that wasn’t uncommon, because honestly, this place was pretty void of bass back then—but it’s stellar good now.”

“There’s gonna be a bunch of limits caught. It’ll be a fun freakin’ slugfest!”

No. 2: Something for everybody

“There’s enough fish in Havasu now for guys to do well in 2 feet of water on out to 30 feet of water,” Grigsby said. “Gary Klein can have a blast drop shotting here, while Hackney can wack ‘em pitching to tulles and Shaw Grigsby is gonna have fun doing a little bit of everything.”

No. 3: Power fishing and finesse can both play big at Havasu

“The drop shot is probably gonna be the most popular lure this week, but at the other end of the spectrum, a spinnerbait on a windy point can work well too,” Grigsby said. “And it seems like the wind always blows here.”

“There’s always current here, so you can spinnerbait the tulles too. Clunn used to kick our butts with a spinnerbait on this lake.”

No. 4: Wide variety of habitat

“You’ve got marinas to fish around here, tons of tulles, and about 7-bazzillion—like with a ‘B’—bazillion, pieces of manmade habitat like bass bungalows and crappie condos made from PVC pipe and that sort of thing,” Grigsby said.

Shaw is not far off in his use of bazillion. Realizing this awesome reservoir was struggling desperately as a result of little or no natural wood or aquatic vegetation, in a highly admirable way, starting in 1993, Anglers United and several state and federal agencies sunk about $16 million worth of man hours and artificial habitat into nearly 50 coves and 875 acres of Havasu.

“I’ll say drop shot will be No. 1, a Strike King Ocho-style lure pitched to visible habitat will get plenty of use and thirdly, a Strike King Structure Bug because of its versatility.”

No. 6: The thing that would surprise you most about Havasu

“It’s got crystal clear water that you’d swear is so void of nutrients that it couldn’t possibly grow bass, but man it’s loaded with bass,” Grigsby said. “And it’s such a gorgeous place. This place is too freakin’ fun!”

No. 7: Four pros Grigsby expects to do well

“Aaron Martens, that guy is the drop shot king, Gary Klein because he loves the drop shot and he loves to flip tulles and this place has both,” Grigsby said. “I’ll pick Powroznik because he’s a great sight fisherman and there’s still a few bass on beds, and heck, why not pick Shaw Grigsby—I can promise you he won’t be slacking around this week, he’s gonna give it all he’s got.”

“For the most part, it’s post-spawn with a ton of bass guarding fry, but there’s still a few late bloomers on beds too,” Grigsby said.

“Surface temps are ranging from about 70 to 73 degrees,” Grigsby said.

No. 10: Grigsby’s guess at a winning four-day weight

“I’ll go with 76 pounds to win, just under a 20-pound limit per day,” Grigsby said. “You’re gonna see tons of limits caught this week and many of them will weigh more than 14 pounds.”