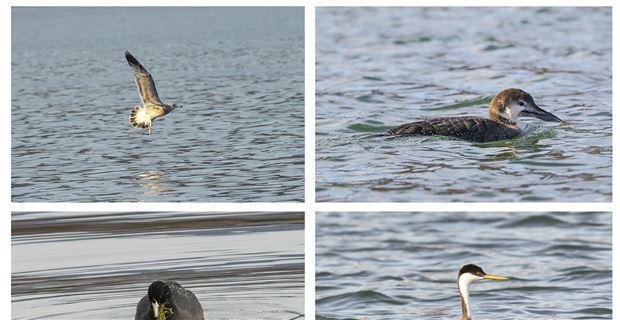 Getting the irresistible pun out of my system, Roy Hawk’s bass fishing tactics have gone to the birds. But don’t dismiss this as a not-so-clever turn of the phrase — he actually does pay significant attention to birds for visual clues to the daily bass fishing puzzle.

“You can learn so much by watching birds and watching their activity,” Hawk said.

Species may vary based on where you fish, but Hawk’s logic generally replicates with geographic diversity.

“Coots will give you the visual perception that No. 1 there is grass present and No. 2 how the grass is lined out,” he said. “Whether it be a single band of grass, or maybe it’s where a flat breaks into a drop-off. Those coots will line up along that drop-off and before you even approach that spot, you’re gaining information.

“As you see how those coots are positioned, you’re building a mental image of where you need to be casting as you approach the spot. That way you can stay back and cast to it.”

A common mistake is overrunning a target area. That’s something bird watching can rectify.

“Sometimes, when guys are looking for grass in a new area, they don’t know it’s there until they’re on top of it, they see it on their graph or they catch it on their lure,” he said. “This way, we’re gaining that information before we even get there, so we stand a much higher chance of catching something.”

Skinny necks, long yellow beaks and blood-red eyes make these birds hard to miss. Also hard to miss is the clearly animated activity of grebes diving on baitfish. Hawk said he won’t necessarily overlook chilling grebes, but those frequently diving and coming up with shad in their mouths signal the same bait that bass seek below.

“When you start seeing them in little groups and they’re chirping and making a lot of noise, they’re telling something is going on,” Hawk said. “They’re telling you that there’s bait in the area.

“That’s the time to fire up the boat at get over there right now because something going on. A lot of times, bass will be in there feeding along with the grebes.”

These larger diving birds have shorter, stouter necks and relatively smaller beaks; however, they’ll also point Hawk to bait-laden areas. The main difference between loons and grebes is that the former can gobble much larger forage.

“I can’t tell you how many times I’ve caught key bigger fish by fishing around the loons,” Hawk said. “I think it’s because they’re targeting bigger bait and a lot of times those bigger fish are in and around that bigger bait, as well.”

Drones may be disallowed in most tournaments, but there’s no rule against watching the next best thing.

“They’re up there looking down, so you watch what they’re doing; are they just out cruising or are they hovering over key areas?” Hawk said. “That’s an indication that there’s a pod of baitfish down there.

“When they’re actively feeding on bait, they’re going to be diving and you can see something like that from across the lake. That’s another deal where you want to get over there right now because something’s popping off.”