Matt Herren’s recent victory in the Toyota Texas Bass Classic, one of the most prestigious bass tournaments in the country, hinged almost entirely on the Yamaha Pro’s ability to recognize and adjust to rapidly changing water conditions, even though he’d never before seen the lake he was fishing.

Herren won the three-day event on Lake Ray Roberts in north Texas with 15 bass weighing 51 pounds, 12 ounces, beating 37 other top-ranked anglers from both the Bassmaster Elite Series and the FLW Tour. This is his thirteenth season as a fulltime tournament pro, during which he has qualified for six Bassmaster Classics and five Forrest Wood Cup championships.

“When we started our two-day practice, the lake was more than two feet high,” he explains, “and as expected, the fish were holding around shallow shoreline bushes and biting really well. Then, around noon that first practice day, the Corps of Engineers started dropping the water level, and I knew the shallow bite wouldn’t last. 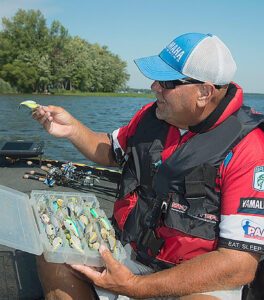 “By mid-morning the second day, I realized it was over for me in that shallow water so I started moving out to deeper water, because that’s where bass go when a lake’s water level starts dropping really fast. Later that afternoon, I found them again, between 200 and 300 yards further out, and I caught several quality fish that told me I had made the right decision.”

Understanding how bass relate to their habitat, be it a lake, a river, or even a tidal system, is an important part of bass fishing, and having to relocate ‘lost bass’ that move when water levels change is one of the most common problems bass fishermen face.

“The first question you have to ask yourself is, ‘Where are the bass going?’,” continues the Yamaha Pro, “and the second question is, ‘How are they going to get there?’. I think the key to answering both questions is locating a ditch or channel the bass can use to swim from shallow to deeper water. That’s how they’re almost always going to move, and that’s what I found that allowed me to win at Lake Ray Roberts.

“Very seldom, when bass are leaving shallow water, will they simply scatter heading back to deep water.  They move into shallow water using channels, and they move back out using those same channels.”

Herren had noticed several small channels or ditches leading out from the shallow water when he’d started practice, and he followed them with his electronics out across the shallow flats to depths of about 10 feet. There, he also realized the channels contained abundant cover, in this case flooded cedar trees, and that’s where the traveling bass had stopped and were suspended. 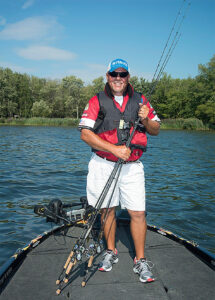 “When a lake is falling, you can fish your way down one of these channels, or just idle down it until you find some type of cover that might hold bass and start fishing there,” says Herren.  “Fish will not always move far, but they can certainly move fast, and this speed is what a lot of fishermen don’t realize.  During the Toyota® Classic, they moved 300 yards in less than 24 hours, and I’ve been in tournaments where they moved both further and faster.”

Herren caught the suspended bass with a 5/8-ounce jig he pitched into the limbs. Each tree, however, only held a single bass, and if they didn’t bite his falling jig on the first pitch, he tried another tree. He caught some fish on crankbaits and soft plastics, but the majority came on his jig.

“The part of the puzzle I haven’t figured out,” laughs the Yamaha Pro, “is why each tree only had one bass, and when I removed that bass, another one did not come in to take its place. I was actually fishing new water on every single tree, so I’m just glad there were a lot of trees for me to fish.”