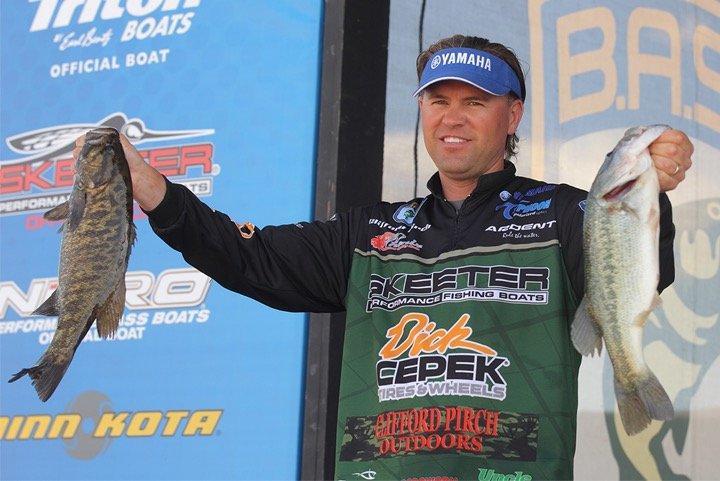 Home-state angler Cliff Pirch caught five bass that weighed 14 pounds, 15 ounces Saturday and held onto the top spot in the Bassmaster Elite at Lake Havasu presented by Dick Cepek Tires & Wheels with a three-day total of 51-11.

Pirch leads Emory, Texas, angler Takahiro Omori (50-12) by less than a pound, and Sunday’s championship round could come down to a battle between those two anglers fishing just a few hundred yards away from one another near the takeoff site.

“I just really didn’t have the big bite today, and that’s why my weight was lower than it was Thursday and Friday,” said Pirch, who narrowly missed winning a Bassmaster Open event on Havasu in 2003. “I’ve been drop shotting all week. I don’t know what Takahiro’s doing, but I know he caught a big one today.

“I need that big bite tomorrow.”

After last week’s tournament when most anglers made daily round-trip boat runs of 160 miles or more, Pirch said the longest run he’s made this week has been about 10 miles. The majority of his fish have come just a stone’s throw away from Lake Havasu State Park.

Pirch has tried several methods — and a few other areas — but he keeps coming back to the drop shot rig in the same small stretch near the launch.

“I went and tried a couple of other places today that I knew from practice, and it really just didn’t seem like those areas were on,” Pirch said. “There were a couple of areas where I caught them cranking and doing some other stuff, but that has really tailed off. I’ve had to slow down to catch them.”

Pirch couldn’t help but wonder if his brief trips out of his best area might have hurt him Saturday. He worries he might have missed the big-bite window that allowed Omori to bring a 5-pounder to the scales.

While he may try one more spot Sunday that was good to him in practice, he expects to spend most of his time in the area that’s been best to him this week — especially with the field down to 12 anglers.
“Fewer boats might make that rotation a little better tomorrow,” Pirch said. “A lot of fish have been caught out of that spot this week, but hopefully there are five more big ones I can catch.”

Omori has been a constant presence in the area this week. But he only weighed in 15-4 Thursday and 15-8 Friday because he couldn’t put his biggest fish in the boat.

The 5-pound bass he landed Saturday gave him the biggest catch of the day with 20-0 and put the 2004 Bassmaster Classic champion in serious contention for his sixth career victory with B.A.S.S.

“I see the potential out there all week,” said Omori, a Japanese native who moved to the United States to pursue a pro fishing career. “I’ve been fishing around a bunch of other guys who’ve had big bags.

I lost big ones the last two days, but every bite I had today I put in the boat.”

Despite heavy pressure, Omori said he believes there are plenty of fish left where he and Pirch are fishing.

“It’s held up three days and in practice,” Omori said. “Maybe it will hold up one more day. That’s what I’m hoping for.”

Rojas, who lives on Lake Havasu, caught 19-9 Saturday and jumped from 50th place into eighth. He also made his third-straight Top 12 cut and took over the top spot in the Toyota Bassmaster Angler of the Year standings.

“This is Havasu weather, and I know how to catch them in this stuff,” said Rojas, referring to Saturday’s bright, sunny, calm conditions. “I think the wind kind of served as an equalizer the first two days and helped some guys who don’t have a lot of experience here. These are the kinds of conditions I like, and I think it’s going to be a shootout tomorrow.”