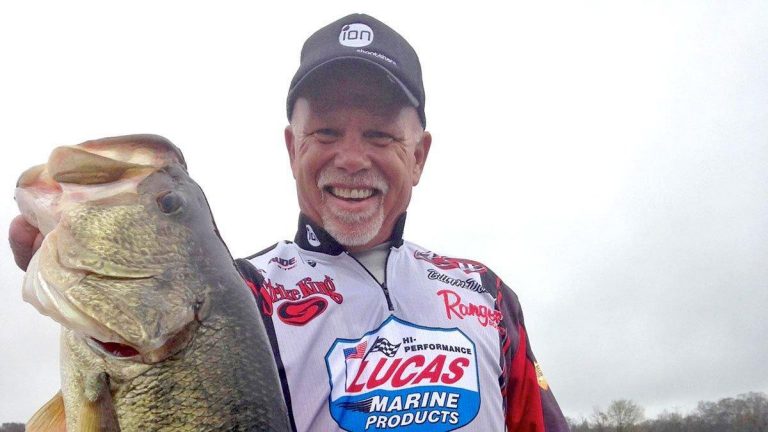 football jig was designed for clearer water ideally. attention to skirt detail. spent a lot of time digging in his creeks in KY looking at crawfish. developed colors such as naked craw, cumberland craw.

wire weed guard is a big part of it because you can make it wider and bend it up more for more weedless. closer to the hook for less weedless and better hook penetration.

Lew’s announces the addition of seasoned bass tournament angler Billy McDonald to its Team Lew’s national pro staff, citing his passion for promoting the sport, more so than his many tournament successes, as being the distinguishing qualifier behind the new sponsorship agreement.

“Whether at a tournament weigh-in or sport show, Billy is easy to find because he’s always the one in the middle of a crowd who’s smiling big and talking excitedly about something to do with fishing … he’s what the sport is all about,” said Lew’s CEO Lynn Reeves in making the announcement. “We need guys like Billy McDonald in this industry and we’re proud that he’s now officially associated with Lew’s rods and reels.”

McDonald, from Greenwood, Ind., has been fishing professionally for more than 30 years, with most of his focus being on FLW Tour and FLW Rayovac Series tournaments. He has multiple top-10 finishes, a Rayovac win and an FLW Cup appearance to his credit.

“I love to compete and always want to win, but just having the opportunity to fish is rewarding regardless of where I finish. So in my mind there’s no such thing as having a ‘bad’ tournament day,” McDonald said. “Yes, I do like to help others learn about fishing, especially youth. It’s important to me that I give back to this great sport. Lew’s has the perfect range of equipment to take any angler fishing from beginner to expert. I’m proud to be part of such a legendary brand.”

McDonald has selected the new Team Lew’s Lite Speed Spool as his primary baitcast reel of choice. He will be using the just-introduced Lew’s Custom Speed Stick series of rods that has a 7′ 11″ heavy action model among the lineup.

He said the various rod options in the Custom series match up well for his preferred techniques of pitching and flipping, and the upcoming springtime opportunities will put them to the test. The 2015 FLW Tour opener on Florida’s Lake Toho in March can’t get here fast enough for him.

“Anticipation is always high for the first event of the year, but going to a place like Toho where some giants live gets me really excited. Nobody will be working harder for a big bite there than me and my Lew’s gear,” he said.