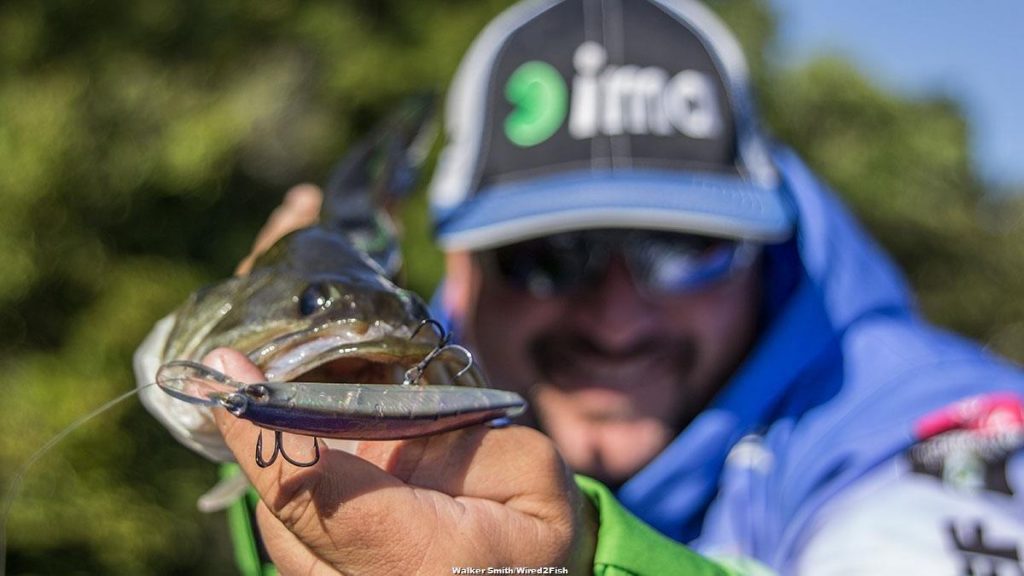 Another wintertime jerkbait fishing article”” let’s all go ahead and get our collective groans and eye rolls out of the way. It seems like everywhere you look this time of year, photos of jerkbaits and success stories flood your eyeballs and overload your mind with the latest tips and techniques. Does it get a bit monotonous at times? You bet it does.

That’s precisely the reason we tapped the brain of Elite Series pro Fred Roumbanis for this piece. His vast experience on clearwater Ozark fisheries has developed him into quite the jerkbait aficionado. Combine this knowledge with an unyielding drive to challenge conventional bass fishing knowledge and you’ll quickly realize that this won’t be the typical “jerk, jerk, pause” article you’re accustomed to reading.

He has spent countless hours this winter tinkering and perfecting his jerkbait game and has discovered some factors and variables that just might change the way you fish these age-old lures.

Why so much jerkbait talk during the winter? 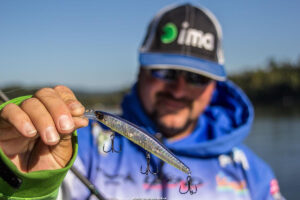 Before we delve into Roumbanis’ more intricate findings, it’s important to quickly outline the most pertinent reasons for utilizing a jerkbait in cold water. Yes, it’s cold and these long, skinny lures have long been synonymous with harsh, winter fishing conditions. But why is that the case?

Many of us put a lot of time and effort into finding the “perfect” jerkbait size. We’ll search high and low for something””anything””that will clue us into a fishery’s primary forage size. After all, it’s all about matching the hatch, right?

“Forage size is certainly a very big factor,” Roumbanis said. “But you don’t necessarily need to have a hundred different-sized jerkbaits crammed into your boat or tackle box. You can actually take your favorite jerkbait, such as an Ima Flit 120, and change the color to make it appear larger or smaller to the bass.”

It sounds crazy, but it makes a lot of sense. His thought process and reasoning is quite simple and easy to follow.

Bronze hooks can be a better option 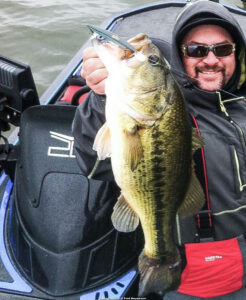 The importance of proper treble hooks on a jerkbait should never be overlooked. Sure””you can have the sexiest jerkbait on Planet Earth, but it won’t do you much good if they’re unable to effectively penetrate the bass’ mouth and pin them throughout a long fight.

While every angler has a different opinion on this issue, Roumbanis has noticed something very specific in regards to his hook selection.

“Typically, I like to leave the original hooks on my Ima Flit 120 for the first half of the day,” Roumbanis said. “They’re usually pretty dialed-in. But if I’m having issues with my hookup ratio, I’ll use a bronze No. 4 Gamakatsu EWG treble hook. Those bronze hooks have lighter wire and aren’t as heavy as nickel-plated hooks, which allows the jerkbait to suspend properly on an extended pause. The EWG style is important as well because when you hook a bass””especially a smallmouth””and it’s hot, that aggressive bend helps pin the bass a little better.” 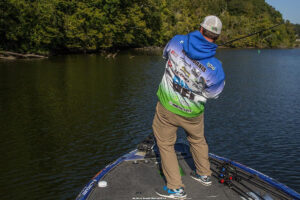 Perhaps Roumbanis’ most exciting find this winter has been the effectiveness of braided main line on his jerkbait reel. Although many of us are “trained” to use 8-pound fluorocarbon in every situation, braided line offers several distinct advantages.

Cold water. Jerkbait. Jerk, jerk, pause. We hear it until we’re blue in the face. According to Roumbanis, however, you might get more bites by kicking it down a few notches and going against the traditional cadence. 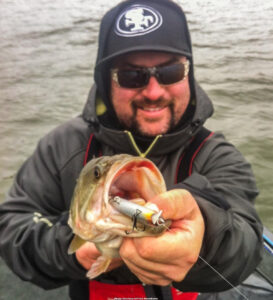 With time, you’ll find that not all jerkbaits are created equal””some dart while others slide and some suspend differently than others. So how do you know what constitutes a “good” jerkbait? Above all else, there’s one test Roumbanis performs with each and every jerkbait before making a single cast.

“If you drop a jerkbait tail-down into the water, it should slowly level itself out,” Roumbanis said. “I want that jerkbait to stay as level as possible, so I look for the tail to effectively bottom out while the head slowly rises to create a very horizontal profile. This ensures that, when you pause that jerkbait and there’s a big bass staring at it, it’s going to look natural and stay completely still the entire time.”

Yes, it’s true. Jerkbaits and cold water are a phenomenal combination that can load your boat in a hurry. If you’re having trouble getting bites with more commonplace tactics, however, don’t be afraid to go against the grain. Sometimes all it takes is some simple experimentation to turn a tough day into an unforgettable one.