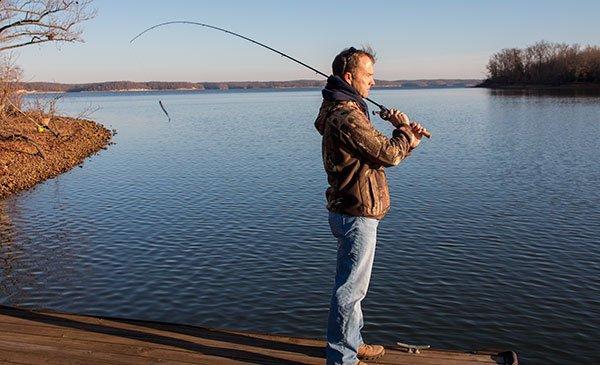 Casting is a lot of the fun in fishing and also very necessary to catch fish. So helping you learn how to cast a lure is pretty pivotal in bass fishing.  As with everything else in bass fishing, casting a lure depends on a lot of variables including rod length, rod action, lure weight, wind, drag of the lure, line diameter and material, and surrounding cover.

But casting a fishing lure or live bait is not as hard or for that matter as easy as it first seems. The variables you need to most concern yourself with is the type of reel, and then the weight of the lure coupled with the length and action of the rod.

As covered in our bass fishing reel primer, different types of reels change how you approach casting with each one. Two of the more popular models in bass fishing today are the baitcasting reel and the spinning reel.

Let’s look at basic open water casting for each of the three basic types of reels: baitcasting, spinning and spincast.

How to cast with a spincast reel

With a spincast reel, or as they are often called “push button reels,” the angler simply presses the button down and holds it as he/she swings the rod back and then as you snap it forward, you release the button to force the lure to pull the line off the spool of the reel. Most folks want to cast with an over the shoulder motion, but we actually recommend keeping the rod parallel to the ground and bring it back sideways and then swinging slightly upward and releasing the button just as your rod tip comes forward. Then point to your target at the end of your cast.

It just takes practice to time letting go of the button at the instant you swing your rod forward pointing the tip in the direction of your target.

How to cast a baitcasting reel

But if you just want to read how to do it let’s start with the tension knob. On nearly every baitcaster there is a round small knob on the side plate below or at an angle to the reel handle that controls the tension on the spool shaft. If you’re having issues finding the knob, check out this explanation of the common types of fishing reels. Once you find the knob, tighten it down until it’s snug but not super tight.

Now push the thumb bar, or the button on the reel under the spool, and see if the lure begins decending from the tip of your rod. If it doesn’t move, which it shouldn’t if you tightened down the tension, then you want to slowly and carefully loosen the tension knob until the lure just starts to move and slowly lets line off the reel.

Once you have the tension right you’re ready to start casting. To start, reel your lure until it’s about 1 foot from the end of your rod. As you get more comfortable casting, you’ll start letting the lure hang farther away from the tip of the lure to generate more distance. But for now, 1 foot is a good starting place. 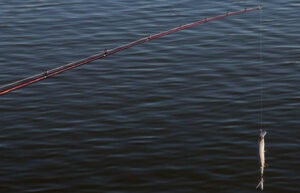 Now you need to practice depressing the thumb bar and placing your thumb onto the spool of line at the same time so no line is let out until you want it to come out. Essentially your thumb is holding the line and as you let your thumb pressure off the spool, the weight of the lure will pull the line off the reel.

At this point you need to take some practice swings. Hold your thumb on the spool after you push the thumb bar and practice bring the rod back and swinging it forward, generating moment with the weight of the lure and the bend of the rod on the back cast. Get a feel for how the lure loads up on the end of the line as you transfer from the backwards swing to the forward swing. That is where your power and distance come from.

Practice swinging the rod back sideways, rather than overhead. Over head casts can be a lot harder to learn and often yield a rapid downward cast when learning to cast, whereas a sidearm cast will give you more of a level casting plane.

After you get a feel for how you swing the rod forward and back, take a cast. Press the thumb bar down, place your thumb onto the spool to control the line. Then load the rod back and bring it forward and barely let your thumb off the spool. Don’t let your thumb all the way off the spool. You want to control the spool and only allow it to spin as fast as the line is coming off your reel. If the spool spins faster than line is being carried out by the lure and your forward momentum, you will get what most anglers call a backlash or a birds nest. It’s an overrun of line and can make a big mess that you’ll have to pick out and start over.

You want to feather the line with your thumb always. Even with good brakes, good tension and good lure weight and rod action, your spool speed and line pull by the lure will get out of sync. So you have to be ready to apply a little soft “feathering” with your thumb to keep the spool spinning at the right speed and the line staying tight on the reel through the whole cast. 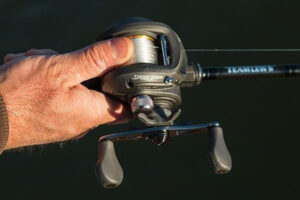 Now the most important part of a baitcaster cast that is different than the other two reel types is you have to stop the spool with your thumb just as or right before the lure hits the water. If the lure hits the water first and you don’t stop the spool completely with your thumb, the spool will keep spinning and light birds nest in your reel. You can remove back lashes and birds nests easily enough but better to not let it happen.

It takes time to learn to be a good caster with a baitcaster, but you can get a feel for it in just an hour or two in your back yard. Tie on a sinker that weighs 3/8 to 1/2 ounce and go practice in the yard. We also had a good tip with a piece of tape that will help folks just starting out and not wanting to fight with a bunch of backlashes.

There are a lot of advantages to using baitcasters so it’s worth your time to get good with them if you plan to bass fish a lot.

If you’re having a lot of trouble with overruns or bird’s nests, check out this quick tip on improving your casting with a bait caster.

How to cast with a spinning reel

Like a baitcaster, a spinning reel requires a bit of touch. Again your hand is going to control when the line is released not the reel.

Here is a quick video that outlines how to cast and fish with a spinning reel.

But basically you reel the lure up about a foot from the end of the rod while at the same time looking at where the line is on the bail and rotate that around until the line is closes to the rod where your hand is. You grip a spinning rod with at least one finger up even with the bail.

Then as you bring the rod back and then with more whipping motion than a baitcaster when you come forward, you will open your finger to allow the line to be taken off the reel spool by the force of the lure and your whip cast.

This is a bit easier to learn. Again a side arm cast can be easier to learn than an over head cast. But you basically want get your timing down of when to open your finger as you come forward.

The basic thing to remember with all three reel types and casting is to start by aiming up. You want to throw your lure with a bit of an upward trajectory so the lure has time to fly before settling down back to the water. If you want to throw a bomb with a football you don’t start high and throw it downward. You start back and let it fly upward and forward so it has time to get air under it.

If you let go to soon on a cast the lure will go up in the air real high without going very far. If you let go to late on a cast, the lure will crash down into the water not too far from you. Be prepared to get a loop, or over run or backlash or two. It’s expected and those of us that have been doing it for decades still get them. There are lots of ways to get backlashes out so it’s not the end of the world.