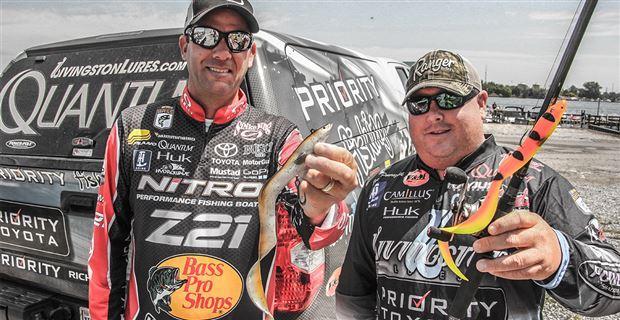 Kevin VanDam brought plastic eels to the Bassmaster Bracket event in Buffalo that Jacob Powroznik could use for cobia fishing back home in the Chesapeake Bay, but first, “J Pow” decided to cast them at muskies while on the Niagara River.

“Right after the Bassmaster Elite tournament on the Upper Chesapeake Bay last summer, Jacob was kind enough to host Sherry, my sons and I at his house to fish for cobia on the southern portion of the Chesapeake, and he guided us to three really good fish using live eels for bait,” VanDam said. “The one my son Nicholas caught was over 50 pounds; it was a blast!

“So a few months ago, when I was working the annual store promotion my brother hosts at D&R Sports, I saw these eels that one of the tackle sales reps brought, and knowing how much Jacob loves to chase cobia, I had to get a couple for him.”

VanDam never dreamed when he hauled the super-long soft plastic gifts to Buffalo that Powroznik would tie one on during the B.A.S.S. bracket event, but Powroznik is already a shoe-in for the 2017 Bassmaster Classic, so he’s feeling no pressure on the Niagara, and besides, he’s never caught a muskie.

“They say there’s some big ol’ musky swimming here, so why not take a shot at one?” said Powroznik as he spooled 65-pound braided line to a Quantum reel and flippin’ stick.

“I swear if Jacob could make a living catching cobia, he would; he loves it that much,” VanDam said. “It was fun watching him hunt for them last summer.”

“That’s exactly why I love it,” Powroznik said. “Cobia fishing combines sight fishing and hunting. You see them, you study their behavior and then you try to hook them and they fight like crazy. It’s the best of all the things I love in the outdoors.

“I still remember the first time I caught a cobia. We had been out flounder fishing and I spotted a cobia just under the surface next to a giant buoy. I made a cast to him and sure enough he bit. That fish changed my life. Before long I was out buying a boat with a tower on it so I could see them better.”

While Powroznik’s chances of catching a musky while in Buffalo are slim, his place in the 2017 Bassmaster Classic and his plans for later this week are certain: He’s going cobia fishing.