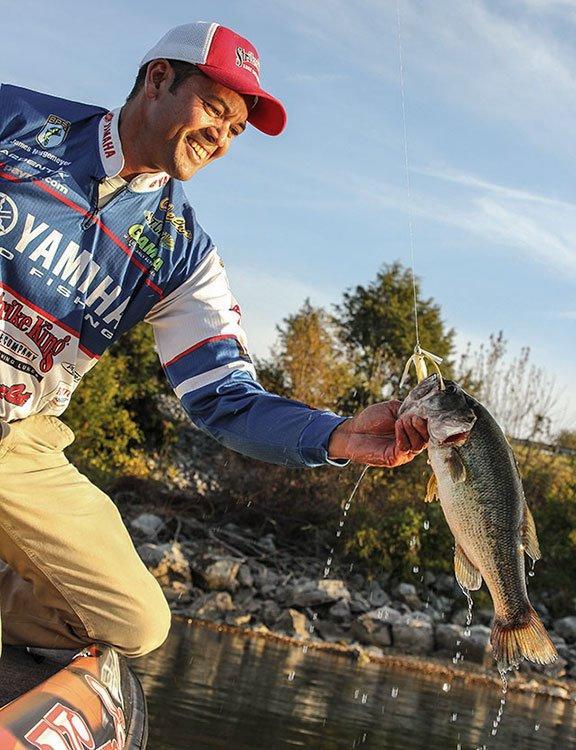 Some bass fishing techniques still excite us year after year when that “certain bite is on” as fishermen say. Swimming a jig for me is one of those techniques. I’m fond of sight fishing and love to flip bushes. But there is just something about the kind of hits you get on a swim jig that really gets me amped about fishing shallow. So I picked the brains of four Elite Series pros who have reputations as great “jig swimmers” to see what we could learn about how to swim a jig around shallow cover and not just grass.

James Niggemeyer not only  fishes professionally but also guides full-time down on Lake Fork. Over the years his eyes have been opened to the effectiveness of a swim jig by other pros like Bill Lowen. Lowen is often referred to in swim jig discussions because he’s proven how efficient it is for pressured bass. Jamie Horton has won more than 100 tournaments in his career and a large percentage has come “swimming.” Randy Howell won the first E-50 tournament on Lake Dardanelle “power swimming” a jig and uses it often in competition.

In talking with four successful swim jig anglers, there are essentially 6 things you need to know to be good with a swim jig in bass fishing: 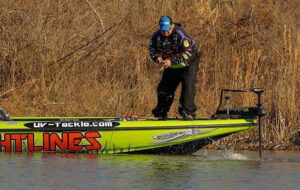 Photo courtesy of B.A.S.S./Bill Lowen fights a bass to the boat on a swim jig

Keep it up in the water column

All four anglers agree that it’s a high in the water column retrieve that often produces better. They want the fish to see it and come get it rather than dangling it right in front of them. So they will keep the swim jig usually within sight the whole cast. And for that reason, all agree it’s more effective in stained to more clear water.

“I reel it slow and high in the water column and it doesn’t seem to matter whether it’s sunny, cloudy, raining or windy,” Lowen said. “I haven’t found one magic condition where they bite it better. It comes through all sorts of cover but I like to keep a visual on the jig when I swim it.” 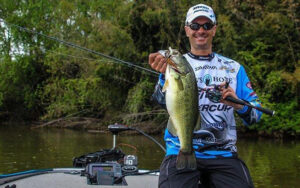 Howell and Horton advocate swimming a jig with a series of rod pumps. The will hold their rod at about 10 o’clock and pump the rod tip succesively to cause the jig to pulse through the water.

This action makes the skirt and trailer pulse as it ticks through cover, but more importantly, it slows the bait’s forward progression. It seems to cause the bait to stall half the time and what you end up with is a very active jig that stays in the strike zone longer.

“I call it power swimming,” Howell said. “It can be a lot of work to swim a jig this way, but at times it’s the best way to present a jig to pressured, spawning or otherwise leary bass.”

It bears mentioning that Lowen and Niggemeyer almost exclusively just swim the jig with no rod pumping. So a straight retrieve obviously works too. But that power swim gives the fish more of a chance to get the bait when they are sometimes leary due to pressure and can give you a good way to free a jig of cover more naturally. 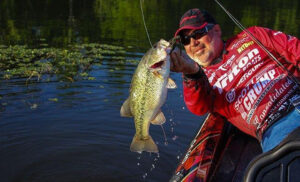 Horton gave up one of his best kept secrets and admitted he might have angered a few friends over it. Over the course of hundreds of tournaments, he has witnessed many of his biggest swim jig bass have come when his jig actually “hung up” for a second on the cover.

“It seems like when that jig actually hangs on a limb or a clump of grass and then you pop it a couple of times to free it, the bigger bass take that as an opportunity to get an easy defenseless meal,” Horton said.

For that reason, he constantly tries to work angles where he can catch the corner of likely bass-holding cover and almost stop his jig for a second before continuing with a retrieve. Swim jigs are relatively snagfree, so he often upsizes to a 1/2-ounce jig to keep in good contact with the cover and not “ride over” it too much.

Give the bass one step to increase hookups

Another great tip from Horton was a simple but extremely effective way to increase your hookups with a swim jig. Most folks want to jerk when they see or feel the violently strikes you often get on a swim jig. To combat this, Horton has developed a one-step approach to hooking more swim jig bass.

As the bass strikes, Horton turns his body towards the fish and takes a step towards the bass. This forces an additional amount of line to take up and causes him to reel down quickly for another second. This gives the bass time to turn with the jig in its mouth. The pause, reel down and turn gives him a rock hard hookset nearly every time. This technique is very similar to waiting on a frog bite.

“I love a swim jig around stumps or transition areas where a creek channel winds through a flat or maybe comes in close to the bank,” Niggemeyer said.

When they fish around grass they will hit the points, cuts, holes in the grass and anywhere that a bass can ambush something passing by the cover. Grass is the best option for Lowen, but he also likes it around stumps, laydowns, rip rap, chunk rock banks. Niggemeyer has had big catches on completely barren looking banks, like off of ditches running through a flat or barren banks other anglers may just skip in a highly pressured tournament.

“I’ve caught swim jig bass off nearly every type of cover you can encounter and on banks completely void of cover,” Lowen said. “You can run it down a log and flutter it just like a spinnerbait and draw some awesome strikes.”

All four anglers fish only braid, mostly 30-pound braid or better. Lowen reaches for Spiderwire or Stren Braid while Niggemeyer prefers Tuff Line XP. They need power to horse on fish around cover, but they also want maximum castability with the swim jigs.

Lowen uses a 1/4 ounce D&L Swim Jig that he designed 90 percent of the time. Occasionally in really cold water he’ll use a 3/16 ounce D&L Baby Advantage jig. He likes to tip his jigs with one of three types of trailers – a do-nothing trailer, a flapping trailer and a curly leg trailer. For the do-nothing trailer he’ll thread aTightlines UV  Craw, for the flapping trailer he likes something like a NetBait Paca Craw and for the curl tails he likes Tightlines UV twin tail on it.

Howell prefers a Lunker Lure Skip and Swim jig that has the weight further bank on the shank with a smaller head to give the jig a narrow profile for slithering through dense cover easily. He usually tips it with a Yamamoto Single or Twin Tail Grub. He often uses a high contrast grub like white on a dark jig and vice versa to give the bait more flash in the water.

Horton on the other hand prefers a Dirty Jigs Swim Jig in 3/8 or 1/2 ounce because he feels that cover contact is critical and he doesn’t want his jig riding over the cover but instead crashing through it. He will thread a NetBait Kickin B Chunk on the jig for more turbulence and attraction.

Lowen uses a rod he’s designing with Castaway rods that he described as having a flipping backbone with a spinnerbait tip. It gives him a lot of accuracy on the cast but a lot of power to move fish out of cover too.  Niggemeyer opts for a St. Croix Legend Tournament Carolina-rig rod again with a stout back bone but some tip action for casting. All use the fastest baitcasters they can get because swim jig bass attack aggressively and you need to take up line fast on a strike.

All four anglers keep colors simple – Black and blue, bluegill and a shad pattern. One of those three colors will work at any given time.

But Lowen gave great advice on changing colors and trailers on the fly.

“I’ve learned through many years of throwing swim jigs that you can tell which part of the swim jig you have wrong, just by how the fish reacts to the lure,” Lowen said. “If they are following the jig but never attacking, your color is wrong. If they are coming up and bumping or nipping at the jig, your trailer action is wrong.”

It was hard for each angler to name a specific swim jig time where it bailed them out of a tournament situation.

“I can’t name one time where the swim jig saved me because I always have one tied on,” Lowen said. “It’s like Dean Rojas with his Spro Frog. I have so much confidence in my D&L Swim Jig that I don’t ever leave the dock without at least one tied on and when it’s my main pattern, I’ll have four or five swim jig rods rigged.

“I tell folks in my seminars, the easiest way to get good with a swim jig is to just fish it where you would fish a spinnerbait. But you’ll find that it comes through cover so well, that it can go places where spinnerbaits and chatterbaits can’t.” 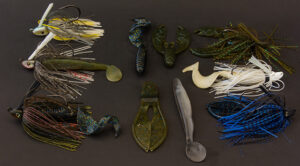