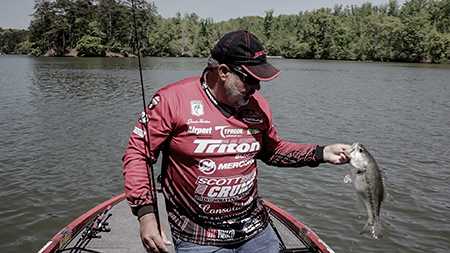 “I’ve got a good one right out here on the deeper edge,” said Jamie Horton. “These jokers just come off bed last week, I April fish on bed all in the pockets, everywhere. They are already starting to move out. This is the first week they got out on Guntersville. They move out here on these places, mostly 12-15 foot places. Some are post-spawn some are maybe pre-spawn. Sure is fat. He was right out here on the edge where’s he’s supposed to be. We just caught a 5 pounder when we pulled up that’s kind of up on the hump a little bit, pretty fish. That would be a small one for the Bassmaster Classic.

What we have got right here; we’ve got a big spawning flat that comes in here and makes a little turn that way and a turn back and opens up real big and then right here it goes behind the island. And we just kind of sit here in the fork of it and this is like the first hump that you come to that goes kind of like 8 down to 12 than like to 17. Coming out of there, these fish are using this place to stage. Going in, going out we just caught a 5 pounder and a 4 pounder and they both kind of looked like maybe they were pre-spawning fish. There’s a lot of fish on bed up on the shallows but it got pretty cool last night and this morning we didn’t see a lot of females, just a lot of males so we decided to drop back out here. This is the last week of April and it’s typically the first week that fish go to get deep on Guntersville. And most the time fish move toward the deeper water. The first thing they do is get unto deep places inside of coves and pockets, you know, protected kind of the first deep place on the way out. They usually stay here about a week or two, and then the shad go to spawning and they will feed up on the spawning shad and during the summer they usually move out on the deeper stuff where the more current is, current orientated and stuff.

We are just taking this crank bait and I like to reel it pretty fast because when the fish hits the bait, I like to be reeling it fast enough so that he gets it and I don’t do anything any different when the fish bites, I don’t change anything. I just keep a steady retrieve and just keep pressure on them and kind of lead him to the boat. You know I feel like if the fish, when he bites the bait and he really doesn’t know he’s hooked and you just kind of lead him to the boat, that you can kind of lead him all the way to the boat without him ever really fighting or jumping and stuff that much but if you put pressure on him and you go to pulling on him, he will go to fighting back and a lot of time he will tear off the hook on the crank bait so I just, I don’t ever do nothing different. When I get a bite I just keep reeling and just lead him to the boat. You can land more fish that way.

You can take the same fish, you can be fishing a place with a crankbait and reeling it fast like that, I made these fish jump a little bit but you can lead them to the boat on a limber rod like this and fish not really do much. You can throw a jig or a Carolina rig out there, catch the same fish, get a bite, set the hook and lay into him real hard and he’s going to pull back and you will think the fish is twice as big as what you’ve been catching and he may be smaller just because you made him fight so hard. But a crankbait, it’s best to just lead them to the boat.

We’re going to get out here at the end of this thing. The 2 bites we had were kind of up on the 8-12, kind of up on the top and it drops off right out here and we’re going to get out here just a little deeper and see if we can get another one to bite. We’ll go to a few more of these places instead these coves and pockets; very seldom do I ever just get onto one place if you catch them 8-12 inside of a cove or somewhere else where they are 8-12 inside of a cove too. You might find a place where they are stacked up a little better.