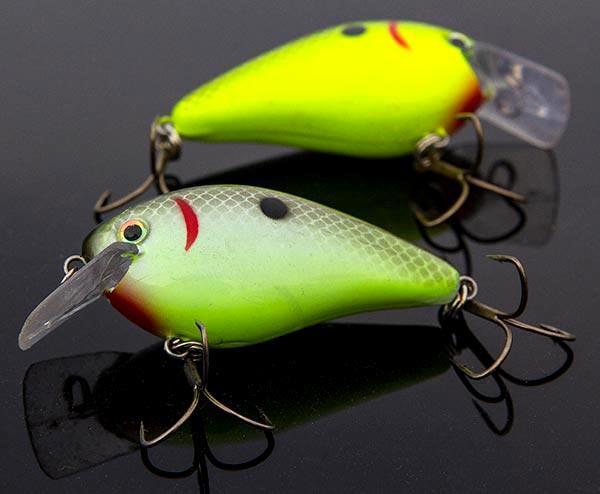 I fish a lot with a lot of anglers. I’ve seen a plethora of custom-painted crankbaits hidden in dark tackle boxes and trays or secret compartments in competitive fishing boats. We’re all looking for a little edge on the fish and more importantly the other anglers pursuing the same fish.

I myself have a bunch of custom painted crankbaits, topwaters, and jerkbaits. Partly because I want a unique bait. The other part is because I have a well-documented tackle addiction, to the point of being considered for the show “Hoarders.” I love to see my favorite baits with a shiny new coat.

I recently hopped in the truck with a fishing buddy, Chad Branham who fishes for Murray State and is an avid bass angler and tackle junky like me. A crankbait in his cup holder caught my eye. I could see it was a Strike King KVD Square Bill. But it had a paint job I didn’t recognize. I studied it for a time. I finally had to ask,” Who painted this?”

In fact the bait was painted. Originally it was painted in the Strike King factory, the classic chartreuse and black color. But after a couple months of careful planning, he ended up with a lightly muted chartreuse shad colored crankbait. I’ve seen a lot of crankbaits and for some reason this one really called out to me.  It was white on the side, chartreuse on the bottom, a lighter grayish black on the top with the red throat.

So what did he do to get this paint job in a couple months? He threw the crankbait up on the dash of his truck and let it sit. About once a week he would flip it and several other chartreuse crankbaits over, so he would achieve a fairly balanced change to his bait.

I’ve seen guys throw plastics together to make some better looking plastics. I’ve even heard of guys mixing plastics with crankbaits, although you can warp or induce some unsightly mold marks on a crankbait. But the sun trick has been used by a lot of guys to make their crankbaits a little more fish friendly.

“I learned it fishing on the BFL trail,” Branham said. “One of the guys I roomed with showed me some of the baits he ‘sunned’ and I was pretty blow away by a couple of them and how good they looked. So I started taking baits and putting them on my dash. My truck is perfect because my Ford actually has a tray on the dash. The baits sit right in it and don’t move around too much. “

Not all crankbaits “bleed” their color in the sun we’ve found either. So you’ll just have to experiment. But what you’ll end up with is a crankbait that’s more unique than when you first got it. And sometimes that can make a difference, especially on pressured fish or under different water clarities and conditions. Maybe a chartreuse crankbait appears too vividly in your fishery but a muted white and light chartreuse bait would look perfect to the bass. It’s all about the flash and flicker effect when talking about crankbaits, so we think it’s worth the time to bake a few baits.

Right now we’ve got six chartreuse crankbaits baking every day in a shallow box on the porch. Here are a few suggestions we found on sun baking your crankbaits:

1. Cut a small box about 1 inch deep to put the crankbaits in so they won’t be shaded at any angle.

2. Find the place at your house that gets maximum sunlight (works better in warmer months).

3. Remove the hooks from your crankbaits.

4. After several days, rotate the crankbaits to the other side to keep the fading consistent.

5. Be patient. It’s not going to happen in a week. It’s going to take several weeks to make an impact but you should end up with a pretty unique crankbait.

6. You can take the box with you and let it bake in the truck, on a boat deck, etc.

Editors Note: Be sure to follow manufacturer warnings on too much heat around plastic baits. Several baits don’t deal well with heat. I like to put my crankbaits out in an open box on the porch rather than in a truck that is like a pressure cooker. You just want to sun bleach them, not cook them so to speak. We’ve not had a bait yet have problems but others have reported baits that have expanded and cracked due to heat.