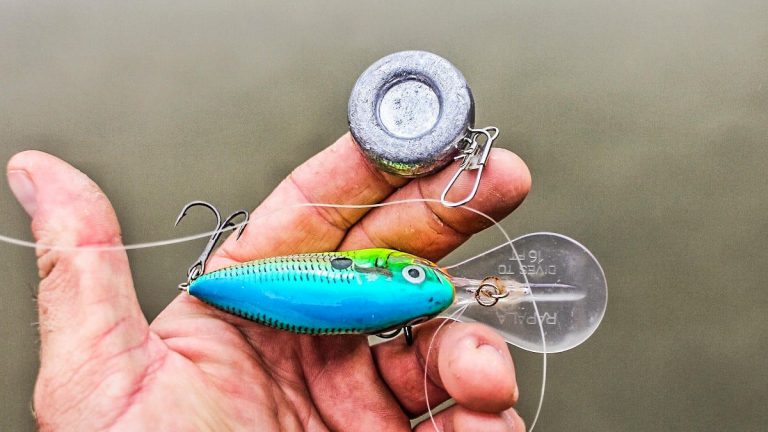 Backing up a bit since I started with somewhat of a rant, I realize some of you might not know what a plug knocker is or what it’s for. So please allow me to explain: Have you ever been fishing with a crankbait and become snagged just deep enough that you couldn’t reel your rod tip down to the bait to dislodge it? Well, that’s where a plug knocker comes in.

A plug knocker is a heavy object with a clip on it that you can clip around your line and drop down to your bait. You’ll want to hold your line semi-tight as the plug knocker falls and when it makes contact with your bait, let the line go limp for just a second. This initial contact will often dislodge or knock the plug loose.

If not, you can bounce your rod tip up and down, allowing the knocker to repeatedly pull down against the hooks and that will usually lead to a successful retrieval of the bait. There are times, however, where even that doesn’t work and you inevitably either have to give up and break your line or the line gets against some cover and the repetitive sawing motion does it for you… and then you’re out a bait and a plug knocker.

You can buy plug knockers now and they work really well. But I have made my own inexpensive plug knockers for years so I’m going to show you how to do that as well.

Talk about putting the plug in plug knocker… sorry, I couldn’t resist. But a lot of the old-school guys used to take spark plugs, slip a clip in the gap and then roll the gap shut. This works pretty well but the weight of it isn’t sufficient at times. However, it is the cheapest route provided you have a few old spark plugs hanging around.

All you need is a pack of clips with swivels; the Eagle Claw Crane Swivel with Coastlock Snap works well. Take the unoccupied end of the swivel and slide it into the gap of the spark plug then roll the gap shut. You can make a handful of these for less than a dollar if you already have the spark plugs.

The ones we typically prefer, however, are a good bit heavier. We buy heavy lead weights intended for catfishing or saltwater use and modify them. You can typically find something similar at most any tackle shop. The 2-ounce ones are probably sufficient and certainly a little cheaper. But if there are 3- or 4-ounce weights available, that’s what we usually go with.

The only issue with the heavier weights is that you don’t want to just start snatching on your bait once you drop a 4-ounce weight on it or else you’ll break your line pretty quickly. Instead, gently bounce the plug knocker and let the weight do the work. And if you’re using really light line, it is a good idea to have some lighter plug knockers on hand. But back to building them.

The weights we use are H&H Lure sinkers and we use these because they have an eyelet built in and they’re fairly smooth so as not to scuff up the line or snag on cover. All you need in addition to the weight is a clip that opens on both ends. Open the smaller end of the clip, run that through the eyelet on the weight and then snap it back shut. Now when you need to use the plug knocker, just unsnap the larger end and clip it around your line.

I’ve found a larger clip seems to work better than a smaller one. A smaller clip is more apt to tangle the line up when you let it go slack on the fall and that impairs the action of the plug knocker.

You want the weight of the plug knocker to pull straight back against the hooks. So for that to happen, the weight needs to go right to the eye of the bait and then pivot the bait down and away from the hook. That can’t happen if the clip tangles up a foot from the eye.

Also, when making your initial drop of the knocker, you want to be as vertical as possible. This way your knocker has a clear path to the bait and you will get the most force possible upon collision. If you were to attach the plug knocker to your line and release it from more of a horizontal position, the knocker won’t have near the speed when it reaches the bait or will likely collide with other cover before ever making it to the bait.

Having a plug knocker handy has probably saved me a few hundred bucks by now and quite a bit of cussing. But it’s those invaluable baits that really make you appreciate a good plug knocker when you need it. That one crankbait they’ve sanded the paint off of with their teeth. The one that has long since been blind in one eye, an eye lost in a great battle with a big one years ago. A crankbait that, though your not superstitious, you fully believe has the ability to get bit when others, seemingly just like it, can’t.

That’s the real value in having a plug knocker handy. You just ease up to the cover, drop it down and reel your bait back up. Otherwise, you’ll be standing there contemplating how deep you can swim in 45-degree water. Let me answer that for you… cut your losses. Better yet, just go ahead and put a few plug knockers in the boat right now before your hardheaded self is faced with that situation and you decide to take the plunge.