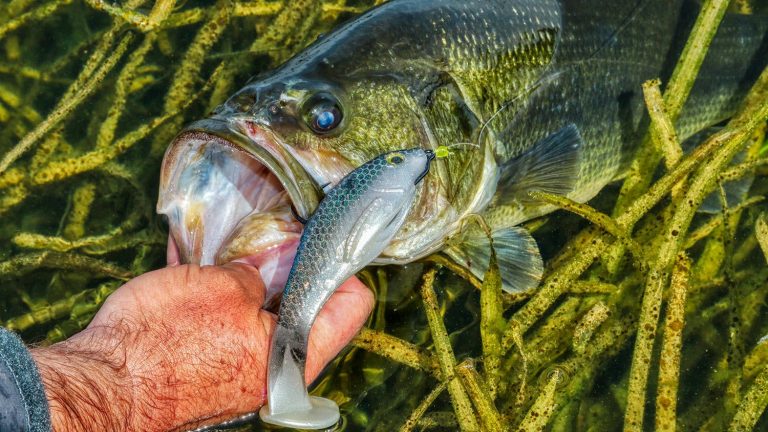 Fishing with swimbaits is not a one-size-fits-all premise in bass fishing. It’s not a one-design premise either. In fact, much like crankbait anglers, most good swimbait anglers prefer a system of specific swimbaits to meet their bass fishing needs.

“Fishing pressure, water clarity and water temperature influence which swimbait I throw,” said Tennessee pro Michael Neal. “In heavy pressure, I want something that doesn’t have an over-exaggerated action. You also don’t want a lot of action in clear water.

“In the cleaner water, you want smaller swimbaits, but in dirty water, I tend to go bigger and one with a little more action to create a disturbance. As far as temperature, the baitfish tend to be smaller in the winter, so I usually throw smaller baits and more subtle in colder water and bigger baits in warmer water.”

Big Bite Baits offers a variety of swimbait styles that Neal relies on, each with multiple sizes, which equip him for whatever scenario he faces. Here’s the rundown of his swimbait squad. 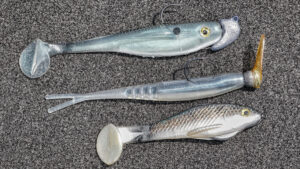 With sizes ranging from 3 1/2- to 7-inches, the Suicide Shad is a slender bait built for a tight wobble. Neal rigs his Suicide Shads on jigheads with weights appropriate for each bait size and the depth he’s fishing.

Calling this a year-round bait, Neal matches the size to the seasonal bait dimensions of threadfin or gizzard shad. He uses the 5-inch Suicide Shad from August through October, drops down to the 3 1/2 for November-February, returns to the 5-inch for the prespawn of March-early April and then goes big on the ledges with the 7-incher for late April-July.

“For the offshore stuff, you let it hit the bottom, reel six or eight times, let it go back down and repeat all the way back to the boat,” Neal said of his basic retrieve. “Just make sure you’re following the contour of the lake.

“With the 3 1/2- and 5-inch, I don’t fish it on the bottom; I use those more for suspended fish or fishing around grass.”

Okay, it’s not technically a swimbait, but the way Neal rigs and fishes a Jointed Jerk Minnow makes it a good fit for the premise. He fits the Jointed Jerk Minnow on a scrounger head, which moves a bunch of water and complements this bait’s action-heavy design.

Fall to early spring find him using the seasonably applicable 3 3/4-inch bait, while he regards the 7-incher as a summertime big-fish getter. He’ll often alternate between the Suicide Shad and this scrounger setup to determine the day’s preference.

“When the water’s cold, I like to fish that 3 3/4-inch version on the scrounger the same way a lot of guys use a Fish Head Spin in a blueback herring lake,” Neal said. “Or, I’ll use it for suspended fish on points and bluffs, just like you’d throw a small 3- to 4-inch swimbait.

“The Jointed Jerk Minnow is a really great bait for that because it doesn’t have a big tail, so it doesn’t ride up a lot. You can throw it out there, figure out your fall rate and count it down to the depth the fish are in.”

The BB Kicker’s thinner aft section ending in an extra-thick boot tail yields big-time motion, which Neal harnesses for a classic swimbait presentation and one that fuses another popular bait style. Favoring the 4 1/2-inch BB Kicker below dams and in current seams in the cooler water of late fall-winter. However, he says this bait is no one-trick-pony.

“I like this bait around cover or anywhere the water’s 5 feet or less,” Neal said. “This is primarily a big-fish bait for me and I throw the 5 1/2-inch bait a lot in March and April around the prespawn and early spawn and present it like a lipless crankbait.

Neal rigs his BB Kickers on 5/0-7/0 Gamakatsu belly-weighted hooks, which allow him to fish through stumps, brush, laydowns and grass without worrying about snags. This is particularly beneficial for one of his favorite fall tactics gurgling the bait right at the surface; something like a buzzbait, with head-turning action and big bubble trails.

In closing, Neal notes that he throws all of his swimbaits on a 7-foot, 6-inch Denali heavy swimbait rod with a 6.4:1 Daiwa Tatula 150 or 200 holding 20-pound Sunline Sniper. This setup allows the long casts he needs and equips him to pour the coals to a big fish but, only after a prudent hook set.

“The number one thing is don’t jerk,” Neal said. “With a lot of anglers, as soon as they feel a bite, they want to jerk the bait to set the hook. I try as hard as I can to keep the same retrieve speed until I feel my rod loading up to know that the fish has it.

“A lot of times, they’ll cat-and-mouse that swimbait and they won’t actually get it until they hit it a second or third time. So, don’t jerk until your rod actually starts loading up.” 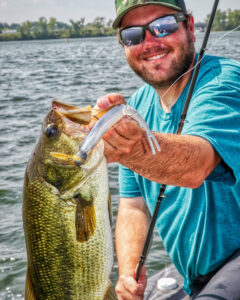