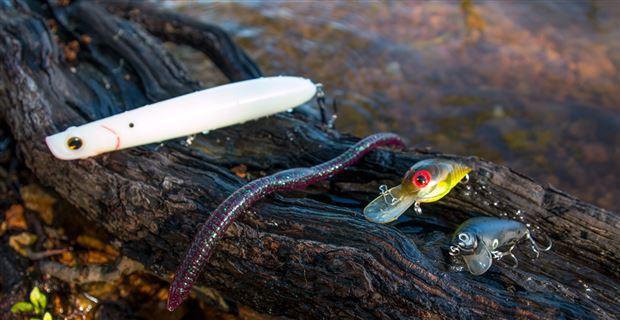 A side effect of hailing from a place where an igloo is considered acceptable housing, and the ice fishing season extends into May, is that you tend to spend a lot of time each winter following tournaments. Starting with the earliest AAA events in Florida each January, following the early tour season is a way to escape Jack Frost not only nipping at your toes —but actively chewing them off.

If you’ve spent as much time as I have studying tournament results from every major event across the country, you quickly notice that tournaments in specific regions of the country are consistently won on the same (or similar) unique patterns year after year.

Usually those patterns are seasonal, like “throw jerkbaits in the early spring when the water is cold” type deals. Sometimes though, those winning tournament patterns are the result of a specific bait, color, or presentation being particularly effective on bass in those waters.

Observing the frequent success of certain “local favorites” got me thinking about how many there really are, and wondering what it is about specific water types that make a specific color or pattern truly excel.

The following is just a small sample of unique lake or regional bait patterns – hopefully it will help you understand how and why certain presentations have earned their reputations as local favorites. 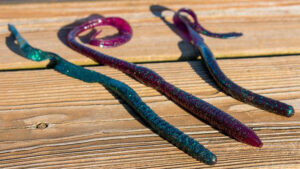 You read enough tournament results from Florida tournaments, and it doesn’t take long to realize that junebug is a pretty effective color down there. FLW Tour and 2006 Bassmaster Classic champion Luke Clausen has experienced it first hand. He won his Classic title by pitching a junebug worm around clumps of pads – and set the single day Bassmaster Classic weight record of 29 pounds, 6 ounces along the way.

To Clausen, the effectiveness of junebug doesn’t really have anything to do specifically with Florida, instead it has to do with how junebug shows up in tannic water; which is not coincidentally the most common water color in Florida.

“Junebug is the green pumpkin of tannic water,” he said. “Most of the lakes and rivers in Florida have a heavy tannic stain that turns the water almost the color of coffee. It still might be clear, but it’s really stained. To you or me, junebug is purple with green flake. Put it on a hook and drop it in some tannic water, it shows up as a greyish green, which I believe looks really natural to bass. So really, it’s the tannic water in Florida that makes junebug so good, and I’ll actually throw it anywhere the water has a tannic stain, not just in Florida.” 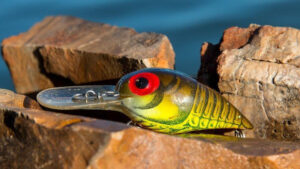 Wiggle Warts in the Ozarks

There’s a long list of baits that have become eBay sensations when they are hard to get. Anglers were paying upwards of $100 for original Chatterbaits and $20 for a pack of Basstrix swimbaits when each first came out. The original eBay sensation is the pre-Rapala Storm Wiggle Wart. Some 15 years after they were discontinued, top colors still fetch more than $40 each on eBay. The reason for the original Wiggle Wart’s timeless success is simple; it’s just about all you need to be throwing in the spring and fall on the storied White River lakes of Missouri and Arkansas.

FLW Tour pro Greg Bohannan has won a lot of money on lakes like Table Rock, Bull Shoals and Lake of the Ozarks. He’s compiled more than 10 top-10 finishes since 2007 on White River impoundments, and many of them were accomplished throwing an old Wiggle Wart.

Being true highland reservoirs, the Ozarks lakes and have an abundance of unique rock, which Bohannan thinks is the key to the Wiggle Wart’s success.

“I think there is just something kind of unique about the type of rock we have on the White River,” he said. “Our rocks seem more jagged and on steeper banks than anywhere else in the country. The Wiggle Wart dives at a very steep angle and it digs hard after it deflects, which is something that few other crankbaits do.

“Bass in the Ozarks like to get down in the cracks and crevasses, and when a Wiggle Wart comes over a rock, it digs right down into the next crevasse. With a lot of other crankbaits, the hit the rock and skip over or glide past the next crevasse and the bass never gets it. Wiggle Warts are almost like jigs in the sense that if you wind them slow; you’re going to maintain contact with the bottom the entire retrieve.”

The effectiveness of the Wiggle Wart in the Ozarks has not only resulted in their sky high prices on eBay, it’s also caused Bohannan to work with local tackle manufacturer Skirmish Baits to develop the A-10, a crankbait designed to hunt through rocks in a similar manner to the Wiggle Wart, and give anglers a contemporarily produced option that capitalizes on the same bite. Similarly, SPRO released the RK Crawler this year to also produce that same rock crawling behavior. But even these new offerings likely won’t curb the demand for the old regional gem. 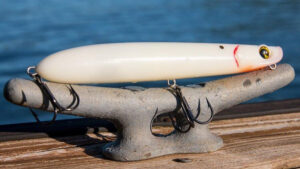 Originally designed as a lure to target big striped bass and near-shore saltwater species, the pencil popper is a large, 5 to 7-inch topwater bait that combines the walk-the-dog action of a topwater stick bait with the splash of a chugger. Pencil poppers have a large profile and create a tremendous disturbance on the surface. They are also the hot ticket right now on the blueback herring-infested lakes of the Carolinas and Georgia.

Aside from the round goby’s invasion of the Great Lakes, there hasn’t been an exotic species that impacted bass fisheries as much as the blueback herring has to the famed impoundments of the Carolinas. For much of the year on lakes like Murray, Hartwell and Lanier, if you’re not fishing around bluebacks, you’re probably not around bass.

To FLW Tour pro Michael Murphy, the reason for the pencil popper’s effectiveness on blueback lakes isn’t because they necessarily look like a blueback herring, but rather that they have the ability to draw strikes from deeply suspended bass, a common occurrence on blueback lakes.

“Bass in blueback lakes are ready to feed on the surface under any conditions,” he said. “Unlike shad, bluebacks travel on the surface all the time. It might be the middle of the day and they’ll be schooled up on the surface over 40 feet of water. The bass don’t like to be up that high though, so they might be hanging 20 feet down suspended over structure. If you throw a spook or a popper, those bass won’t even see or hear your bait.

“A big pencil popper makes enough commotion that they can see it from way down deep. Once they get to the top, they’re already committed to feed, so they don’t care that it’s such a big bait. It’s common to catch 10-inch bass on a 7-inch pencil popper around here.” 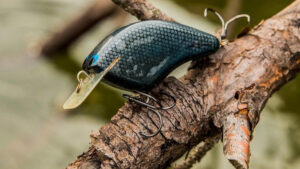 Black crankbaits on the Arkansas

In today’s tackle shops, you can find crankbaits in a myriad of colors, designed to mimic everything from bluegill, trout, shad, perch, even exotics like ayu and hitch. Interestingly though, despite the hundreds of crankbait color choices, many anglers on river systems in the Arkansas/Red River corridor take a sharpie to those fancy color schemes—creating an entirely black crankbait.

Former Elite Series angler Clark Reehm was quick to pick up on that trend during the period that he lived in Arkansas, and rode a sharpie’d black square bill to a 22nd place finish in 2011, the last time the Elite Series fished the Arkansas River – and he would have had a top 12 if he wouldn’t have been with a group of anglers that got locked out on day 3.

“My number one response when someone asks why a black crankbait is to say ‘why not’,” Reehm said. “We throw black jigs, black spinnerbaits, and black plastics all the time. Black is just an excellent color any time the water is dirty. It creates contrast and gives the bass something to target in the murk. Places like the Arkansas River, the Red River, and others in that region are known for being pretty dirty all year, so it makes sense that black crankbaits catch a lot of fish there. Although it’s most famous on the Arkansas, I actually think black is an excellent crankbait color on any river system. I’ve also caught them on black crankbaits on eastern rivers and the Upper Mississippi.”

Obviously these aren’t all the regional staples. We know green on the TVA lakes, Gobies on Lake Erie, trout swimbaits out west, and many others have become staples in these regions and spread across the nation. You know they are staples when big tournaments roll into the region and all the competitors are clamoring for the same lures.