As the stellar bass fishing action of the spring months comes to an end, the transition between spring and summer can be a frustrating and, quite honestly, disheartening time for anglers. The bass are constantly moving, theyâ€™re hard to pinpoint and the unpredictable weather patterns donâ€™t do us any favors, either.

Thankfully, however, lipless crankbaits serve as a major source of hope throughout this awkward time of year. These age-old lures may not look very fancy, but Elite Series pro Shaw Grigsby believes theyâ€™re a tremendous equalizer when youâ€™re fighting the battle against stubborn summer bass.

Throughout his career, he has frequently relied on 5 lipless cranking hotspots that many anglers tend to overlook. Regardless of the fishery or the mood of the bass, these areas have bailed him out of some tough situations and even led to some monstrous 30-pound limits.

Before we discuss the particular locations, letâ€™s quickly delve into a few important variables that will help you maximize your success with these lures.

As the name implies, lipless crankbaits lack the diving bills found on the front of traditional diving crankbaits. This important omission allows anglers to target both shallow and deep water by utilizing simple retrieve variations.

â€œOnce the bass are done spawning, a lipless crankbait becomes a major player throughout the entire summer,â€ Grigsby said. â€œBass become hugely focused on shad as theyâ€™re refueling and recovering from a rigorous spawning season and these lures are incredible shad imitators. More importantly, however, a lipless bait gives you the ability to control your depth easily without constantly switching lures.â€

While standard crankbaits can be productive this season, their diving bills can significantly limit an anglerâ€™s ability to cover multiple depth zones in a single cast. Because these crankbaits are designed to run at specific depths, efficiency can become an issueâ€”especially when the bass are scattered throughout the water column.

â€œWhen bass are making their way from their spawning grounds, thereâ€™s a good chance youâ€™ll find them in a variety of depth zones,â€ Grigsby said. â€œWith a lipless crankbait, I can target shallow fish in just a few feet of water and motor down the bank and cast to â€˜em in 15 or 20 feet of water. Depth control and versatility are huge factors this time of year.â€

In order to control the depth of his lipless crankbait, Grigsby relies on three particular retrieves.

To a non-angler, buying fishing tackle may seem like a fairly simple endeavor. But to â€œfish headsâ€ like us, itâ€™s anything but easy. With endless models from which to choose, it can actually become a bit overwhelming. Can a bass really tell the difference between a 2-inch lure and a 2 1/4-inch lure? Theyâ€™re not really that smart, are they?

A look inside of Grigsbyâ€™s lipless crankbait selection would likely surprise you. Although youâ€™d expect to find endless shapes and sizes in a professional anglerâ€™s arsenal, his Strike King Red Eye Shad collection focuses on three particular sizes.

Much like choosing lipless crankbait sizes, color selection can also seem a bit daunting at times. But to continue with Grigsbyâ€™s theory of simplicity, he believes these 4 color patterns to be most productive this time of year.

A bassâ€™ natural post-spawn progression is almost identical to its prespawn journeyâ€”except in reverse order. When the big females conclude their spawning activities, theyâ€™ll use the first depth change adjacent to a spawning flat to both recover and feed.

â€œWhen I find these â€˜first dropsâ€™, as I call them, I generally postition my boat in deeper water,â€ Grigsby said. â€œSo if it drops from 5 to 15 feet, my boat will be sitting in 15 feet of water where the bottom begins to flatten out and Iâ€™ll cast into the shallow water while keeping constant bottom contact. But donâ€™t hesitate to reverse that. Although it can cause more hang-ups as youâ€™re pulling the lure towards shallower water, this can allow you to cover a larger depth range. Essentially, youâ€™re ambushing those finicky females by putting your lipless bait in every available depth zone along that flat.â€

Throughout the spring and summer months, thereâ€™s often a lot of talkâ€”and debateâ€”revolving around targeting secondary and primary points. While Grigsby wholeheartedly believes points to be high-percentage targets, he doesnâ€™t discriminate between the two types.

â€œPoints give the bass quick and easy access to deep water,â€ Grigsby said. â€œAnd current washes current across the point, which serves as a virtual buffet for hungry post-spawners. But I focus more on points adjacent to spawning flats, which can be both secondary and primary points, so I donâ€™t get too hung-up on their categorization.â€

When fishing these points, he suggests staying in deeper water while casting towards the shallower water found on top of the point. Because bass tend to move up and down on these points throughout the day, Grigsby believes this approach is an effective way to tell the most operative depth on a given day.

â€œAnother cool way to figure out with depth range to target on points is to pay close attention to your electronics after you launch your boat,â€ Grigsby said. â€œI immediately turn on my Lowrance GenIII Touch unit and identify where the baitfish are. When you find them in a certain zone, thatâ€™s where you need to concentrate your efforts all day long. If you put your lipless crankbait in the same depth zone as the bait, youâ€™ll catch â€˜em.â€

Hotspot No. 3: Drains and ditches in flats

It doesnâ€™t often take much to attract a bass and thatâ€™s certainly the key with this particular lipless hotspot. If youâ€™re able to find a small drainâ€”also referred to as a ditchâ€”in some sort of shallow-water flat, thereâ€™s a great chance of finding a big concentration of bass.

â€œMan, these bass will get into some of the tiniest ditches and absolutely stack up,â€ Grigsby said. â€œTheyâ€™re highways to and from shallow water, but theyâ€™re also emergency exits. We often forget that bass are big-time prey to birds such as eagles and ospreys, so when they see one of those dudes hovering over their heads, theyâ€™ll jump in these ditches and use â€˜em as an escape route.â€ 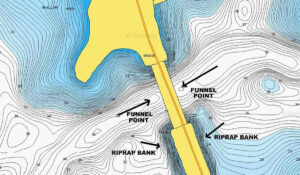 Riprap is often an overlooked sanctuary for late-spring and summer bass and immediately following the post-spawn period, these rock-filled banks are made even better by early morning shad spawns.

Furthermore, riprap banks are frequently found on bridges and causeways, which act as natural funnel points to and from deep water. In other words, if a bridge intersects a particular creek, bass have no choice but to pass through these areas when migrating. As you can guess, this can lead to incredible numbers of bass and excellent fishing action.

â€œYou hear a lot of anglers talking about squarebill crankbaits on riprap,â€ Grigsby said. â€œBut I actually really like lipless crankbaits in these areas, too. You do, however, have to be on top of your game to ensure you donâ€™t get snagged. If you have to take a long time to switch hands before you engage your reel, your lure will be in the rocks before you even start your retrieve. The key is very similar to buzzbait fishingâ€”you need to start your retrieve when that lipless is about 6 inches from landing in the water so you can get it going above the rocks from the get-go.â€ 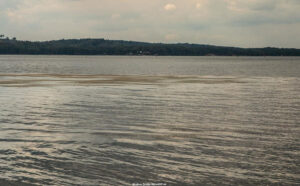 â€œItâ€™s tempting to get dialed-in on hard cover such as rocks, concrete and boat docks when weâ€™re looking for a shad spawn,â€ Grigsby said. â€œBut never overlook these grass lines because they can be absolutely rockinâ€™ this time of year. Also, they serve as an all-important edge for bass as they travel throughout the day. Bass can be insecure little creatures, so they prefer to follow a natural edge as they move to and from deeper water.â€

To maximize his efficiency when fishing these lines, Grigsby makes a concerted effort to parallel the edges with his lipless crankbait. Perpendicular casts will only put your lure in the strike zone for a few turns of the reel handle, while parallel casts ensure your bait stays in â€œthe zoneâ€ for as long as possible.

â€œLike we talked about earlier, this is when Iâ€™m going to tick the grass with my lure,â€ Grigsby said. â€œIâ€™ll burn it across the tops of any irregular grass stalks and right as I feel it try to bury in that vegetation, Iâ€™ll quickly rip my rod tip upward to free the lure. This quick jerk is often when some of your best strikes occur.â€

When the bass fishing action starts to slow in your area this season, donâ€™t get discouraged. Tie on a lipless crankbait, cover water and locate these hotspotsâ€”youâ€™ll be surprised by how much fun it can be.