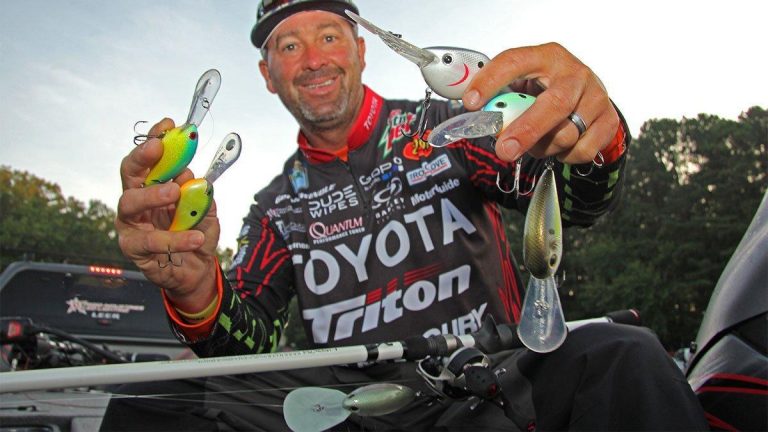 An open storage tray near Gerald Swindle’s rod locker just prior to Day Two of BASSfest represented a virtual who’s who of the deep-diving crankbait universe.

Fact is, scan the rod lockers and front decks of nearly every boat at BASSfest, and you’ll see much the sameâ€”lots of long plastic lips designed to escort diving treble-hooked plugs to depths of 20 feet or more.

â€œI’ve got at least four different styles rigged and ready all day,â€ said Swindle, who cranked up a nice 20-pound limit on day one from Kentucky Lake. â€œI’ve got bold colors, natural colors, plugs with rattles and some that are silentâ€”and every one of them will hunt down there in that 20-foot zone.â€

â€œBecause after my boy VanDam has peppered a school, you gotta have something sorta subtle to convince â€˜em it’s safe to eat again.â€

Don’t be fooled by Swindle’s humor, however. He hasn’t won nearly $2 million without a serious plan. Each component of his cranking setup is part of a planned system from which all anglers can learn.

â€œI’m using a 7-foot, 10-inch Quantum Accurist that was actually designed as a flippin’ stick, but it’s got enough length to launch these big plugs to get the longest cast possible, plus enough backbone to handle the weight of a 3-ounce lure like a lotta these are,â€ Swindle said. â€œAnd it’s got a soft enough tip to allow the fish to eat the bait the way you need â€˜em to, so they stay hooked.â€

â€œI’m using an EXO 200, not only because it’s light and comfortable, but mostly because it has a big spool to hold plenty of line for long casts,â€ Swindle said. â€œA lot of anglers don’t understand the importance of spool size on a baitcaster. A lot of reels today are built to be lightweight and compact, but that sacrifices spool size, and you can’t get enough line on a 100 size spool to make the long casts these big crankbaits call for. You can literally cast all the line off a 100 size reelâ€”and hey, let’s face it, nobody likes a naked spool.â€

â€œI’m running 12-pound Sunline Fluorocarbon on a lot of these crankbaits, but when I use the giant Strike King 10XD, I pair it with 14-pound because it’s so big and heavy you’ll risk breaking the line as you snap to cast it with anything less.â€