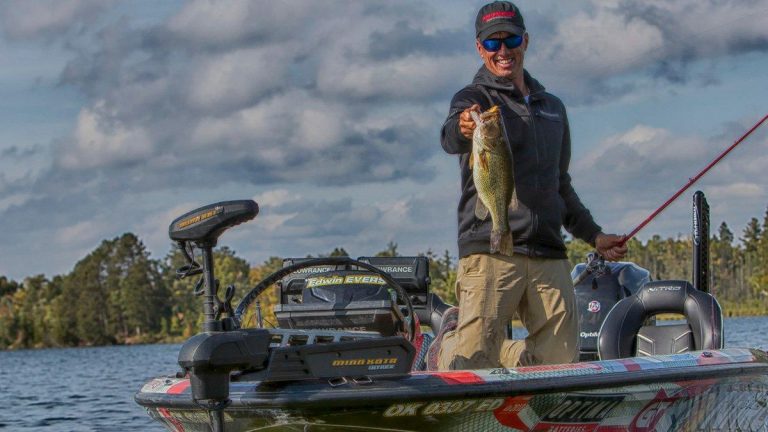 Edwin Evers, the 2016 Bassmaster Classic champion, hails from Oklahoma, which is decidedly jig country, and about 1,400 miles east of swimbait central. Nevertheless, he’s experimented extensively as swimbaiting culture has vaulted into the mainstream of the tournament scene, and while the big “tennis shoe” sized baits don’t consistently play a big role in everyday tournament fishing on the national trails, the more “bite-sized” lures increasingly place anglers in the winner’s circle.

Nevertheless, you should forgive Evers a bit if he reverts to his jig fishing roots as a default. After all, a finesse jig was a key player in his Classic win on Grand Lake, and a jig will produce from coast to coast during the entirety of the fishing season, in water of all depths. So when he first got the Megabass Dark Sleeper late this season, where others saw a heavyweight paddle tail swimbait designed to swim along the bottom, Evers saw something that could be crept, hopped, and worked like a traditional jig.

“When you look at it, it looks like a jig,” he said of the soft plastic swimbait, which comes in 3-inch sizes of 3/8, 1/2 and 3/4-ounce, as well as a 1 ounce 3.8-inch bottom bouncer. All of them feature a weight that provides a low center of gravity and a top hook. Indeed, the offshore jigging game has expanded greatly in recent years. Fresh on the heels of the popularization of the football jig came the introduction of articulated jigheads like the Biffle Head. This evolution makes sense, because while a football jig will continue to work as long as there are bass to be caught, these other presentations offer a more natural replica of forage, especially in clear water. “It’s really awesome for hook-wary fish. With a football jig, I believe that they sometimes notice that there’s a hook, especially smallmouths, which tend to follow a lure. The Dark Sleeper has a tall fin that hides the hook and at the same time makes it completely weedless.”

So far Evers has primarily used the 1/2-ounce version in depths up to 15 feet, because it “doesn’t get too bogged down,” allowing him to work transition areas without getting lost in the weeds. But, he can see applications for the heavier versions in water much deeper than that, firmly encroaching upon jig territory. However, one key distinction that sets the Dark Sleeper apart from traditional football jigs, is its uncanny ability to come through rock, timber, and weeds, making the Dark Sleeper a one-stop-shop for targeting transition areas in deeper waters.

Evers started experimenting with it during the 2017 Elite Series northern swing, first on a gin-clear lake loaded with big smallmouths which were finicky when it came to other baits. When he pulled out the swimbait, though, they pounced. Then he took it to the season-ending Angler of the Year Championship on Mille Lacs, where the water was a little more stained, and it turned out to be “one of my key baits.” He made long casts, let the lure sink to the bottom, and “just kind of dragged it back” across and over many of the lake’s big boulders and rocks. 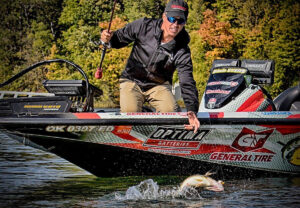 Another advantage of a compact, heavyweight swimbait over a football jig is that many times it never hits bottom. Whereas a jig is relatively lifeless on a long plummet into the depths, as the swimbait drops “the tail kicks with just the slightest movement. Overall, it’s just more realistic.” He fishes it on a 7’4″ medium heavy rod with 12 to 17 lb. test fluorocarbon, as determined by the size of the fish, the clarity of the water, and the harshness of the cover. A high speed reel is also critical. Combined with the long rod it allows him to take up slack in a hurry, especially when fish bite on the fall or at the end of a long cast. Even though the lure is technically a swimbait, he sets the hook hard, as if it were a jig.

While the Dark Sleeper comes in a variety of colors, so far Evers has focused in on three, to replicate the dominant forage on different waterways. He likes Donko to replicate crawfish and Haze to imitate perch and bluegill, but he’s confident that it’s “not just a perch and crawdad deal.” Accordingly, he’s also obtained a number of them in the Shirauo color to imitate shad. That’ll come in handy next summer on lakes like Kentucky Lake, where “stroking a jig” â€“ making long, hard hops off the ledges â€“ is a staple. Evers believes this option might be even better, since it maintains a seductive action and displaces water not just through the pull, but also as it plummets back to the bottom.

Indeed, of all of the new techniques he’s tried in recent years, this one has him more excited than any other: “I don’t want to put it in a box just yet,” he said. “It’s like a spinnerbait because it’s so weedless, but you can also skip it under docks phenomenally. Let it fall on a free line and that tail will be getting it. And you can fish it in heavy grass, unlike a football jig, which tends to get hung up. As far as I’m concerned, the sky is the limit.”