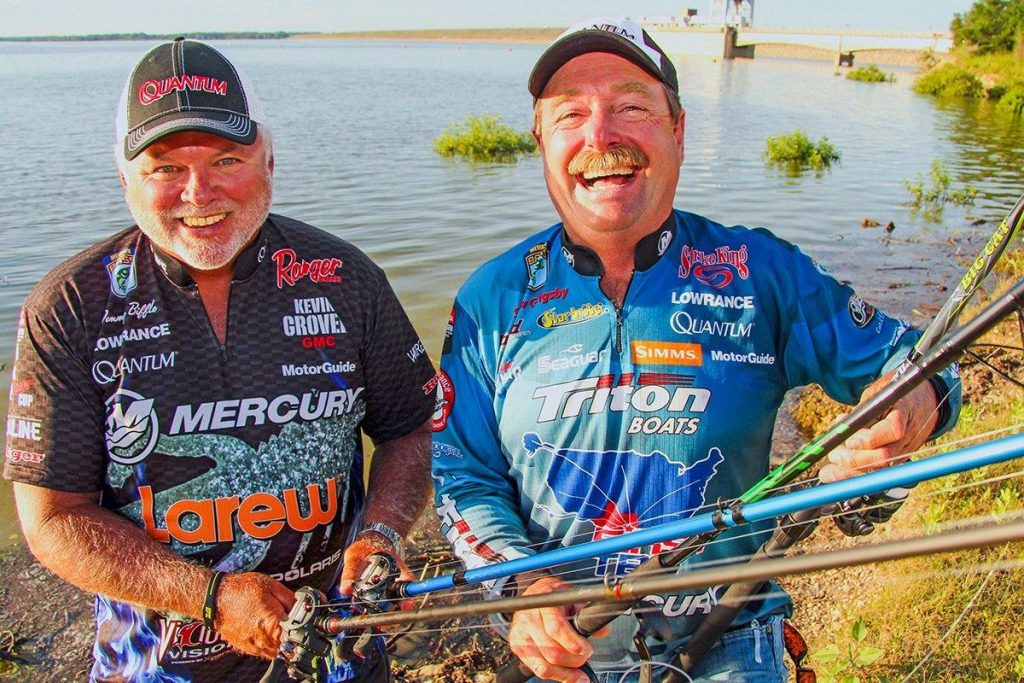 The water is high for GEICO BASSfest at Lake Texoma, but it’s nothing bass fishing icons Tommy Biffle and Shaw Grigsby haven’t seen before during their illustrious careers. Both laughed in good spirits, and talked of their expectations for Texoma on the eve to the start of competition.

There’s been a ton of talk, and several social media posts, about the high muddy water during the official practice period.

Is this the worst water conditions you’ve ever seen in your pro career?

Grigsby: Heck no, this isn’t the worst. There was a B.A.S.S. SuperStars event in the early 1990s out of Peoria, Illinois that was a total flooded mess. And I won a tournament on Sam Rayburn when the water was so high that I was ducking under power lines on telephone poles to get to my fish. Launching to practice here really wasn’t a huge deal. We’ll be fine.

Grigsby: A Texas-rigged Rage Bug, a 5XD crankbait, a Strike King coffee tube to pitch with, and a big sqaurebill crankbait called the Strike King 8.0.

How much weight will you have to catch each day to assure yourself the chance to make the final cut and compete on Sunday?

Biffle: I don’t know. I haven’t touched a bass over 2-pounds in practice, but I haven’t jerked on everything that bit either.

What’s the weirdest thing you’ve cast a lure to in practice?

Grigsby: Well, right now, this lake has drive-up trash cans for bass fisherman. Picnic areas are flooded, so you can just idle up next to a trash can if you want.

What’s the best meal you’ve had since you’ve been in the Durant, Oklahoma or Denison, Texas area this week?

Grigsby: Sushi from Papa Sam in Denison, Texas. I loaded up for around $10, and still had some left for my lunch the next day.