When the buzzbait was first developed, many anglers actually considered it too effective and believed it to be unfair for tournament fishing. The bass had never seen anything like it and folks were amazed by the giant blowups the lure produced. These days, however, the buzzbait is quickly becoming overlooked and underutilized due to the influx of newer, flashier and trendier lures within the industry. Although it may have been pushed out of the bass fishing limelight, the buzzbait still catches giant bass.

Strike King pro Mark Menendez has caught giant bass all over the country on buzzbaits and is a huge believer in their ability to catch trophy bass. In order to further increase his effectiveness with them, he has developed 6 simple tweaks that will help you catch more buzzbait bass.

Whenever we buy buzzbaits, the large majority of them are adorned with big, bulky skirts. Although these skirts are meant to emulate bait, their large profile can actually be a major turnoff to big bass. 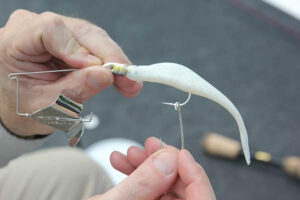 “Anytime I’m around active or schooling bass, I ditch the skirt and put a Strike King 3X ElazTech Z Too in its place,” Menendez said. “It changes the silhouette of the buzzbait and perfectly mimics the natural profile of a shad. It may be unorthodox, but they will absolutely choke it.”

When Menendez makes this change, he likes to vary his retrieve speed for added action. He begins his retrieve slowly to achieve a “plop, plop” sound and sporadically speeds it up for a few crank to turn the Z Too on its side.

“When you really wind on it for a few cranks, it’s a perfect imitation of a dying shad,” Menendez said. “If you’re tired of getting a lot of short strikes on buzzbaits, this can definitely help you solve the problem.” 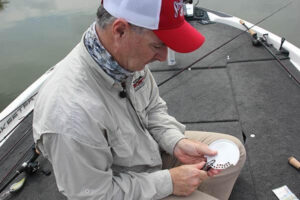 Lost trailer hooks plague even the most steadfast buzzbait anglers but Menendez looks to plastic household container lids to keep his trailer hooks in place. Whether it’s a coffee, sour cream or French onion dip lid, he’s had outstanding results with them all. Best of all, all you need is a cheap hole punch.

“Never in 30 years have I had a trailer hook come off while doing this,” Menendez said. “You’ll actually have to cut the plastic off to change hooks. This trick also promotes a free-swinging trailer hook, which I’m a big believer in. Bass can push a stationary trailer hook out of the way when they strike, so this gives me a much better hookup ratio.”

As if buzzbaits didn’t already catch huge bass, Menendez has found a way to further increase his chances of getting a 4 to 6-pound bite. Two quick modifications enable him to slow his retrieve and appeal to bigger bass.

“If you’re looking for a big bite, pull the wire open to make the head hang lower in the water and open the cup on the blade,” Menendez said. “It only takes a few seconds and it slows the bait down because it creates a lot more drag in the water. You won’t have a ton of bites this way, but when you do, it will most likely be a giant.”

Many anglers have very different opinions when it comes to buzzbait line selection, but Menendez has found heavy monofilament to be an outstanding choice for two primary reasons.

“I have a bad habit of setting the hook too quickly on a buzzbait and 20-pound Seaguar Senshi Monofilament Line gives me a little bit of lag time and results in better hookups,” Menendez said. “It also creates more drag, allowing me to slow my presentation when the bite is slower.”

When selecting a buzzbait rod, Menendez looks for one that allows him to make long casts and pull big bass out of very thick cover.

“I’ve been using  7-foot, 2-inch medium-heavy Lew’s Team Casting Rod for my buzzbaits and it has a ton of strength and makes accurate, long casts a breeze,” Menendez said. “I team it up with a 6.4:1 Lew’s Team Gold Speed Spool Casting Reel and I really believe it creates the perfect buzzbait rig.”

5. Find a buzzbait with gears

All too often, anglers will simply chunk a buzzbait as far as they can and reel it in without any thought to cadence or retrieve speed. Menendez, however, believes ignoring these factors makes it very easy to overpower bass, especially in sunny conditions. For this reason, he often uses a buzzbait that allows him to present it in a manner appropriate for the conditions.

“A Strike King Tri-Wing Mini Buzz King gives me everything I could ever want in a buzzbait,” Menendez said. “It has two gearsâ€”a very fast speed that’s great for active fish and an extremely slow speed that’s outstanding for inactive fish in sunny conditions. With this particular buzzbait, I’ll use a 4-inch white Strike King Rage Tail Grub and it’s a complete, flat water presentation.”

Bass are social creatures and it’s not uncommon for them to group up on the same shallow cover. As a result, Menendez always makes repetitive casts.

“If you do this over a year’s time, you’ll catch 10 to 15 extra bass, which is a huge deal to tournament anglers,” Menendez said. “Even if you don’t catch one on the first cast, make a follow up cast. When a big bass gets into thick cover, your first cast may just get its attention and prompt it to move toward the edge of the cover. That second cast might actually make him eat it.”

This is the time of year when buzzbait fishing starts to shine, and these 6 simple tips will help you gain more confidence in a hugely overlooked technique. As the forage gets bigger this year, knock the dust off of your favorite buzzbait and you’ll enjoy the results. 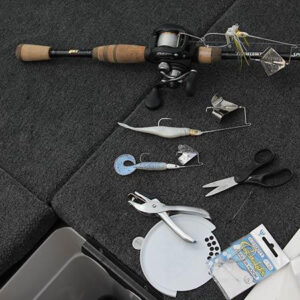