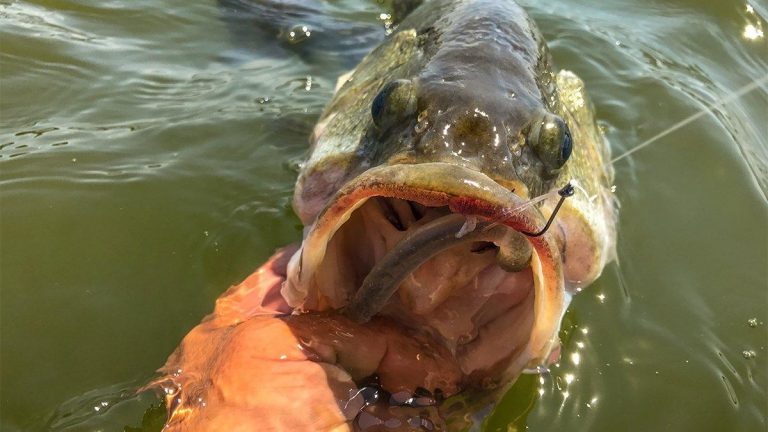 I’ve been fishing the wacky rig for many years, but the last few years in particular have really opened my eyes to its seasonal versatility and effectiveness. What I used to consider a spring-only technique has quickly turned into a year-round fish catcher; especially when the fishing gets tough. This is exactly why it’s one of my primary tools when I’m guiding inexperienced anglers.

If you can avoid the following common mistakes while fishing a wacky rig, I genuinely believe you’ll discover an entirely new dimension of your finesse fishing repertoire.

No. 1: Imparting too much action

This is number one on the list because I see it so frequently. It’s important to understand that a wacky-rigged stick worm has an inherent action all on its own; there is very little rod movement needed to maximize your number of bites.

I’ve spent countless hours experimenting with the wacky rig when sight fishing shallow-water bass. They’re not on beds, but rather suspended in the upper portion of the water column. I’ve found that almost every single bite occurs as the bait is falling on a slack line. Anytime I move the bait too aggressively, the bass quickly swims in the opposite direction.

The most effective way, in my opinion, to fish a wacky rig revolves around popping the slack in your line—much like you would fish a drop shot. You’re not trying to make your worm dance because it’s doing that on its own, whether you realize it or not. Sharply lift your rod tip a few times with slack in the line and when you feel the weight of your hook and worm, stop what you’re doing and let it fall on a slack line.

This method takes advantage of that special, undulating action for which a wacky rig is known. Essentially, you’re only raising that wacky rig in the water column for the sole purpose of letting it fall on slack line again because again, that’s when most of your bites will occur.

No. 2: Detecting bites with your rod tip 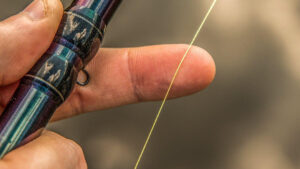 While it may work in some scenarios, you’re going to miss a lot of quality bites if you’re depending on your rod for bite detection. That might sound a little odd to some, but hear me out.

Because your bites will primarily happen as the wacky rig falls on slack line, you’re not going to feel most of your bites. If you’re relying on the fish to move your rod tip, it could have your bait in its mouth for several seconds before you’re able to set the hook. This results in two things and neither are good: The fish will wrap your line around nearby cover or even worse, it could swallow your hook.

To avoid both of these situations, it’s imperative to become a line-watcher at all times; don’t zone out or get distracted. Wacky rig bites are often characterized by a quick line jump or lateral movement in your slack line. In my experience, those quick jumps are often smaller bass while the straightening-out and sideways movement of your line are indicative of big bass.

I fish my wacky rigs on a 7-foot, medium-action spinning rod most of the time and no matter what, I always have my index finger in constant contact with my line. I feel small “ticks” and “bumps” much quicker that way, as opposed to waiting for the bite to affect my rod tip.

While wacky rigs are designed to fish slowly, that doesn’t always mean that each cast should last two or three minutes. I prefer to fish ‘em slowly, but quickly. I’ll explain what I mean by that.

Through my experimentation, most of my bites not only happen on the fall (as we discussed earlier), but they happen on the initial fall. So after the cast, if a bass is going to eat it, I expect action within roughly 15 seconds after I flip my bail over. It’s a target-oriented approach that allows you to hit the most high-percentage spots at a rapid pace.

Now, I could spend four or five minutes on each piece of cover making repeated casts, but I’d rather play the numbers game and put the odds in my favor. I’ll run down the bank, skip under the corners of a few docks, shake it a few times, let it fall and if nothing happens, I’m on to the next target.

The drawing power of a wacky-rigged stick worm is impressive, to say the least. I routinely see bass swim three or four feet to attack the bait on the initial fall. If you’re in a great-looking spot or you’re sight-fishing a big bass, sure—make a bunch of casts at it. But it’s easy to accidentally waste a bunch of time when you’re probing the shallows with this rig, so time and efficiency is always something to keep in the back of your mind.

People assume that, because of my job, I have an extensive tackle collection inside of my boat. But nothing could be further from the truth; I embrace simplicity. If I can use a single hook for several different applications, I’m all for it. But after some tough lessons learned, I strongly suggest—like, really strongly suggest—getting some legitimate hooks specifically designed for wacky rig fishing.

I have had a really tough time finding a wacky rig hook that works for me. There are a bunch out there and I’ve tried darn-near every one of them, but I was losing far too many nice bass for my liking. To be honest, it was infuriating. I am not a proponent of those small, circle-style hooks you’ll often see because the bend isn’t big enough to fit around the jawbone of a bass weighing over 4 pounds.

I rarely, if ever, use the word “perfect” in my articles but I do believe that a No. 2 VMC Neko Hook is the perfect wacky rig hook. That’s not some dumb, thinly veiled sales pitch, either. I have not lost a fish since using these hooks. Regardless of how you set the hook, that little 3-degree offset seems to hook nearly every bass that bites.

Take it for what it’s worth, but skimping on your wacky rig hook will come back to bite you eventually. It has happened to me many times in the past.

No. 5: Stressing about colors 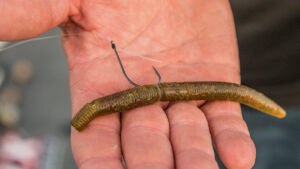 We all have that buddy who brings a dozen colors of the same worm on fishing trips. I used to be that guy when I was younger. But man, I’m being completely straightforward when I say this: Just go fishing. If a bass won’t bite green pumpkin, watermelon red or junebug, I’m probably not going to catch her.

I’m not some sort of scientist, but I’ve messed around with all sorts of colors on my wacky rigs and I can’t tell you a single one that outperforms another, as long as the conditions are right. My basic color rundown is simple:

I use watermelon red when I’m fishing clear or lightly stained water under sunny skies. Sunfish have a little bit of red on ‘em and the added flake puts off some extra flash when the sun’s out.

I use green pumpkin when I’m fishing clear or lightly stained water under cloudy skies. I think it puts off a more noticeable silhouette, which gives the bass a better bead on it.

I use junebug or some type of black/blue (whatever I grab first, really) whenever I’m fishing in dirty water. I might opt for a little flake when it’s sunny.

That’s about as complicated as I make it. I’m not claiming to be the wacky-rig expert but I’m just trying to cut down on the confusion for other anglers. If you’re constantly stressing about your color and you’re worried that you’re throwing the wrong thing, your whole mindset is ruined and your technique—which is much more important—gets sloppy. So just stick with three or four colors and roll with it. I guarantee you’ll catch plenty of bass.