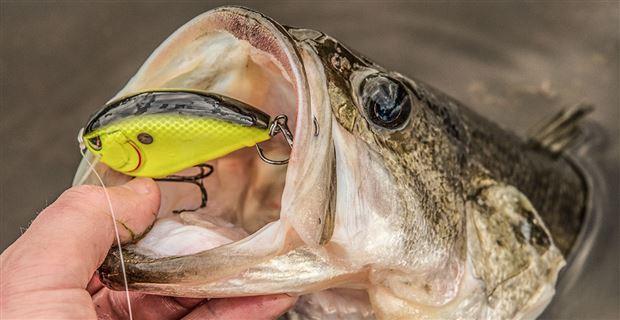 Crankbaits can do a lot of damage throughout the year. Heck, I’m sure I use ‘em too much at times because I know what they’re capable of catching. The one advantage of my stubbornness, however, is that I’ve learned a lot about how to keep big crankbait fish buttoned up when they bite.

I’ve messed up a lot over the years and every lost fish has taught me a lesson. That’s exactly why I’m writing this article: To help you learn from my mistakes.

As you read through this piece, make mental notes and try to avoid these common blunders.

They dig at the boat and break your line

I know this sounds painfully obvious, but hang in there with me for a second.

Crankbaits have a tendency to ignite schools of fish, which means the action can get hot and heavy within a matter of seconds. When you start getting bites on nearly every cast, it’s nearly impossible to make yourself slow down and check your line.

Here’s the problem I see a lot: When these fish get fired up, they’ll choke on your plug. It’s one of the best sights in fishing in my opinion. But as that fish is thrashing around throughout the fight with your crankbait gagged, its teeth are rubbing a bad spot in your line. You unhook your fish, release it and immediately make another cast.

Another fish bites it, you have ‘em close to the boat and oops—your line snaps like a .22 long rifle. All because you didn’t check your line after your last fish catch.

You’ll often see me check my line after releasing a crankbait fish, but I don’t often check it with my fingers. They’re covered in fish slime and water, so it doesn’t give me the sensitivity I’m accustomed to. Instead, I’ll quickly run the line through my lips. If I feel any roughness, I sit down and re-tie, no matter how hot the fishing is.

Time for an overused cliché: You get what you pay for. At least most of the time.

Some lure manufacturers put cheap hooks on their crankbaits because it cuts costs and saves the consumer money. There’s nothing necessarily wrong with that, but you will lose fish when you use these cheap, tinfoil-like hooks. I promise. I know you want to rip that plug out of the package and get to casting, but take 30 seconds and change those hooks.

When I’m on a good crankbait pattern, I’ll change hooks two—maybe three—times per day. It may sound a little excessive, and maybe it is, but I have noticed a huge improvement in my hookup ratio since adopting this practice. My personal preferences are Gamakatsu, Trokar, Mustad or VMC treble hooks. They all make good stuff.

You’re relying too much on the drag

I keep the drag on my cranking reels cinched as tightly as they’ll go. I’ve had experiences in the past when the drag would delay just a split second and pull the hooks from the fish’s mouth—especially when they make a last-second head turn at the boat.

This is likely a matter of opinion, but I feel like I have much more control, especially on a short line, when my drag is cinched. I prefer to use my thumb bar as an impromptu drag system so I can quickly react to any boat-side surges a bass may make.

If for any reason your drag system delays, even by a split second, there’s a good chance you’ll come away with a broken heart and a fish story.

Old habits die hard, but there’s nothing like losing a big crankbait fish to quickly break your habit of setting the hook like you would a jig or Texas rig. Your hookset motion is imperative to landing more fish. I see it time and time again when I take folks fishing.

Think about it like this: If you swing up when you get a bite, you’re driving the top of the crankbait—the part with no hooks—directly into the hard patch on the roof of the fish’s mouth. Your plug will bounce right out of their mouth like a bad rec league bank shot.

You may hook the fish for a few cranks of the handle, but you’ll lose the large majority of them once that bass shakes its head. The party’s over.

Instead of some dramatic hookset, just lean into the fish and keep your rod tip low. This will give the hooks a bit longer to penetrate and dissuade the bass from jumping and using the weight of your lure as leverage to throw the hooks.

This may be the most common mistake of them all, so it’s absolutely worth discussing.

For a little real world example, my girlfriend hooked what I estimate to be a 7-pounder a few weeks ago on a crankbait. I saw it come up and flash. The teacher (me) didn’t do a great job at explaining this part, so when I looked at her on the back deck of my boat, she looked like those folks catching tuna on TV. She was giving that sucker every ounce of blonde-haired fury she could muster.

Her line was in good condition. She was using brand new hooks. Her hookset was textbook. But she horsed the fish and it came unbuttoned about halfway to the boat.

Fighting crankbait fish is all about patience, in my opinion. I don’t try to bring ‘em in when they’re still hot and thrashing all over creation. Ideally, I want that bass laid up on its side after I’ve worn ‘em out. I’d be willing to bet that of all the crankbait fish you lose, most of them occur within arm’s reach of your boat. That’s because we get impatient.

If I hook a fish over 5 pounds on a plug, it might take me three or four minutes to fight it before I even think about landing it. Keep your rod tip low and walk in circles around your boat if need be.

Although some anglers do in hopes of snagging them with more hooks, I prefer not to pull in the opposite direction of the fish. If it wants to go right, you go right. If it wants to go left, you go left. It’s just like dancing with a pretty lady—just go with the flow, man.

The next time you’re bowed up on a crankbait fish, think back to this article and try to use some of these tips. I wouldn’t have written this article if they didn’t work, so give them a shot. I really believe you’ll see a noticeable difference in your success.