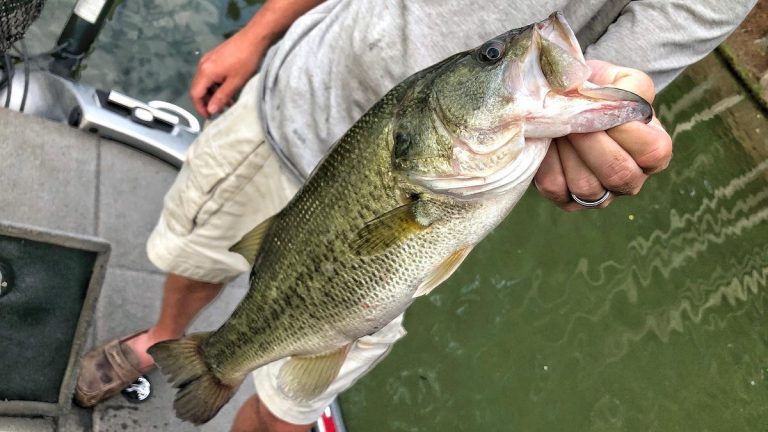 Although I own a bass boat and fish primarily as a boater these days, I have spent a considerable amount of time fishing from the back deck of someone else’s rig. I wanted to tournament fish when I was in my late teens, but I hadn’t quite saved up enough money to register as a boater, so I entered as a co-angler. After my first season fishing the now-defunct Bassmaster Weekend Series, I ended up finishing first in the state. Perhaps more importantly, I traveled to all of the tournaments with a lot of excellent anglers and I got to practice for days at a time and learn how to become a more effective co-angler.

Catching fish behind someone is tough. It’s even tougher when the dude in front of you is a Hoover vacuum cleaner and seemingly catches every fish in the pocket. To be honest, this really frustrated me when I started to fish as a co-angler. Not calling the shots or being in control drove me absolutely insane. And for whatever reason, I’d get spun out when my boater caught a fish.

Now that I’m older and more mature, however, I look back at those co-angler days and realize how much they shaped me as an angler. It made me accustomed to tough fishing which, believe it or not, was an incredible learning experience. It taught me how to button down, focus and get bites when nothing seemed to be working.

These days, although I don’t really fish tournaments anymore, I’ll definitely hop in the back of a buddy’s boat for an evening of fishing. I live about 30 seconds from the biggest boat ramp on the lake, so I always have a handful of rigs ready to go in case a friend invites me on a last-minute fishing trip.

I wanted to run through the baits and rigs I always keep rigged for co-angling. If you’re not prepared, it can be really easy to turn into a pack mule and bring way too much tackle. I believe if you stick with these options, you’ll travel lighter and always be ready to jump in a friend’s boat.

Shaky head with a straight-tail worm

Call me Captain Obvious, but man, it’s awfully tough to beat a shaky head when you’re on the back deck. It’s a finesse presentation that looks very natural underwater and perhaps most importantly, it’s an incredibly versatile option.

When I was fishing tournaments as a co-angler, I never left the boat dock without a 3/16-ounce shaky head tied and ready to cast. I’d either have it paired with a watermelon red or blue sapphire-colored Zoom Trick Worm. Those were the only two colors I felt I needed. If it was clear water, I’d throw the watermelon red. If the water was muddy, I’d choose the blue sapphire.

I quickly realized how valuable of a tool it was. Whether my boater had me against the bank or out over brush piles, this shaky head would consistently get bites and as a co-angler, that’s really all you can ask for. I could skip it accurately and I could also make fairly long overhead casts with it.

As much as guys like to “power fish” now and make fun of finesse fishing, it’s actually pretty easy to catch fish behind guys with the shaky head. While they’re dive-bombing bass with big Texas rigs and oversized jigs, just skip this little snack around and you’ll probably out-catch your boater.

Gear recommendation: I keep my shaky head on a 7-foot, medium-action spinning rod spooled with 15-pound braid and an 8-pound fluorocarbon leader. I choose braid because it drastically increases your casting distance, which can be a huge deal from the back deck. 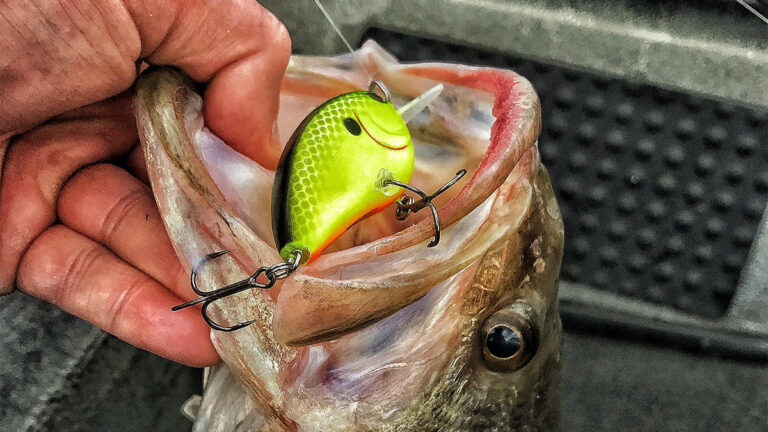 I’ve learned that you can have a bunch of fun pitching a small, shallow-running crankbait around boat docks. Every boater I have ever fished behind has fished boat docks for at least 5 hours per day. I don’t know what it is about those dang things, but they’re magnets for a tournament angler around here.

While those dock bass get throttled with pressure from traditional bottom-contact presentations, they don’t see crankbaits very much; especially smaller ones. While your boater skips and pitches to his heart’s content, go right behind him and burn a small plug around the edges of every boat dock. This is a great way to catch a giant.

Repeated casts are very important with this technique and I really think the key is simply ticking the bass off enough to make it swat at your crankbait. Because your boater will probably be fishing something slower, you should have plenty of time to make three or four casts down each side of the dock before moving on.

As your boater moves to the next dock, remember to make a cast behind the boat parallel with the front of the previous boat dock. I’ve noticed that when fishing boat docks, most guys start reeling their jigs or Texas rigs up before they even reach the front posts, so those fish haven’t really had a bait presented to them. This is a great way for a few bonus fish throughout the day.

Gear recommendation: For my small crankbaits, I routinely use something like a 1.0 Strike King KVD Squarebill or a SPRO Little John 50. I stick with either bluegill, perch or shad colors. I’ll rig them on a 7-foot, medium-action casting rod with 12-pound fluorocarbon. 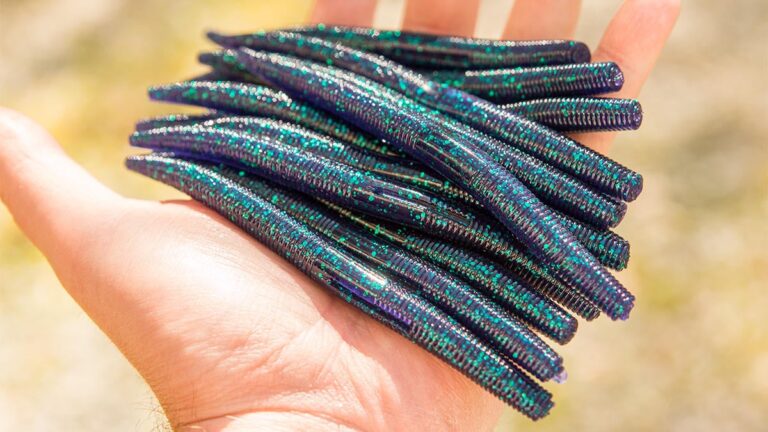 Another versatile and necessary tool for the back deck is a stick worm. I always bring these along because I’m able to do several different things with them and again, versatile baits allow you to pack lightly and spend less time digging through your stuff.

Did I miss anything?

All joking and movie references aside, you really need to have a few bags of these when you’re fishing as a co-angler. Again, I keep my color selection incredibly simple and stick with watermelon red or some sort of black/blue combination. The slow-falling action of these worms is a proven bass catcher and an excellent way to bust ’em from the back deck. Let ’em fall through holes in the grass, pitch ’em around small points and pockets in the grass, wacky rig ’em around dock posts or bite ’em in half and thread them onto your favorite Ned head. The possibilities are nearly endless.

Gear recommendation: Although you can throw these on a bunch of different setups, I think your most versatile option is a 7-foot, medium-action spinning rod spooled with 15-pound braid and an 8-pound fluorocarbon leader. If you notice, that’s the same setup as the shaky head deal we talked about. Remember, versatility is key and you don’t always need one rod per technique. For the stick worms, I use all different kinds but currently in my little go-bag I have Yamamoto Senkos, Strike King Ochos and YUM Dingers. 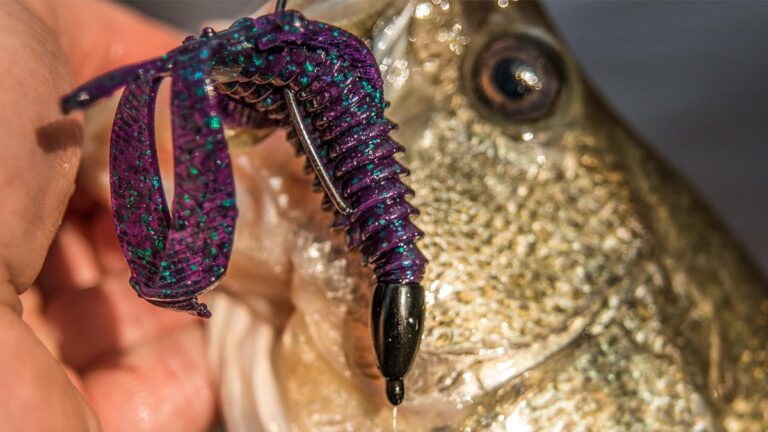 I really think this is something that every angler on the planet should always have rigged up. I can’t imagine going fishing without this in my arsenal, no matter the circumstance. When fishing as a co-angler, however, it’s important to use this in a strategic manner. If you pay close attention to what your boater is doing, this is a good way to catch the biggest fish of the day.

Years ago when I did the co-angler deal in those regional tournaments, I got sick of seeing jigs get skipped underneath boat docks. I know boat docks hold fish and we’ve already discussed all of that, but some tournament days just felt like that “Groundhog Day” movie, man. Every day just seemed like the same thing sometimes.

But then I started to pick up on something really important. I began watching every cast my boater made. I’d pay attention to each dock post he missed and would make a mental note about it. When it was my turn, I’d pick up a little ol’ Texas rig and hit all of those dock posts he ignored. And it sure paid off. This paid for a lot of my books in college.

I prefer a lightweight Texas rig and a compact creature bait for a pretty simple reason: If there’s a fish underneath that boat dock, that poor joker must feel like he was just under some sort of aerial assault. Jigs flying everywhere, water splashing… the whole nine yards. I figured that if I could present something much subtler and quieter than my boater just did, maybe I could get lucky and fool that fish.

Gear recommendations: I like to use a 7-foot, medium-heavy action casting rod spooled with 17-pound fluorocarbon. On my Texas rig, I prefer a 3/16-ounce tungsten weight with a 4/0 offset EWG hook. I always keep several packs of Strike King Rodents on me for this technique, too. I think their unique coffee scent might help me fool an extra bass or two during the day. 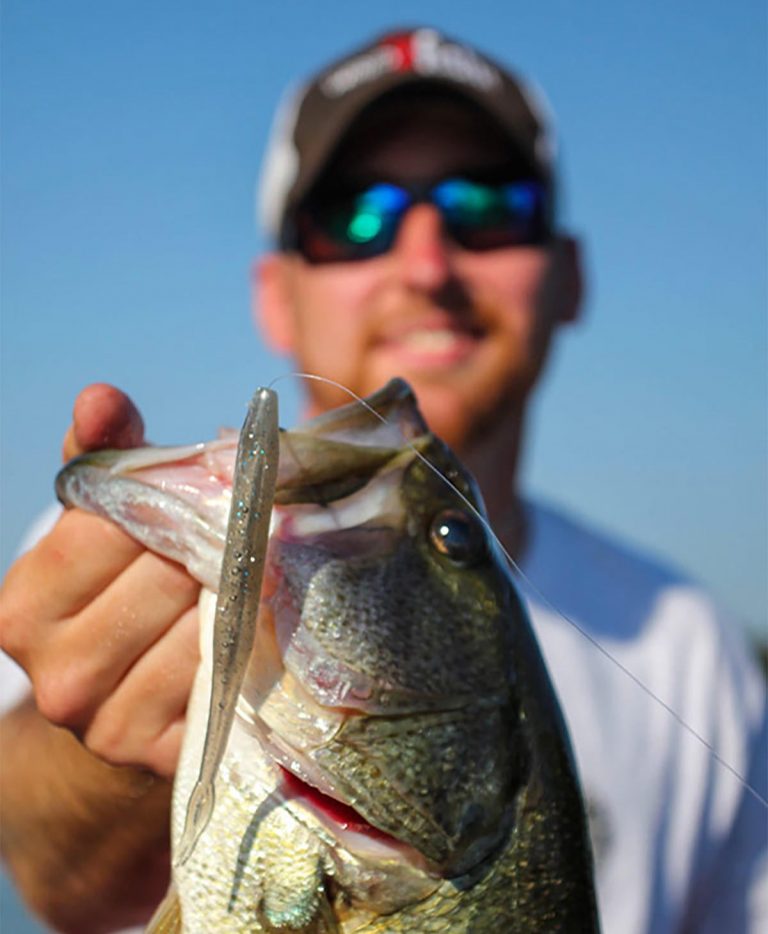 This is my early morning go-to option nearly every time I’m fishing behind someone. Around here, most everyone is going to start the morning throwing some sort of topwater like a hollow-body frog, a popper, a buzzbait or something similar. Those baits catch big fish and it’s certainly no secret.

But instead of targeting the same section of the water column as your boat, consider a weightless soft jerkbait early in the morning. I kind view them as a pseudo-topwater offering. Some mornings, those bass just don’t want to come all the way on top to grab a topwater lure and that’s why I like the soft jerkbait so much. It still targets those more active fish, but it doesn’t “ask” as much of the fish, if that makes sense. It looks like an easier meal much of the time as it slowly falls between twitches and bass are hard-wired to attack wounded prey.

As long as we’re starting the morning in less than 12 feet or so of water, I’m going to pick up a soft jerkbait nearly every time.

Gear recommendations: This might sound familiar by now, but I like to use a 7-foot, medium-action spinning rod spooled with 15-pound braid and an 8-pound fluorocarbon leader. Again, that’s the same rod as my shaky head and stick worm. So it allows me to bring just one rod for a bunch of different techniques. I had to do this a lot when I first started because I was broke and only owned three or maybe four fishing rods. I love a Zoom Salty Super Fluke and a X Zone Lures Whiplash Shad on a light-wire 4/0 offset EWG hook.

I totally get that co-angling can be difficult and frustrating at times. For me, the most difficult part was and still is packing the “right” gear before a trip. I got sick and tired of junking up my boater’s rig with a bunch of unnecessary tackle, so I made a promise to myself to keep things simple. I’ll sometimes grab a few things not mentioned in this article, but if you’re just looking to get bites and have a bunch of fun, you don’t need to look much further than these options. Even better, perhaps, is that you only need three rods for these rigs.