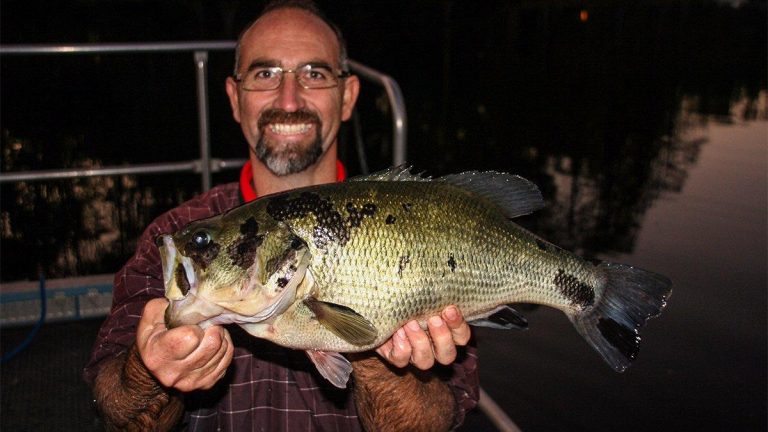 We’ve received several hundred photographs over the years of both largemouth and smallmouth bass with black splotches all over their bodies. Many of them are submitted by anglers who are sincerely worried about the well being of the bass and the fishery from which they were caught.

We consulted leading fisheries biologist Steven Bardin in hopes of answering one of the most popular questions in Wired2Fish history: Why do some bass have black splotches?

“The black splotches are caused by a condition known as melanosis,” Bardin said. “And to be distinctly clear, it is not the same as melanoma, which is a human skin cancer. Melanosis occurs when, for whatever reason, a skin cell cannot regulate pigment production like it should. Melanin production in these cells is greatly increased resulting in hyperpigmentation and a black spot. The inverse is also possible where cells do not produce melanin resulting in hypopigmentation.”

Skin cells on a fish naturally change color depending on sunlight, stress, time of year, depth and water turbidity. You’ve probably noticed that bass can change colors while in a livewellâ€”it’s the same process. The difference is how the pigmentation is regulated.

There are several potential causes of each melanosis case, which is why you cannot identify a single, all-inclusive answer as to why a fish has black splotches. Causes vary from genetics, cellular injury and poor water quality resulting in stress. To determine the exact cause, a tissue sample has to be observed under microscope.

“We have seen an increase in reported melanosis cases throughout the country over the past 30 years,” Bardin said. “Almost all of these cases are adult-sized fish measuring 10 inches or more in length. This could mean as the skin cells age, their ability to regulate melanin is decreased. Or, it could be that the fish had visible black spots as a juvenile but was not observed by an angler.” 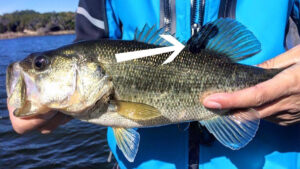 Genetically caused melanosis could explain why we see certain regions of the country experience this phenomenon in greater numbers.

“As a trait like melanosis becomes increasingly more abundant in a regional gene pool, it will naturally result in more individuals exhibiting the trait,” Bardin said. “Genetic melanosis is also seen in the aquarium trade as zebrafish, platy and swordtails have been bred to exhibit this trait.”

While there is some relation between melanosis cases and poor water quality, it’s very important to avoid jumping to conclusions.

“There are areas like the Susquehanna and Potomac Rivers where toxins have been blamed for poor water quality at times,” Bardin said. “In these river drainages, melanosis has dramatically increased along with several reports of fish with different skin lesions, large growths and deformed jaws. But here’s the big thing to consider: Is melanosis present because of a toxicant or is melanosis present and there’s a toxicant? I see melanosis fish all the time in private lakes I manage, even with pristine water quality.”

Facts you need to know

Because the fishing community is filled with so much misinformation regarding melanosis, it’s important to set a few things straight.

Steven Bardin is a private fisheries biologist who owns Texas Pro Lake Management. He holds a Bachelor’s Degree in Freshwater Biology and a Master’s Degree in Fisheries Science. He has spent the last decade teaching lake owners how to raise trophy largemouth bass in various conditions. You can follow him on Facebook and Instagram.